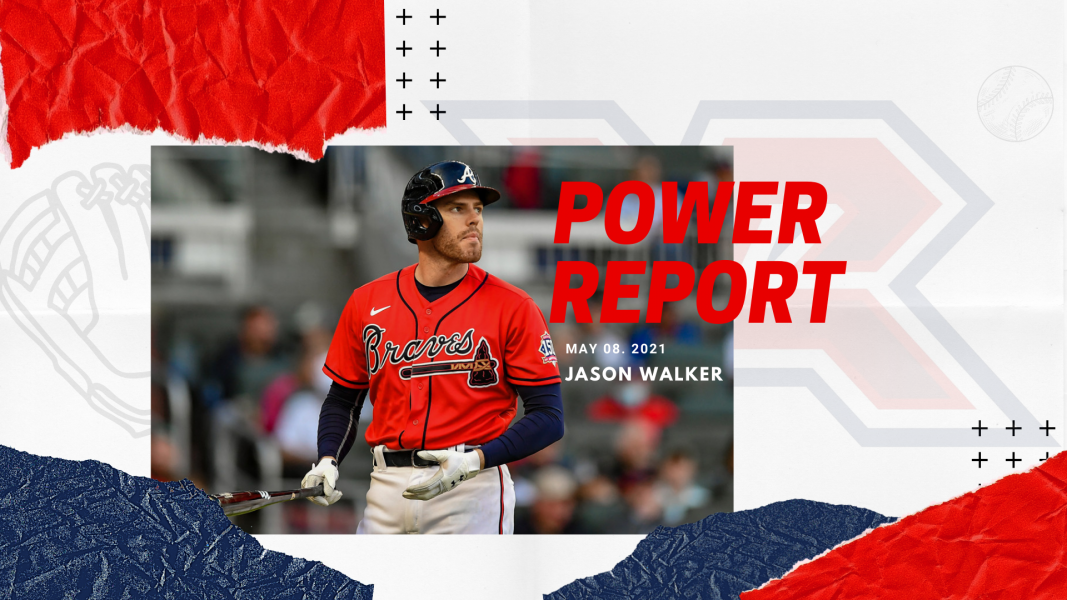 ATLANTA, GA - MAY 07: Atlanta first baseman Freddie Freeman (5) reacts after striking out during the MLB game between the Philadelphia Phillies and the Atlanta Braves on May 7th, 2021 at Truist Park in Atlanta, GA. (Photo by Rich von Biberstein/Icon Sportswire)

One of the hardest things to do in fantasy sports, especially fantasy baseball, is to know when a player is going to get hot, or if a player is just bad, or unlucky. Fortunately, modern baseball statistics have helped in that area, with sites providing hard hit metrics, contact rates, and the usual amount of outcomes. This has given us the opportunity to see who could be breaking next. In the seasonal leagues, this would allow to target someone perhaps on the waiver wire for streaming or as a trade target. In daily fantasy sports, this can help identify who has been unlucky in the power department and take advantage of their likely value before anybody knows they are getting hot.

To do this, we’ve taken the expected results from a hitter’s batting profile over the last month and measured that against what his actual results were. This creates an easy metric called GAP. This higher the GAP, the more “due” a hitter is.

Let’s take a look at the current GAP leaders. (minimum 40 ABs). I have highlighted some of the folks I want to talk about below.

Second Base. Coors Field. Ryan McMahon is the third rated second basemen, according to our friends at FantasyPros.  And yet, according to The Power Report (TPR), he has not received all he has been due.  He is on 95% of rosters, so this isn’t a waiver wire play, but someone may feel like they are selling high on McMahon, when the truth is, he has GAP to close, more stats to come, and could end up being the #1 2B in fantasy very soon.

San Diego’s Jake Cronenworth hits the trifecta criteria: significant GAP (60), great contact rate (82%), and fly ball rate (43%).  Unlike McMahon, Cronenworth doesn’t have the Coors Field factor, and isn’t ranked highly at all right now, according to FantasyPros. Cronenworth is ranked 19th there, despite being on 82% of rosters.  He is a buy low candidate for sure that like won’t cost as much.

Want to take a flyer on a shortstop with power?  Take a shot at Willy Adames in Tampa.  Adames is likely available on a waiver wire near you, spotted only on 9% of rosters, per FantasyPros. Why? Because he has a ton of GAP and does not make contact at all, connecting on only 61%. This is windmill territory, and Adames has struck out 40 times in his 108 at-bats so far.  However, a 52% fly ball rate, mixed with a massive 200 expected power means that, if he gets a run of contact going, it’s a home run blitz.  Since we know Tropicana Field (Adames’ home park)  is below average for home runs, Adames is an excellent streaming option when he is in a better park and a good stash candidate if you are in a deeper league.

Oakland’s Jed Lowrie re-appears on TPR, signifying both his consistency and opportunity. Jed remains a high contact, hard contact second sacker, is ranked 10th among second basemen by FantasyPros, and is only on 52% of rosters. He is a solid guy who should not be available in over half the leagues out there.

Marcus Semien, long time Lowrie teammate and now Toronto Blue Jay shortstop, appears on TPR.  Semien is 7th ranked among shortstops over at FantasyPros, and is on plenty of rosters, but his sub 800 OPS and current GAP underlines opportunity.  Semien’s fly ball rate is 57%, he plays in a ballpark that is above average for home runs (Toronto’s Rogers Centre), and has a solid 72% contact rate. Vets like Semien can get overlooked for the shinier toys and younger players with more upside, and his middle-of-the-pack power numbers underrate him overall, but he could be a sneaky steal in a deal with a team that may feel he is fading.

Sometimes, even the current MVP appears on TPR.  Atlanta’s Freddie Freeman does this week, and maybe it should surprise given the extremely slow start the Braves first baseman has had. Freeman is ranked 22nd among first basemen by FantasyPros, and has an OPS of only .733, hardly the work of an MVP.  The first things to check when your superstar is struggling are if he is making good contact and is he getting the ball in the air.  Over his last 100 at-bats, Freeman has a near-elite 79% contact rate and his fly ball rate is 37%.  Freeman’s OPS won’t stay down that long, but someone may panic and try to deal him.  With Atlanta’s Truist Park an above average run producing park, Freeman may be ready to ascend again.