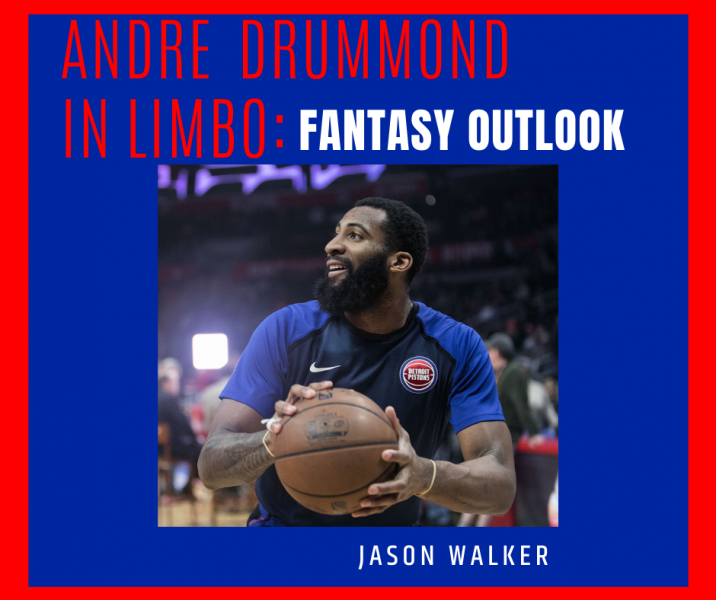 Andre Drummond is in a unique situation, nestled expensively in the front court of the currently 14-22 Cleveland Cavaliers.  Drummond is supremely good at rebounding the basketball, currently leading the league in percentage of available rebounds gathered (35%), and can still block shots, averaging 2.2 per game.

However, despite that, the Cavaliers chose to bench the former Pistons big man after their acquisition of Jarrett Allen from the Nets last month, announcing publicly that this was in order to try and trade Drummond before the trade deadline (March 25th).  Now the Cavs are in the poor position of trying to trade somebody that everyone knows is a lame duck.

There are several things limiting Drummond's trade partners.  One is that he is costly at 28 million dollars, which limits the amount of teams that can participate in dealing for him as most teams are under cap restraints when it comes to trades.  Second is related to the first in that the type of team that would likely be interested in a short-term rental (Drummond is an unrestricted free agent after this season) are winning teams that don't necessarily want to trade the level of player salaries needed to match Drummond's.  Third is that the Cavs also want draft picks in any trade for Drummond, further narrowing the list of teams that may match since they would not only have to give up players to match Drummond's cap slot, but also part with picks.  This is especially tougher for winning teams since low-cost draft picks are usually the only way the teams can add potential talent on the cheap.

So despite the highly public pronouncement of the desire to trade Drummond, there might likely be no deal for the Cavs. The Cavs, according to reports from ESPN, are looking to hold the rope until the deadline, rendering Drummond fantasy irrelevant should that come to pass.

The other option for the Cavs would be to buy out the remainder of the season, negotiating a lesser sum of Drummond's contract value in return for a release, similar to the maneuver that the Detroit Pistons engaged in recently with Blake Griffin.  However, since Drummond is a free agent anyway (and the Cavs believe he has value) driven by his still elite production on the glass, the Cavs may be in no hurry to do anything.  They could just as well buy out Drummond's contract at the deadline on March 24th or 25th as they could on March 9th.  It is also possible that a favored outcome for the Cavs is sitting Drummond to the point where he waives more of his financial right in order to gain his freedom.

If Drummond does get bought out, two teams have been reported to be interested, somewhat publicly: the Chicago Bulls and the Los Angeles Lakers. One would believe that Drummond, after years of losing teams, would be more interested in the Lakers.  If that were the case, it would likely be that Drummond still grabs his usual share of rebounds, considering he has never fallen off even with other prominent bigs playing with him. He would likely take a little from LeBron James, and probably from Anthony Davis as well. Drummond, offensively, is not the kind to call for the ball, so it shouldn't impact much there, but it would also greatly impact Marc Gasol and Montrezl Harrell, who almost certainly would see significantly less time with Drummond in tow.  If Drummond were to end up in Chicago, the biggest impact would befall the current center, Wendall Carter, Jr.

In either destination, Drummond will do as he always does:  dominate the glass and score from close range. The biggest question is how many games will be left when he finally lands?