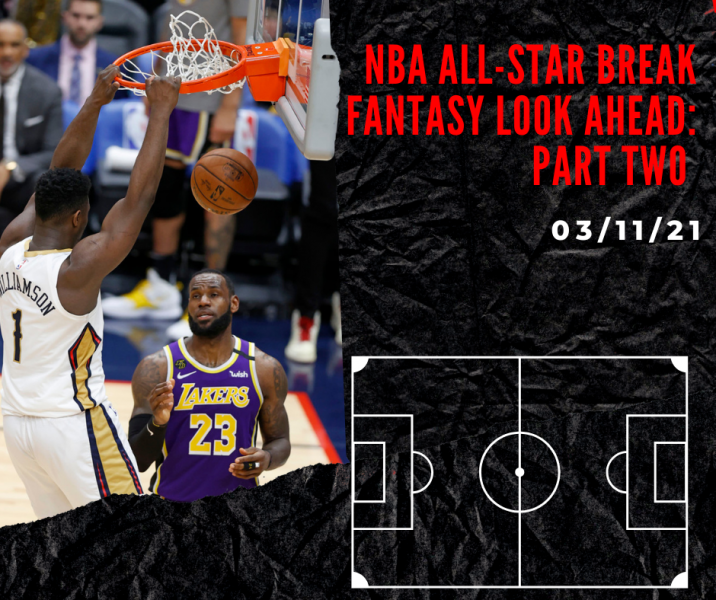 As the NBA returns from its All-Star weekend, the league has already shown some interesting highlights from the first half of the season.  However, can they be counted on moving forward coming out of the break as well?

We looked at a few examples in Part One, now let’s tackle a few more on display tonight. Let's take a look.

The Pelicans went into the All-Star break in a fury offensively, scoring 122.7 points per 100 possessions for the month of February, leading the entire league in that department.  Zion Williamson emerged as a top scorer in the month, leading the Pelicans and in the top ten in the NBA with a 27.3 points per game average. Not far behind was Brandon Ingram, who leads the team in usage for the season and averaged over 24 points per game himself in February.  Lonzo Ball joined that duo as highly effective offensively, knocking down almost four (4) three-pointers per game, and averaging 16.5 points, 5.5 rebounds, and 4.5 assists per game last month.

Defensively, the Pelicans gave up almost as good as they took from opponents, giving up 120 points per 100 possessions, leading to very fantasy rich games.

With Williamson blossoming, and the team pretty much set rotationally, the trends that were established last month should continue. New Orleans played a tough first half schedule and have a slightly easier schedule the rest of the way (as it relates to the rest of the league), providing excellent streaming options in games against New Orleans as well as the Pelicans themselves.

The Return of Marcus Smart to the Celtics lineup

Marcus Smart has missed 18 games this season with a calf strain but returns as the NBA returns to play. In his absence, there can be some question as to who his return impacts the most, statistically.

We have seen “the Jaysons” continue to grow, with Jayson Tatum and Jayson Brown both receiving All-Star nods to go along with their excellent statistical impact.  But Smart’s presence didn’t detract from the Tatum/Brown’s production.  In fact, both Celtics All-Stars fantasy points per game went down when Smart did.

However, one Celtic player statistically benefitted from Smart’s absence. Kemba Walker has a 28.8 usage rate with Smart off the court this season and 23% with Smart present.  To be fair, Walker only played 100 or so minutes with Smart on the floor this season to date, but it bears watching to see if Smart’s return continues to lower Kemba’s stats.

Under Tom Thibodeau, the Knicks have become a grinding, difficult matchup, which will greatly limit peripheral player production (especially in the backcourt) among opponents and lower the ceiling on the stars that will matchup with the Knicks.

The Knicks held opponents to a league low 43.4% shooting percentage and were fourth overall in three-point defense at 33.4%. The Knicks also play at a slow pace, averaging only 97.82 possessions per 48  minutes which, combined with the tight defense, allowed only 104.2 points per game, which led the league in February.

This is the trademark of a Thibodeau coached club, so there is little to indicate that the team would suddenly change. One bit of headwind might be that the Knicks did register the easiest strength of schedule for the first half of the season and forecasts one of the toughest in the second half.  So while the better competition could challenge the Knicks position in terms of where they will ultimately rank, the slow pace of play and dedication to the defensive side of the ball means it will still be a sub-optimal place to look for strong fantasy plays, both per game and weekly lineups leagues.