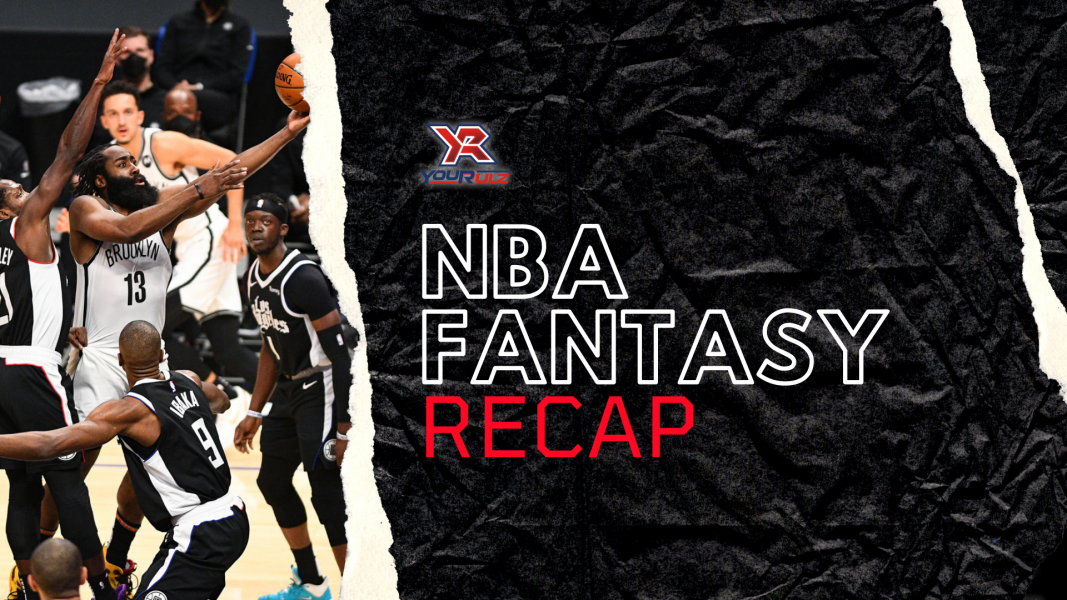 LOS ANGELES, CA - FEBRUARY 21: Brooklyn Nets Guard James Harden (13) drives to the basket during a NBA game between the Brooklyn Nets and the Los Angeles Clippers on February 21, 2021 at STAPLES Center in Los Angeles, CA. The game was played without fans due to the COVID-19 pandemic. (Photo by Brian Rothmuller/Icon Sportswire)

The Obvious:  Jason Tatum, Jaylen Brown, and Kemba Walker took 68 of the 98 shots for the Celtics, meaning that you can’t count on anyone else for scoring outside of those three.

For the Pelicans, Eric Bledsoe continues to start, but is an afterthought offensively behind Lonzo Ball’s playmaking and Brandon Ingram/Zion Williamson’s usage.  If you toss in JJ Redick’s availability and Josh Hart’s Swiss-Army-knife game, there isn’t much more that Eric Bledsoe can produce.

Fantasy Watch:  If Robert Williams ever started or even saw Tristan Thompson minutes (30), his fantasy production would be worth snagging. Williams is an active, shot blocking, rebounding force and can finish above the rim.

That same sentiment goes for fantasy favorite Willy Hernangomez, who produces a lot in small shifts everywhere he has landed, including the Knicks and the Hornets. Filling in again for Steven Adams, Hernangomez snagged an impressive 13 rebounds in 22:32 minutes.

The Obvious:  The Cavs continue to stumble, losing 10 in a row and registering the worst defensive rating for the month of February (123.5 points per 100 possessions). Jarrett Allen and Collin Sexton both played over 40 minutes in this one, giving Allen watchers the full workload they always dreamed of:  26 points on 11-11 shooting, 17 rebounds and three blocked shots.

The problem with targeting bad teams like the Cavs is that anyone on the opposition can go off, sometimes limiting the ceiling on how the top players play. For example here, Shae Gilgeous-Alexander (SGA) didn’t have to take more than 15 shots, but still got 31 points and nine assists. Bench Bunch members Mike Muscala and Kenrich Williams also scored well (20 and 18 points, respectively), but that almost certainly had to do more with the competition and not a change of focus from the Thunder.

Fantasy Watch:  Hamadou Diallo is coming off the bench again, after a stint starting while SGA was out a few games.  However, he still produced with 15 points in 25 minutes and is worth watching in case something again happens to SGA or more minutes open up in the Thunder backcourt.

The Obvious:  Two of the league worst offenses matched up to produce the lowest total on the board for the night.

With multiple injuries, Magic center Nikola Vucevic continues to dominate the Magic offense, taking 27 of the team’s 81 shots on his way to a 37 point, 12 rebound night in 36 minutes.  Playing with low-usage co-starters like James Ennis, Al-Farouq Aminu, and Michael Carter-Williams will continue this trend.

Jerami Grant was highly efficient again for the Pistons, scoring 24 points on 8-16 shooting and will continue to be free to lead the Pistons in scoring now that Blake Griffin won’t be on the court.  That will also boost his potential rebounding output as well.

Fantasy Watch:  Josh Jackson played 32 minutes off the bench and took 23 shots for the Pistons, in line with Jackson’s volume shooting game. He is a high activity player, so while Wayne Ellington and Dennis Smith, Jr. start, if Jackson can maintain this level of playing time alongside Grant, he will be a shooting percentage drag but a volume scorer.

The Obvious:  With everybody back for the Sixers, the usual distribution on offense was on display, with Joel Embiid taking 20 shots, Tobias Harris 17, and Seth Curry and Shake Milton with 12 and 11, respectively. Ben Simmons took 11 and made nine, for an efficient 28 point, nine rebound, five assist and one turnover night.

On a tight eight-man rotation, Raptors leaders Pascal Siakam and Fred Van Vleet logged 40 and 38 minutes a piece, scoring a combined 46 points. With lower usage players OG Anunoby and DeAndre’ Bembry playing alongside them, they have an easy path to high scoring nights.

The Obvious:  The Knicks have fully become a Tom Thibodeau team, posting the lowest defensive rating for February (106.4 points per 100 possessions, tied with Utah) and the second slowest paced games (96.7 possessions per 48 minutes). The result has been a 6-4 month, improving to 15-16 overall and seventh place in the Eastern Conference. This limits opportunities for fantasy goodness for both teams involved beyond Julius Randle, who got 25 points and 14 rebounds in 39 minutes.

For the Wolves, Karl-Anthony Towns also had a strong game, scoring 27 points, grabbing 15 rebounds and dishing out four assists in only 31 minutes.

Fantasy Watch:  With Derrick Rose now firmly in Thibodeau’s rotation, rookie sensation Immnauel Quickley played only nine minutes for the Knicks.  That’s a bit sad to see as the rookie had been a solid producer for the Knicks off the bench, closing games with his slashing and shot making.

The Obvious: When teams allow Trae Young to roam free with the basketball, he can carry the Hawks to victory.  Unlike other teams, the Nuggets didn’t double-team the Hawks playmaker at all, and Young made them pay over and over again, scoring 35 points and dishing 15 assists on a 10-19 shooting night.

Nikola Jokic had a rare off night, shooting only 5-15 while Jamal Murray hit a hot run late in the game to get to 30 points, keeping the Nuggets somewhat in range and keeping the starters on the floor, for the most part.

Fantasy Watch:  Michael Porter, Jr. is an incredible talent and fantasy producer, but he does bear the wrath of coach Michael Malone and often pays the price with minutes when Malone doesn’t feel his point is getting across to both Porter and the team.  Malone raged against the team defense most of the night, and Porter and fellow start Will Barton saw fewer minutes because of it.  Facundo Campazzo and Monte Morris got the benefit of those minutes, but can’t be counted on as consistent in case Malone isn’t yanking Porter/Barton.

The Obvious:  James Harden and Kyrie Irving have sorted out their respective roles and the result is that you can count on Harden for his usual flirtation with a triple-double and still get his shots, evident in his 37 point, 11 rebound, seven assist night on 13-25 shooting. Kyrie took 26 shots himself, scoring 28 and pitching in eight assists as well. When Kevin Durant returns, the shots should divide into three, but Harden’s role as primary facilitator should be firm for the long term.

For the Clippers, Kawhi Leonard and Paul George were both back in the mix for the Clippers, meaning the fantasy relevance of Lou Williams, Nicolas Batum, and Marcus Morris went back to reserve level.  Kawhi and George led the team with 19 shots each, and only Williams got double digits beyond those two.

Fantasy Watch: The Nets were on a super tight rotation, with only seven players getting double digit minutes.  Bruce Brown’s emergence has diluted the impact of Joe Harris overall, spreading the non Big-Three goodness out more evenly between Brown, Harris, and Jeff Green.

The Obvious: Two of the top-paced teams over the month of February did not disappoint with their 243 point total. The usual suspects for the Bucks, Giannis Antetokounmpo and Khris Middleton, combined for a whopping 70 points, 26 rebounds and 10 assists, while Middleton added four steals and two blocks to his nightly output.

De’Aaron Fox was stifled by the Bucks solid defense, shooting only 5-17, although he did get 10 assists amidst the tough shooting night. Tyrese Haliburton continues to show his predicted high rookie floor, with an ultra-efficient 10-16 shooting night and a 23 point, five rebound, eight assist contribution.

Fantasy Watch:  The Kings continue to struggle defensively, sixth worst overall this month and the Bucks looked on the verge of blowing this out on multiple occasions.  That’s always a risk if the Kings can’t score to keep up with the points their bad defense is giving away.

Richaun Holmes was back but limited to 21 minutes and Marvin Bagley’s production tumbled a bit because of it.  Meanwhile, with usual starter Harrison Barnes on the sidelines, DaQuan Jeffries stepped into the Barnes minutes and played a team high 39 minutes, netting 18 points and six rebounds.