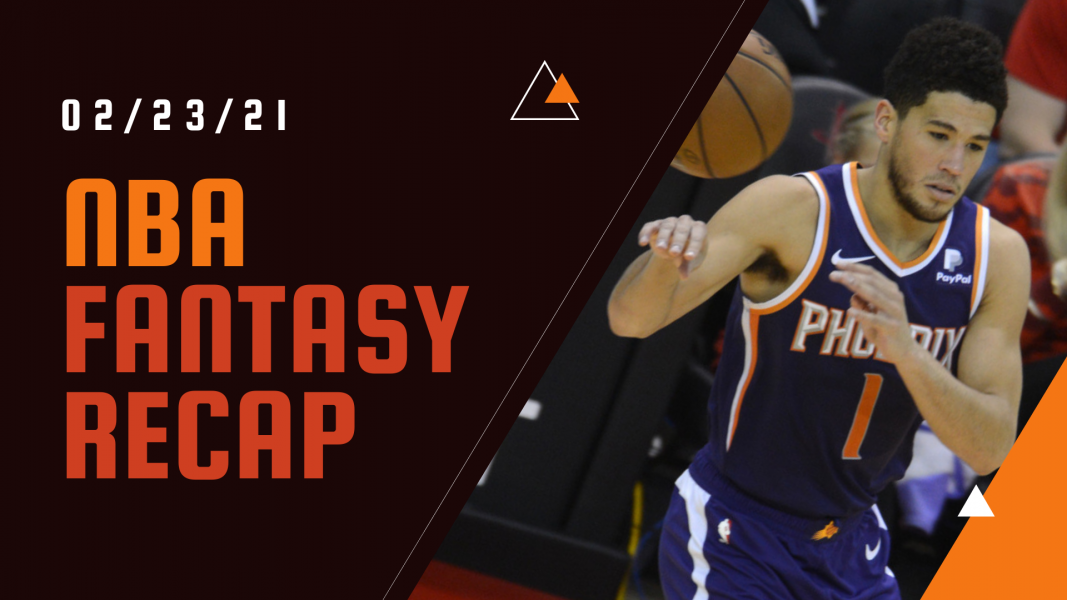 HOUSTON, TX - DECEMBER 07: Phoenix Sun guard Devin Booker looks for an open man during game against the Houston Rockets on December 7, 2019 at the Toyota Center in Houston, TX. (Photo by John Rivera/Icon Sportswire)

The Obvious: The Rockets are short handed and the Bulls destroyed them with a 46-26 third quarter that shortened the nights of the two main Rockets fantasy targets, John Wall (26 minutes) and Eric Gordon (28 minutes). That meant David Nwaba (22 points) got to get some additional usage in and he made the most of it.

With PJ Tucker manning the center position for Houson, Wendell Carter, Jr. got whatever he wanted inside and scored 18 points and grabbed 13 rebounds. The backcourt of Zach Lavine and Coby White (who left the game with a head/neck injury but came back) combined for a 17-30 shooting night. White also pulled down 10 rebounds and Lavine tossed in five, with six assists as well.

Fantasy Watch: The Rockets are releasing Demarcus Cousins just a couple of weeks after they guaranteed his contract for the rest of the year. Until Christian Wood comes back for Houston, other centers could have the same success as Carter.

The Obvious: The Mavs led this game throughout, and Luka Doncic didn’t have to really break a sweat on his way to a 21 points, seven rebound, five assist, ho-hum offering. His backcourt mates, Tim Hardaway, Jr. and Jalen Brunson found the sixth-worst February defense of the Grizzlies easy to crack, shooting 13-25, with 9-14 of those coming on threes.

The Grizzlies won the fourth quarter to make the score somewhat respectable, with Ja Morant getting his 20+ shots to land on 22 points and nine assists. Jonas Valanciunas struggled getting the ball to fall, shooting a miserable 5-18 from the field despite the smaller Dallas frontline minus Kristaps Porzingis.

Dallas’ Maxi Kleber left the game with an injury and the Mavericks are rumored to be shopping Porzingis, meaning Dwight Powell and Willie Cauley-Stein could see more consistent minutes moving forward if those if Kleber and Porzingis are not available.Both are questionable for Tuesday’s games.

The Obvious: With Goran Dragic not with the team due to an ankle injury, Kendrick Nunn and Duncan Robinson led the Heat backcourt with 42 points on 15-33 shooting and (9) three-pointers between the pair. Nunn also kicked in nine assists and proves to be a solid performer when Dragic is not available.

The Thunder were missing center Al Horford and struggled with offensive efficiency throughout, despite Shae Gilgeous-Alexander’s (SGA) 10-15, 27 point night. The Thunder lacked a second option beyond SGA, with Loguentz Dort underlining that with a 3-15 shooting night, the only other Thunder that took more than nine shots.

Fantasy Watch: Dragic is expected to return to the lineup when the Heat return to Miami Wednesday night, dropping the expectation of Nunn and Tyler Herro, who also missed this game with a hip injury. Horford rested Monday and is expected to play against the Spurs Wednesday if the Spurs have the minimum (8) players available to play due to COVID restrictions.

The Obvious: Phoenix got on top of Portland early and cruised behind Devin Booker’s hyper-efficient 12-17 shooting, 34 point night. Booker did his damage in only 29 minutes.

The Suns tried to limit Damian Lillard and force someone else to make shots to beat them. Lillard did shoot 9-17 in his 28 minutes, scoring 24 points, but the remainder of the team shot 28-67 (41 percent) and Gary Trent in particular struggled, shooting 4-18.

Fantasy Watch: Portland has struggled defensively in their 12 February games, yielding 117.2 points per 100 possessions, seventh worst for the month.

The Obvious: The Jazz used a Jordan Clarkson/Georges Niang shift to not just overtake the Hornets during the second half, but blow them out. Niang made seven of seven shots, all threes and Clarkson did his bench bomber routine, scoring 20 himself.

The Hornets offered a balanced scoring attack, with Gordan Hayward, LaMelo Ball and Malik Monk all scoring 20 or more points.

Fantasy Watch: Gordon Hayward aggravated a previous hand injury and left late in the game and the team is concerned about his short-term availability. With Devonte Graham already out, this would open up more shots for Terry Rozier and Monk.

The Obvious: Surprise! The Wizards are good again, knocking off the Lakers in LA and winning their fifth straight game behind Russell Westbrook and Bradley Beal. The pair combined for a massive 65 points on 25-49 shooting, dominating the game and pulling off the upset. Westbrook flirted with a triple-double, grabbing 14 boards and dishing nine assists.

LeBron James also nearly messed around with a triple-double, scoring 31 points, getting nine rebounds, and dropping 13 assists in the wild, high-scoring affair. Kyle Kuzma got the start while Anthony Davis remained out and scored 14 points with 11 rebounds in his 36 minute appearance. Off the bench, as usual, Montrezl Harrell poured in 26 points and gathered nine rebounds.

Fantasy Watch: With Davis out, Kuzma and Harrell delivered here, but Harrell has given way to Marc Gasol more often than when Davis is in. Gasol played 27 minutes to Harrell’s 23 in this one, including all five minutes of overtime. Alex Caruso also played the pivotal minutes of overtime instead of starter Wesley Matthews. For the Wizards, Mo Wagner continues to start, but Robin Lopez played twice as many minutes (30-15) and it was Davis Bertans who played the overtime session instead of starter Garrison Matthews.