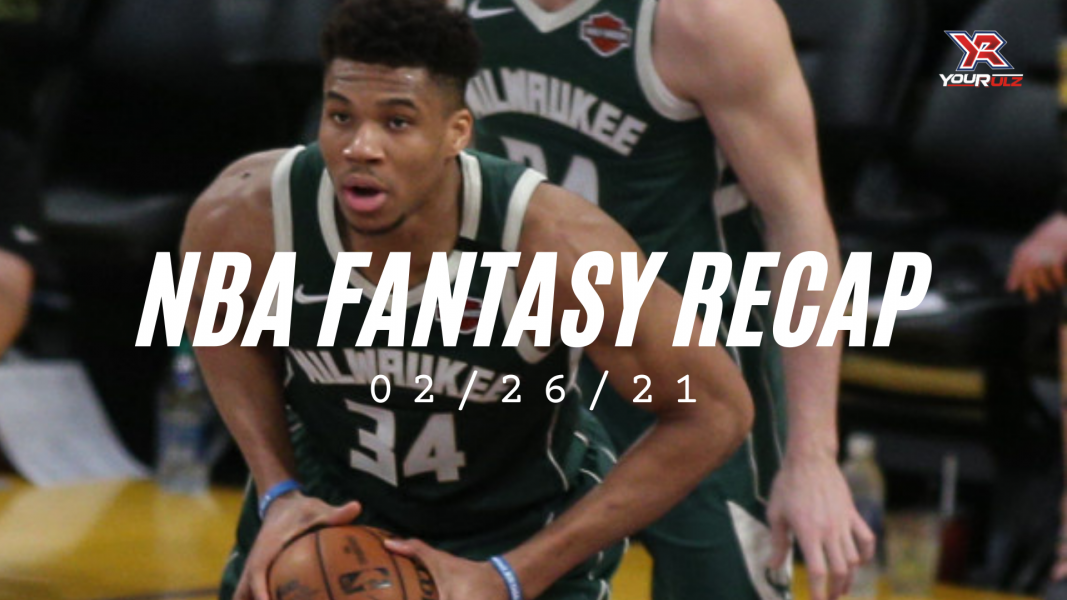 The Obvious: Two of the most efficient offenses came together and it was Giannis Antetokounmpo’s Bucks emerging the victor, led by the Greek Freak’s 36 points, 14 rebounds, five assists and four blocks.

The Clippers played Kawhi Leonard and Paul George 37+ minutes each, and while Leonard had a strong game (10-21, 25 points, nine rebounds, two steals, no turnovers), Paul George struggled with efficiency, making only seven of his 21 shots including only two of 10 from three-point range. Lou Williams had strong minutes off the bench, scoring 14 and dishing four assists in 24½ minutes.

Fantasy Watch:  With all the Clippers back, the impact of fringe minutes players like Lou Williams and Marcus Morris wane. Nicolas Batum, who put up fantasy relevant numbers with Leonard and George sitting, went back to playing starter’s minutes (30), but only rolling up an eight-point, six rebound, two assist night.  Serge Ibaka seems to be playing slightly more than a 50-50 split with Ivica Zubac these days.

Jrue Holiday returned for the Bucks, albeit on a minutes limit.  However, his return means that the extra stats and minutes from DJ Augustin and Pat Connaughton are cut down and extra usage for Donte DiVincenzo is cut down as well.

The Obvious: Jayson Tatum is a scoring machine and poured in 31 points to go with eight rebounds, three assists, and three steals in 38+ minutes.  However, it was the hyper efficiency of Daniel Theis (8-11, 20 points, nine rebounds) and the strong PG play of Kemba Walker (21 points, eight assists) that lifted the C’s over the Wizards without Jaylen Brown’s participation.

Once again, despite everyone knowing who needs to shoot for the Wizards to win, Bradley Beal (29 shots) and Russell Westbrook (22 shots) managed to shoot a combined 26-51 to keep the Wizards in position to come out on top.  Beal had 46 points in his 39 minutes and Westbrook posted 24 points and 11 rebounds.

Fantasy Watch:  After Beal and Westbrook, the Wizards third cog will vary from game to game. One night it’s Rui Hachimura, another Garrison Matthews and, in this game, it was Davis Bertans, who scored 20 w/five three-pointers in 26 minutes.

The Celtics, without Brown and Marcus Smart, started Jevonte Green, but his usage didn’t rise with the minutes, shooting only five shots. Only Payton Pritchard (9) attempted more than five from the non-Kemba guards.

The Obvious: Julius Randle continues to kill it for the Big Apple, landing 10 of 18 shots and turning in a 25 point, eight rebound, six assist effort with just a single turnover. Five Knicks scored in double digits as the team shot 51 percent for the game.

The Pistons were searching for answers the whole game.  Jerami Grant led the team with 19 shots in 30 minutes, scoring 21 with his eight rebounds, but nobody else posted a fantasy worthy effort for Detroit.

Fantasy Watch:  The Knicks, as we have written about in this space, have gone full Coach Thibs, now residing as the third best defense overall behind the Jazz and the Lakers. Nerlens Noel has won the coach’s trust, especially with Mitchell Robinson out, playing 39 minutes and posting a double-double with 13 points and 11 rebounds. Noel also had three steals and three blocks. Derrick Rose is turning back the clock to his other two stints with Thibodeau, playing 32 minutes here on a back-to-back after playing 37 minutes Saturday night.

The Obvious: Kendrick Nunn got hot in the first half and then hit a key three to put the game away. Nunn led with 24 points and seven assists with Jimmy Butler sidelined. Bam Adebayo post his usual and efficient 16 points, 13 rebound, five assist night.

Trae Young was frustrated by the Heat’s double-teams and zone defense designed to corral him, and he shot a forced 3-14 while coming close to a triple double (15 points, eight rebounds, nine assists). John Collins was hard to handle for the Heat, and Collins kept the game close for the Hawks, shooting 13-21 for 34 points and 10 rebounds while Clint Capela added 20 and 14.  Kevin Huerter struggled to shoot (5-13) but had six steals in the effort.

Fantasy Watch: The Heat give up the most three-point attempts per game (41) but are 13th in the league at defending the line, meaning it’s tough to score inside with Bam Adebayo there, and the Heat’s hustling defense always manages to get a hand up when the inevitable long range shot is settled for. The Hawks shot 23% on three-pointers Sunday.

The Obvious:  Painful game for the Rockets, who have lost 11 in a row. The shooting was brutal: John Wall shot 4-16, Eric Gordon 1-10, Daniel House 2-11, and Ben McLemore 2-10.  The Rockets shot 27.7% for the game, incredible considering the amount of garbage time that was available here.

The Grizzlies starters didn’t have to play much, as Ja Morant (26 six points, seven rebounds) was the one of two players with 23+ minutes (Desmond Bane played 27). Brandon Clarke, who is used to producing strong numbers in sub-24 minutes, rebounded 12 of those errant Rockets’ shots and scored 16 points in 20 minutes.

Fantasy Watch: The Rockets slide could lead to more lopsided games like this unless they get Christian Wood and Victor Oladipo back. While you can’t predict blowouts, but they are not ideal for playing your stars as anybody can score against a bad team (aka you don’t need your stars) and the minutes could be limited.

The Obvious:  LeBron James needed only to play 24 minutes as the Lakers rolled. James led the way with 19 points in those 24 minutes, and filled the stat sheet in the half game anyway (six rebounds, four assists, two steals, two blocks). Dennis Schröder led the Lakers in minutes with 25.

The Warriors didn’t play more than that, either, with Stephen Curry (16 points, seven assists) leading with 26 minutes, along with Kelly Oubre (14 points, five rebounds).

Fantasy Watch:  Teams do get up to play the Warriors, as was mentioned by coach Steve Kerr, Curry and Draymond Green. It’s not like the Warriors are pushovers, either, as they are fourth in defensive rating for the year and for February.

The Obvious: Devin Booker was bonkers with 15-26 shooting and 43 points overall. Deandre Ayton added a 9-11 performance for 22 points to go with his 10 rebounds and Chris Paul posted an 18 point, six rebound and 15 assist night as the Phoenix big three easily handled the limping (7-28) Timberwolves.

Rookie Anthony Edwards scored 24 points for Minnesota, and Karl-Anthony Towns worked through a 21 point, 10 rebound night in his 33 minutes.

Fantasy Watch: With D’Angelo Russell and Malik Beasley out for Minnesota, the rookie Edwards posted 35 minutes, really the only Timberwolves player to take advantage of the massive amount of usage that Russell/Beasley assume when healthy.

The Obvious: PJ Washington went off against the soft defense of Sacramento, scoring an amazing 42 points on 15-23 shooting. Washington added nine rebounds, two steals and two blocks in the process. Without Gordon Hayward, the Hornets guards picked up the slack as well: Lamelo Ball had 24 points and 12 assists, while Malik Monk chipped in 21 points, five rebounds, and four assists. Miles Bridges was also strong (5-7, 13 points, nine rebounds).

The Kings were led by Buddy Hield, who shot 10-17, including an 8-15 night from three-point range, scoring 30 in 38 minutes. De’Aaron Fox played 40+ minutes and posted a solid 20 point, 14 rebound game. Harrison Barnes and Marvin Bagley combined for 52 points and 16 rebounds.

Fantasy Watch: The Kings shot 54% and lost, including blowing a double-digit lead in under two minutes at the end of the game. They are fantasy gold, a team terrible on defense but with a fantastic offense to avoid regular blowouts. Hield and Barnes took advantage of some of the stats vacated by rookie Tyrese Haliburton’s absence.