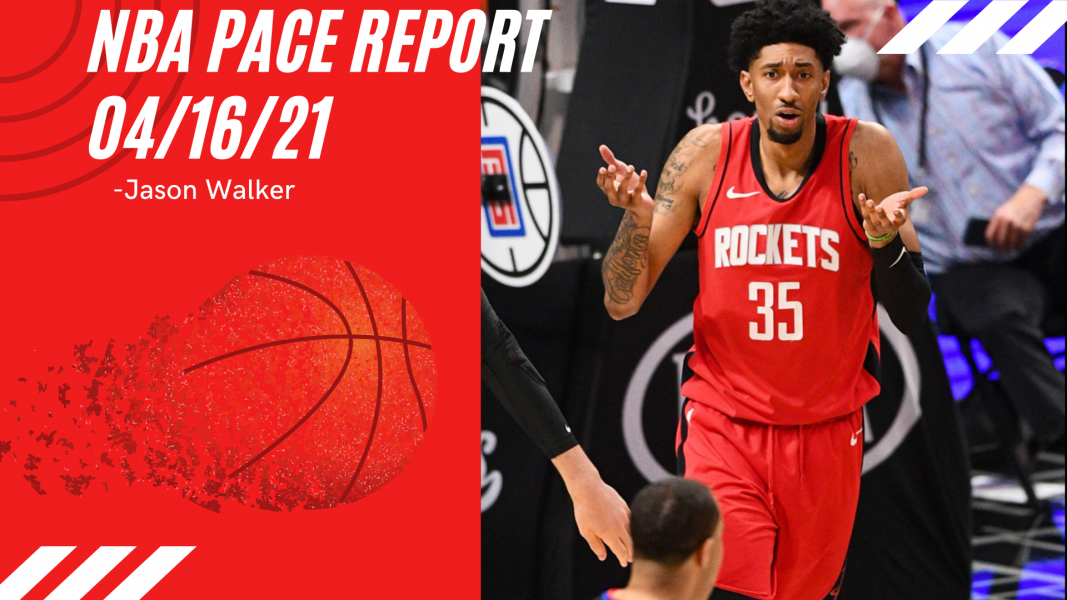 LOS ANGELES, CA - APRIL 09: Houston Rockets Center Christian Wood (35) reacts to a call during a NBA game between the Houston Rockets and the Los Angeles Clippers on April 9, 2021 at STAPLES Center in Los Angeles, CA. (Photo by Brian Rothmuller/Icon Sportswire)

Pace is an important part of fantasy basketball. The faster a team plays, the more possessions in a game, the more fantasy points and stats can be accumulated by the participants. Two players can be very similar, skills wise, but if one plays on a faster paced team, he can rack up more stats than the similarly talented player on a slower team.

YouRulz will take a look from time to time to check in on teams and their last (10) games, as provided by NBA.com/stats, to see which teams are faster or slower, why, and how that impacts certain players moving forward. We will also tag what that teams’ offensive rating (points scored per 100 possessions), and defensive rating (points allowed per 100 possessions) for further analysis.

The Kings are the gifts that keep on giving, defensively, and have continued to play at a top ten pace. However, the offense has receded in efficiency recently, dipping to a minus-seven net efficiency (offense-defense) and has resulted in a nine-game losing streak.  This is important when considering streaming players against the Kings as their offense has been good enough to keep the minutes flowing for the principal players, but a dip in efficiency and more losing could potentially mean more blowouts and less important minutes for Kings’ opponents.

The Timberwolves are playing faster, and the results are very fantasy friendly.  They are scoring more and giving up more.  Rookie Anthony Edwards and stalwart center Karl-Anthony Towns have been the biggest and most consistent beneficiaries for the Wolves.

The Pacers have the top spot in pace over the last 10 games, and it coincides with the playing time and fantasy scoring of Caris Levert.  Levert, who came to Indiana from Brookyln in the James Harden/Victor Oladipo deal, had major medical issues upon arrival in Indiana but has emerged, averaging over 35 fantasy points per game over his last 10 games, including two recent 50-burgers.

The Thunder have the worst offensive/defensive differentiation over the last 10 games, with an incredible –22.7 number.  What this means is the teams that are playing the Thunder don’t typically need their stars to pick up any slack, because everybody can score quickly on the Thunder, and games get out of control faster, making them a sketchy target.

The Bulls went all in at the trade deadline and brought in Orlando Magic center Nikola Vucevic. What has happened since then is the Bulls are scoring more per possession, but also giving up more per possession, resulting in a little bit of a losing streak.  Against the Hawks, the Bulls lost despite 50 points from Zach Lavine, and did this by giving Trae Young 42 points and nine assists. The Bulls are an interesting fantasy target moving forward, even despite the slower pace.

We noted last time in this space that the Hornets were showing signs of playing slower without dynamic rookie floor general and playmaker LaMelo Ball.  Now, the Hornets have moved all the way to #3 on our list, further signifying this change in pace.

The Boston Celtics have Marcus Smart back full-time and the clamps are on, both in pace of play and defense.  Boston’s 106.5 points per 100 possessions mark is fifth in the league over this scope of games.

The Denver Nuggets acquired Aaron Gordon from the Magic at the deadline and the initial results are a slower team, but are also providing the fifth best offense and middle-of-the-road defensive efficiency over the 10 game span.

Finally, the Orlando Magic, now without Even Fournier (Boston), Vucevic (Chicago), and Gordon (Denver), have seen their pace increase as well as how many points they will give up per possession.  Like the Thunder, the Magic offense and ease of scoring against them make them a sketchy target for star opponents.