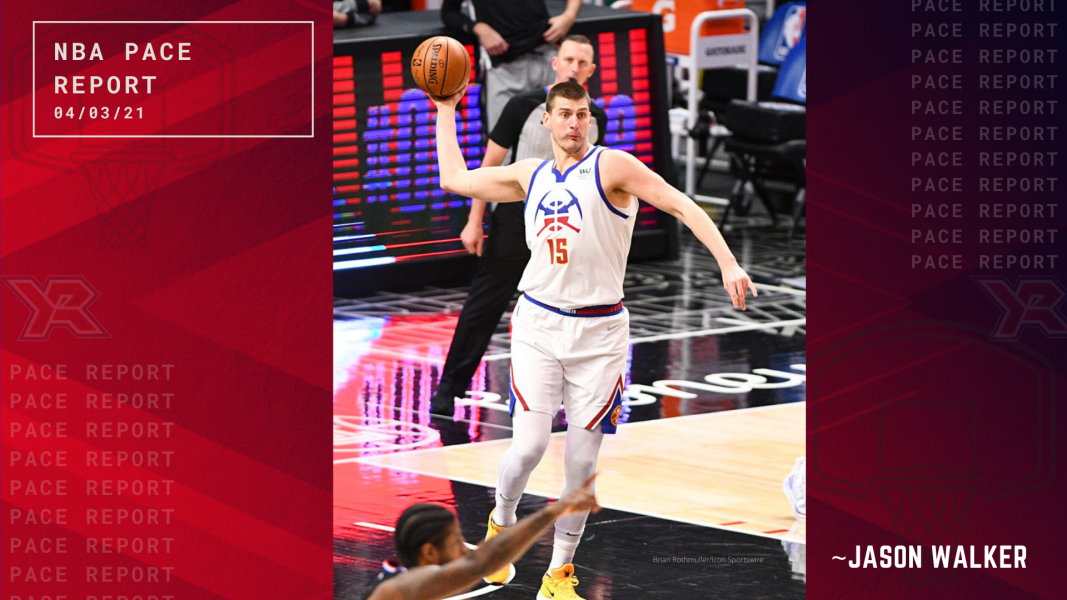 LOS ANGELES, CA - APRIL 01: Denver Nuggets Forward Nikola Jokic (15) makes a pass during a NBA game between the Denver Nuggets and the Los Angeles Clippers on April 1, 2021 at STAPLES Center in Los Angeles, CA. The game was played without fans due to the COVID-19 pandemic. (Photo by Brian Rothmuller/Icon Sportswire)

Pace is an important part of fantasy basketball.  The faster a team plays and the more possessions in a game, the more fantasy points and stats can be accumulated by the participants.  Two players can be very similar, skills-wise, but if one plays on a faster paced team, he can rack up more stats than the similarly talented player on a slower team.

YouRulz will take a look from time to time to check in on teams and their last (10) games, as provided by NBA.com/stats, to see which teams are faster or slower, why, and how that impacts certain players moving forward.  We will also tag what that teams’ offensive rating (points scored per 100 possessions), and defensive rating (points allowed per 100 possessions) for further analysis.

Four of the worst seven defenses over this span are on this list (Thunder, Timberwolves, Warriors, Kings), making them prime targets for single-game streaming for opponents, or week-long if two of these teams are on the docket.

The Wizards, who feature extreme concentration in terms of fantasy goodness (relying very heavily on Bradley Beal and Russell Westbrook), are now playing at the fastest pace in the NBA.   It’s not a wonder how Westbrook gets to his nightly triple-double with the team playing so, so fast.

The Lakers, for the season, are the 17th ranked team in terms of pace.  What we may be seeing here is the impact of LeBron James being out of the lineup.  With LBJ in, the game has to go through him (as it should), but it does not lend itself to quick possessions.  With LeBron out, the team is pacing up more to try and take advantage of an unset opponent defense and get easier shots since they haven’t had LeBron around to make his usual impact.

It’s weird to see the Utah Jazz on any fastest team list.  For years, they have dredged the bottom of the pace reports.  However, that trend has changed over the last two months, as the Jazz were 15th in pace in February and 6th in the month of March.  When you are second in offensive efficiency, however, I guess you want to get the buckets as quickly as possible.  The faster pace definitely helps Donovan Mitchell and Rudy Gobert rack up the stats.

Five of the top ten offensive ratings teams are here in the slowest teams:  Clippers, Nuggets, Hawks, Mavericks, and Suns.

The Atlanta Hawks are 13-5 under interim coach Nate McMillan.  Coinciding with McMillan’s taking over of the team is the slower pace of the (prior to now) faster paced Hawks.  The Hawks just wrapped an eight-game west coast road trip, playing some of the better teams in the league and dealing with injuries along the way, but McMillan wasn’t known as a fast-paced coach in his prior stops, and it remains to be seen if this is a trend that will continue when the Hawks are at home more often.  If it is, and given the Hawks getting back to health, this could mean lower counting stats for the wings like Kevin Huerter and Bogdon Bogdanovic.  Also, it means that for Trae Young to maintain his lofty stat levels, he will have to be more efficient to make up for the fewer possessions.

The Knicks have fully assumed head coach Tom Thibideau’s MO, a knock down defense and slow pace. The Knicks were fourth in defensive efficiency over these ten games, and are also fourth for the season, making them a terrible target for opponents fantasy and for streaming players.

The Charlotte Hornets have been a fast-paced team lately, evidenced by their fourth place finish in February in pace, but that changed when rookie LaMelo Ball got hurt and was rendered out for the season.  Without Ball, the Hornets are the fourth slowest team in pace and now have also lost Gordon Hayward to injury for the next month.  We may be seeing them on this list for the rest of the season.