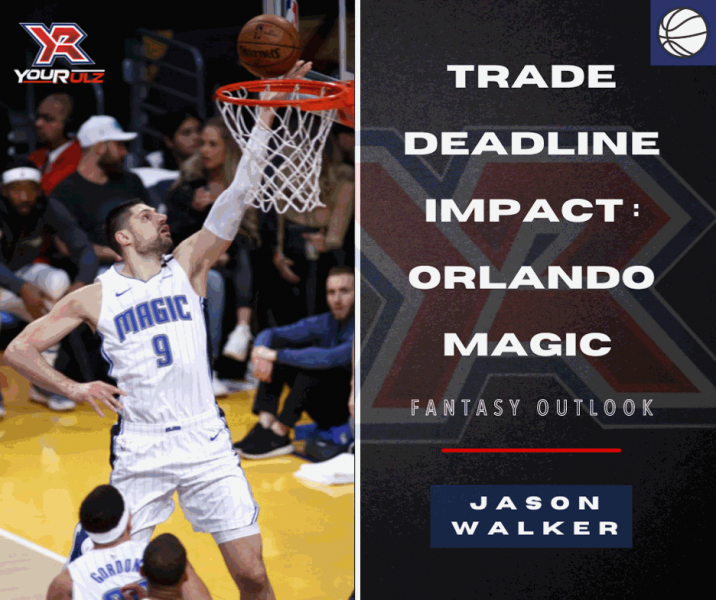 Thursday was the NBA Trade Deadline and there was more movement than had been anticipated, leaving much in the way of fantasy impact to discuss.

Let’s look at one of the teams that made the biggest moves and created the most impact across the league.  The Orlando Magic took apart their team that seemed to have peaked at the lower rung of the Eastern Conference playoff race, which isn’t great. Nikola Vucevic, Aaron Gordon, and Even Fournier were all sent packing to separate teams, bringing in new talent to replace them and creating more opportunity for those left behind.

As for the Magic, the trade of Vucevic, Fournier, and Gordon removed the three highest possession users on the team, creating a massive void.  Markelle Fultz, the team’s highest usage player for 2020-21, is out for the season.  Cole Anthony, who was fifth in this category, is also hurt for a few more game.

Terrence Ross looks to be the biggest beneficiary of all this vacuum. Ross, a volume shooter/scorer, already uses 23% of possessions, good for sixth on the team.  Also, in 136 minutes without all those players on the floor this season, Ross has used a massive 39% of possessions, and has produced 1.37 fantasy points per minute, a huge number.

Also, is it Mo Bamba season?  Bamba, at least in the interim while Wendall Carter, Jr (acquired in the Vucevic deal from Chicago) makes his way to Orlando, has an opportunity to finally get some minutes.  He’s been a good fantasy scorer in the 101 minutes he has played without all those other guys on the court, scoring 1.07 fantasy points per minute.  Bamba can accumulate rebounds and blocks at a solid rate when getting extended minutes, and he draws the tandem of Jusef Nurkic/Enes Kanter of Portland Friday to show what he can do.

Looking at the players sent out and their impact, the safest to reproduce what he was doing in Orlando should be Vucevic, who will slide into Carter’s center position for the Bulls and will assume the role of replacing the highest defensive rebounding slot on the team (Carter led with grabbing 22% of available rebounds when on the floor).  The Bulls are the third best in the league in defensive rebounding, so Vucevic will have plenty of opportunity to grab some of the rebounds that have been left available after the trade.  Offensively, he now plays with Zach Lavine, who is a 31% usage player which, when compared to the 29% Fultz was using with Vucevic, shouldn’t mean too big of a change in terms of production.  Also, any gap in usage should be countered by the fact that the Bulls play faster than the Magic, with Chicago being #8 in Pace and the Magic #19.

Evan Fournier heads to Boston and will seemingly step into the role that Gordon Hayward had last season for the Celtics.  In terms of impact, Fournier finds himself around many solid usage players, with Jayson Tatum and Jayson Brown entrenched as the top two options, and Kemba Walker and Marcus Smart also above the 20% mark.  When Hayward was present last season, it was still Tatum/Brown/Walker leading the way, but with lower overall usage.  Overall, it looks like the addition of Fournier (while being important for Boston as a team trying to win) will negatively affect all fantasy outputs for the players involved.

Over in Denver, Aaron Gordon arrives, and he now slides into a roster that didn’t really open a spot for him in the deal that got him there.  Gary Harris and RJ Hampton are both guards, so the Nuggets will need to create some space to get Gordon in the lineup.  Assuming Gordon is starting, the players looking over their shoulders should be Michael Porter, Jr and Paul Millsap.  Porter is electric and scores, but has shown some inconsistency and basketball immaturity on the court, often drawing the ire of Coach Michael Malone.  Some of this is on the defense end, so we could very well see Gordon starting in place of Porter, with Porter being used as an offensive lift for the second unit.  Overall, a crowded front court (which also includes solid veteran JaMychal Green) gets more crowded, and gives a coach who likes to use minutes to get what he is wanting on the court more options to tinker throughout the game.  Bottom line is, like the Celtics, good acquisition for the team, but likely a statistical bummer for everyone.