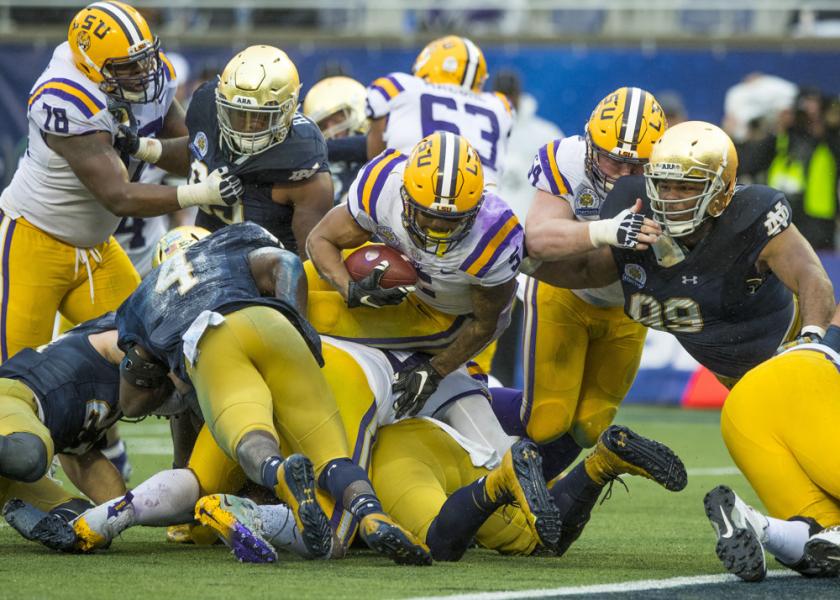 Barkley is without question the most talented and sought-after rookie RB of 2018, and it’s not even a stretch to call him the best player of the entire 2018 draft.  He also landed in a very favorable situation for Fantasy Football.  The Giants already have a dynamic passing offense featuring Odell Beckham Jr. as well as talented 2nd year players Sterling Shepherd and Evan Engram.  With no notable running backs other than Barkley, he is guaranteed to get volume, and that can be more important than talent when it comes to fantasy scoring potential.  Barkley excelled against Big 10 defenses throughout his college career, and his talent is so immense that he shouldn’t be caught off guard by NFL level defensive schemes.  While the Giants don’t have the easiest schedule this year, Eli Manning and the passing game should be able to impede defenses from keying on him, opening up more room to run.

Hailing from LSU, where he finally got his time to shine after the departure of Leonard Fournette, Guice proved that he is the real deal.  He’s got flashy, big-play potential, and should make a significant and immediate impact on the Redskins anemic running game.  Fournette was regarded as one of the best college RB’s of the past decade, but Guice topped him by inking his name in the LSU record books by setting team records for YPC (6.53), most yards in a game (285), and longest rushing TD (96 yards).  These records all speak to his explosiveness; he’s capable of taking it the distance every time he touches the ball.  Guice is your classic SEC RB in that he’s used to playing against big, physical defenses and wearing them down.  He had some character concerns which supposedly led to his draft day fall, but it’s doubtful that those will impact his ability on the field.  Guice should command plenty of volume as the Redskins are desperate for a between-the-tackles RB to compliment passing-down specialist Chris Thompson.  While Thompson may eat into some of his workload, there’s more than enough touchdown potential to make him a fantasy stud.

Penny had an extremely impressive final season at SDSU.  He accumulated 2,248 yards and 23 TD’s to position himself at #5 in NCAA history for most rushing yards in a single season.  Despite the massive amount of production he had in that final season, he only carried the ball 613 times in his entire college career, so he doesn’t have the wear and tear or injury history that several of his peers have coming out of college.  He’s also finds himself in a very favorable situation in Seattle, with a good supporting cast around him.  While Seattle’s offensive line has been shaky at best in recent years, they are actively trying to improve their run game.  They picked up Guard D.J. Fluker in free agency, who should offer an immediate boost to their run blocking, as well as drafting Will Dissly, the best blocking TE in the draft this year.  Penny should easily beat out the likes of Chris Carson and JD McKissic for the starting job, and has an excellent chance at serving as a 3-down back.  Russell Wilson is a dynamic QB and the focal point of the Seahawks offense, but has desperately needed a runner to take some of the pressure off of him since Marshawn Lynch left.  While there’s no mega-talent like Odell Beckham to take the lid off the defense, the Seahawks have a respectable group of wideouts and a QB who can also punish defenses on the ground.  Seattle was excited enough about Penny to take him in the first round of the draft – it’s reasonable to expect him to become one of the focal points of the offense.

Johnson is perhaps my favorite RB in this draft.  He may not be the most talented, but I feel he has an extremely high ceiling with the Lions.  Johnson, like Guice, is another SEC RB (SEC Offensive Player of the Year) that’s used to dealing with (and excelling against) big physical defenses.  The Lions have one of the better offensive lines, and he’s a downhill runner that should do well with his opportunities.  It’s fitting that Johnson ended up in Detroit, since he’s idolized Barry Sanders since childhood.  However, the immediate backfield situation in Detroit isn’t ideal; there are other RB’s vying for carries.  Free agent LeGarrette Blount could end up vulturing TD’s as a short yardage specialist, and Theo Riddick is expected to get plenty of opportunities on passing downs.  Despite these challenges, I believe Johnson is going to end up being the feature back in Detroit.  Much like Rashad Penny, he wasn’t driven into the ground in college (only 517 carries), but he did deal with his share of injuries (primarily shoulder and hamstring), so some may consider him more prone to injury than other backs in this year’s class.  However, he’s a tough, patient runner with tremendous breakaway speed, something Matt Stafford and the rest of the offense has been missing for years.  I expect great things from him.

The Bucs think that USC product Ronald Jones II is talented enough to be a 3-down back.  Tampa’s backfield situation is neither deep nor talented, so it’s not a crazy prediction.  Mediocre Peyton Barber may be getting the first team reps right now, but it’s doubtful that the Bucs are going to trust Barber to lead their backfield.  Jones is explosive, a legitimate star from a big-name college.  If he looks anything like he did in his final season, he should get a ton of carries.  Even though he isn’t the best pass catcher or blocker (only 32 catches in 40 games), Jones was second in draft-eligible RB’s in forced missed tackles (58), so he’s a legitimate big play threat the Bucs desperately need.  One danger to Jones’ value is Tampa’s tendency to constantly play from behind; he may be pulled on passing downs.  Volume is volume, though.  Jones is going to get fed, every game - at least until the Bucs start trailing.

With the departure of C.J. Andersen, Freeman finds himself in a great situation in Denver.  All he has to do is beat out the pedestrian Devontae Booker, and given his athleticism, that shouldn’t be too difficult.  He’s a very strong, fast runner that can get to open field very quickly, and is also a solid pass blocker, making him a more tantalizing option for the Broncos to use on all 3 downs.  What drops Freeman down the list is the uncertainly in his use to start the season.  His ceiling is incredibly high when you consider the fact that he could be the focal point of the Broncos offense, a team that prefers to win with running and defense.  There are some additional concerns about a major knee injury he had at Oregon, and the immense number of carries over his four years (947 carries).  While that proves he can be a workhorse, it raises red flags about his potential for breaking down late in the season.

Michel is one of the most talented RB’s in this year’s class, but he didn’t necessarily land in an optimal situation.  He has a great offense surrounding him, but it’s a pass-first offense that prefers a committee approach.  The good news is that Michel is an excellent pass-catching back and could quickly find a big role in New England’s high-powered offense as a replacement for Dion Lewis.  A concern with Michel is that he had fumbling issues in college, and Bill Belichick has no patience for players that cough up the ball.  One ball on the ground could easily land him in Belichick’s doghouse, while James White, Rex Burkhead, Jeremy Hill and others carry the load.  However, if he can earn the trust of Brady and Belichick, Michel could end up being a major contributor down the stretch, especially in PPR leagues.  Michel performed strongly on the biggest stages his final year at Georgia, averaging 7 YPC vs Alabama in the National Championship, and 6.4 YPC vs Auburn in the SEC Championship.  The Patriots certainly liked him enough to grab him in the first round, a lofty position they normally do not use for running backs.  Grab him and pray he holds on to the ball.

The 2nd half of the Georgia duo, Chubb is a big bruiser of a RB that can tote the rock on all 3 downs.  He has outstanding vision and can wear down an opposing defense throughout the game.  He split time with Michel at Georgia (as well as Todd Gurley in his early years), but he stayed 4 years and racked up a lot of mileage on body.  He had a nasty ACL injury that he bounced back from, but durability remains a concern.  Chubb is extremely talented, but will most likely start the season backing up Carlos Hyde and Duke Johnson, and unless you are in a dynasty league he isn’t anything more than a handcuff or late round stash.

Hines landed in a unique situation in Indianapolis.  Drafted by the Colts in the 4th round out of NC State, he doesn’t have a lot of flashy stuff on his college resume, but is very, very fast and has drawn comparisons to Alvin Kamara.  He is definitely worth a late round flier, even if he isn’t going to be the ground and pound RB that gets the ball on early downs.  He had the fastest 40 yard dash time at the combine this year (4.38), and is a great receiver that could easily break away for big plays.  Hines also excels on special teams, and could offer some additional value as a punt and kick returner.  My biggest concern is whether or not the Colts offense will be any good this year.  If Andrew Luck comes back and looks like his old self, the Colts could be a dynamic high-scoring offense with plenty of opportunities to get Hines into space.  If not, he could be stuck behind Marlon Mack on a team scoring 13 points a game.