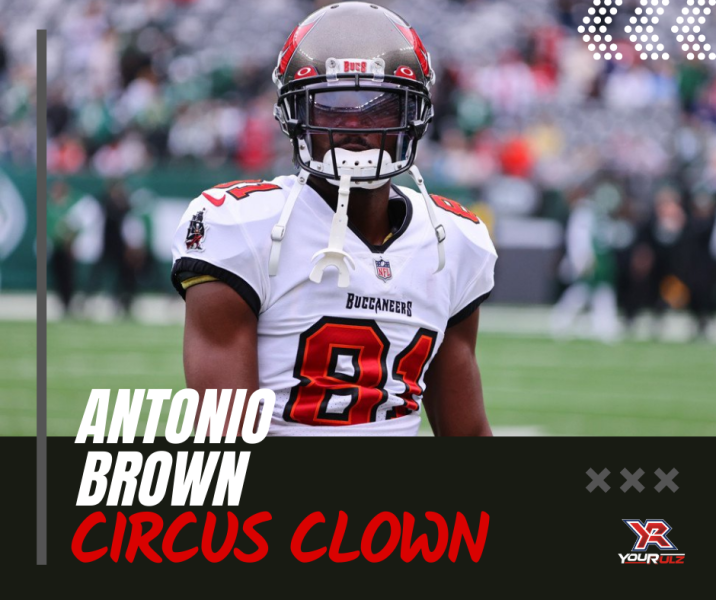 It's only the second day into the New Year and If Antonio Brown’s performance this Sunday is any indication of what we can expect from 2022, this year is going to be batcrap crazy. We’re just weeks away from the playoffs and Brown throws a temper tantrum and basically quits on the Tampa Bay Buccaneers mid 3rd quarter while they were trailing the New York Jets. The former All-Pro wide receiver ripped off his jersey and pads and sprinted into the locker room in a truly wild scene that left everyone watching the game confused.

After the game, Buccaneers coach Bruce Arians didn’t waste any time announcing what everyone who witnessed the spectacle already knew: Antonio Brown was done with the Buccaneers organization. Hence, if Sundays “cry for help” wasn't AB's resignation, Arians made it very clear from his perspective that he's fired.

We've just witnessed Antonio Brown’s last game as a professional football player and the Buccaneers season isn't over; they are playoff bound. Some would say coach Arians can't blame anyone but himself for coddling Brown and being so naive to think that a zebra can indeed change its stripes. Arians knew who Antonio Brown was well before this incident, once dealing with a young AB as an assistant with the Pittsburgh Steelers.

One may question what happened to Brown’s bromance with Tom Brady, who put his reputation on the line to bring on this championship roller coaster ride in Tampa - and this is how he shows his appreciation. The rumor mill has it that AB was closing in on a million-dollar bonus when the Buccaneers took him out of the offense. However, even if this was the case the lengths Tom Brady went through to involve this guy in a winning situation and resurrect his career are unparalleled. Brown was suspended for eight games for violating the NFL’s personal conduct policy. He was also suspended for three games earlier this season because he submitted a fake coronavirus vaccination card.

In my opinion, this was the worst demonstration of appreciation I've ever seen in sports. Even with the possible bonus grievance, in any profession you can't be missing for weeks and expect your job to incorporate you back into the workflow as if you hadn't been unavailable. Some would say Brown was lucky to have such a high-paying job after his numerous distractions and discrepancies. The juvenile tantrum was embarrassing and warranted his dismissal.  His job description is professional football player, not circus clown. Now the world begs to differ. Look for AB to jump in the square circle with Jake Paul in a WWE-style boxing match before the year is up.

On another note, in one of my fantasy leagues I was on the fence in this year's draft on whether to pick up Odell Beckham or Antonio Brown. Still being intrigued by AB's determination and contributions during Tampa Bay's Super Bowl run last season, I went with my gut and drafted Beckham. I prayed on it - and won't GOD do it! How ‘bout I was right! Beckham is headed to the playoffs while Brown is headed back to making rap music. This is what I love about fantasy football. You don't always get it right, but when you do the feeling is exhilarating.