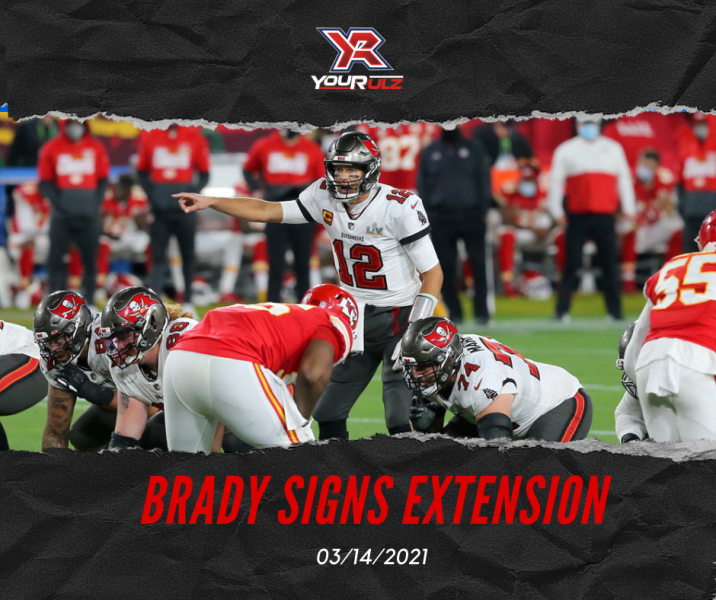 TAMPA, FL - FEBRUARY 07: Tom Brady (12) of the Buccaneers points out the defensive coverage during the Super Bowl LV game between the Kansas City Chiefs and the Tampa Bay Buccaneers on February 7, 2021 at Raymond James Stadium, in Tampa, FL. (Photo by Cliff Welch/Icon Sportswire)

Tom Brady put pen to paper on March 12th on a 4-year contract extension with the returning Super Bowl Champion Tampa Bay Buccaneers.  The deal is really just a 1-year extension with the remaining three years being voidable years.  While Brady is not allowed to play on those voidable years, the Bucs and the GOAT could strike up a new deal before 2023 to keep the what would be the 45-year-old QB on their roster.

Spreading the contract monies out over those three voidable years frees up about $19 million in cap space, according to NBC Boston.  With the salary cap being reduced from $198 million to $185 million for 2021, teams can use all the help they can get and are having to get creative with the contract calculators.  Many veteran players across the league are still sitting on the FA list due to these cap cuts that stem from revenues falling short of the norm, thanks to 2020 and COVID –19.

Unfortunately for the Bucs, they are one of many teams that are in cap trouble after the 2021 reduction. However, the Bucs front office is slick with a calculator and are creative contract writers.  Much like Brady, re-signing LB Lavonte David took some ingenuity as well; David signed a 2-yr/ $25M contract.  Similar to Brady, it’s actually a 5-year deal with the last 3 years voidable, again freeing up more space to keep as many returning players as possible. I believe it’s the expectation of teams that the cap space will be increased by the time these voidable years will come into play on the back end, which allows them to play with these numbers the way they are.  WR Chris Godwin is another key member that will return in 2021 as he was slapped with the Franchise Tag this offseason.

Although the Bucs have now secured some key returners, there are still some big names that I’m sure are being talked about as we speak.  TE Rob Gronkowski, WR Antonio Brown and RB Leonard Fournette round out the offensive ranks that are still yet to re-sign. Defensively pass-rusher Shaq Barrett and defensive tackle Ndamukong Suh are also among the notable players that I’m confident the Bucs would like to see return in 2021.  Can they pull some additional rabbits out of their hat?