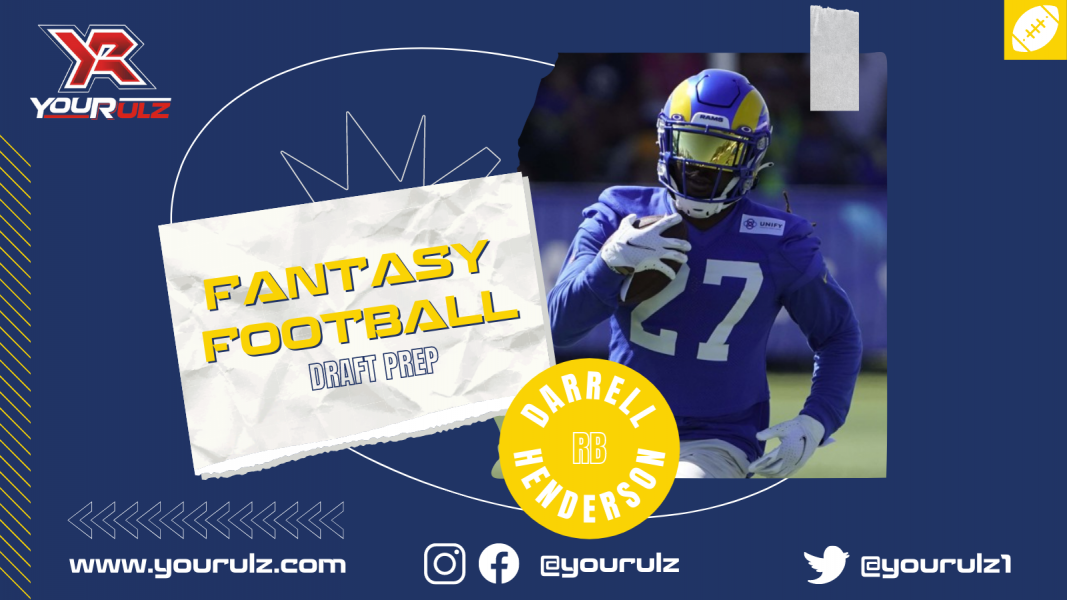 IRVINE, CA - JULY 31: Darrell Henderson Jr.#27 of the Rams working out during the Los Angeles Rams Training Camp on July 31, 2021, at UC Irvine in Irvine, CA. (Photo by Icon Sportswire)

Darrell Henderson starred at the University of Memphis, where he was the lead dog on a team that also featured fellow pros Antonio Gibson (WAS) and Tony Pollard (DAL), as well as Kenneth Gainwell (PHI) and Patrick Taylor, Jr. (GB).  Henderson’s final season at Memphis saw him finish with over 2200 yards.

With the Rams, Henderson finished 2020 as the RB31 on 154 touches in 15 games.  Additionally, Football Outsiders had Henderson with the 4th best DVOA (Defense-adjusted Value Over Average) in the league last season.  With Malcolm Brown gone and Cam Akers out with an Achilles injury, the stage is set for Henderson to take control and launch himself into the top 10 RBs this season.

But a few things are now working against Henderson:

Henderson has been injured three times recently. There was a sore ankle earlier in preseason workouts.  Then there was a hand injury and, most recently, a thumb injury. Fantasy owners do not know if they can trust Henderson to be even an RB2 because of this history of durability/availability issues.

Last season, the Rams crushed it on the offensive line, finishing with Football Outsiders’ seventh best run blocking (adjusted line yards) and second-best pass protection (adjusted sack rate).  However, they lost their center to another team, LT Andrew Whitworth is 40 years old (though still playing well), and some questions on the right side of the line.

After this last injury to Henderson’s thumb, the Rams made a deal with New England for the services of the former first round pick, Michel. With Akers out, this deal makes a ton of sense, but also calls into question how much Michel will work for the Rams, and whether he will get the coveted goal-line carries.

Henderson had been enjoying some rise lately, as the preseason attrition and realization of his role and abilities started to raise his stock, landing in the late third round of drafts, sometimes as the RB1 in drafts that prioritized pass catchers.  Given his injury history and lack of record of accomplishment of anything substantial within an NFL workload perspective, he was starting to float into high-risk territory.

Now, after the latest injuries and trade for a player with the label “former first rounder” like Michel, the balloon has popped on Henderson a little, seeing his immediate ADP drop in some sites, as reported by FantasyPros’ ADP scoreboard.

Henderson dropped down to RB21 on that scoreboard, which puts him in the low end of RB2 territory in 12-team leagues. This is still fair territory for Henderson. You are not getting a discount on him, but you are not overpaying him at this point.  Running backs around Henderson include D’Andre Swift (DET) and Josh Jacobs (LV) ahead of him and Miles Sanders (PHI) and James Robinson (JAX) behind him.

When news breaks (like the Michel trade) and folks started buzzing about Henderson’s health, it impacts his draft stock as we have started to see here.  And where one may have been bearish on Henderson as his stock was rising, if he continues to drop, he could suddenly find himself in value territory.

Remember that Henderson was never going to be a 280-carry running back, so Michel is simply replacing those backup carries vacated when Akers got hurt and Henderson stepped up into the RB1 role for the Rams.  And while injuries are always a factor, they are usually baked into projections already, and those projections are what usually drive ADP levels/tiers.

Between his advanced stats showing a plus running back, his apparent RB1 status with the Rams, and his falling stock, Henderson may just be a sneaky value pick in the fourth round of 12-team drafts, as a low risk RB2.