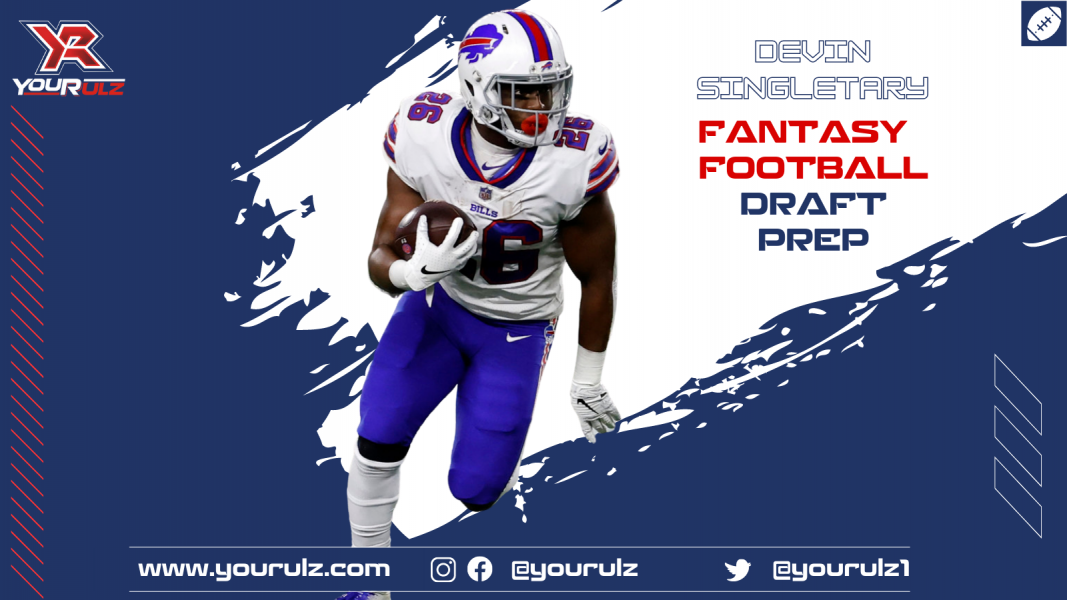 FOXBOROUGH, MA - DECEMBER 28: Buffalo Bills running back Devin Singletary (26) runs with the ball during a game between the New England Patriots and the Buffalo Bills on December 28, 2020, at Gillette Stadium in Foxborough, Massachusetts. (Photo by Fred Kfoury III/Icon Sportswire)

In fantasy football drafts, the key to winning a title (along with not blowing your first and second round picks) is often who you draft later.  Depending on the size of your league, the deeper the it is, the more critical it is to draft very well in the middle and later rounds, where you are selecting your RB3-RB5s and WR4-6s.

In 16 to20 man rosters, where you might be starting 2-3RB and a Flex position or two, this is a critical time to make sure you are not tossing aside these huge picks that can come back to win the league as the inevitable roster attrition happens due to the long (even longer this year) season.

One of the key areas of depth building is in selecting running backs that have a path for greatness.  An injury here, or simply a spike in opportunity, and you have a player that can be the 40th player selected at that position to a top 25 player for the season.  It may not seem like much, but those add up. Toss in the occasional mega-spike to a top 10 player at that position who was way back in the draft, and you have a special season cooking.

Those players often must have a couple of things going for them.  One, is opportunity.  Injuries, sudden shifts in roles, and other factors suddenly bring more snaps, touches, and scoring opportunities to them.  Secondly, they must have the talent to take advantage of that shift, else the benefit might be much smaller and shorter lived.

Devin Singletary is currently living in such a place.  A super-talented back with game-breaking skills, but plays with other players that also have such ability.  As such, roles have been divided up and only one person, Buffalo QB Josh Allen, can truly have a big fantasy impact.  Truth be told, this piece may also be written about Singletary’s backfield teammate, Zach Moss, but Moss today is being selected five running back slots higher than Singletary, so it is Devin that has the sneakiest upside here.

Singletary is currently being drafted as the RB41, which is firmly in RB4 territory in 12 team leagues.

Here are some ADP of running backs taken ahead of Singletary:

For Singletary, who is 23 years old, has plus speed, is used in the pass game (91 targets over two years), and plays on a good offense that brings a lot of scoring opportunities, this is too low.

Even last season, Singletary finished as RB37, even as Moss finished as RB42 and Josh Allen finished as one of the top players overall, depending on your scoring system.  Football Outsiders projects Singletary as RB28, which gives you an idea of where some ceiling is for Devin, even without other factors tilting the opportunities his way.  Watching the preseason games through the first couple of weeks, it was Singletary, as usual, getting the lead snaps, with Moss spelling him off the bench.

Josh Allen typically has the lead in scoring near the goal line, with either run or pass, and then Moss, but if just a couple more heads Singletary’s way, it shifts his outcomes quickly.

When you are drafting for depth, you want players who can score for you if you have to plug them in, but also have the upside to exceed that draft slot. Singletary checks both boxes and is a great pick anytime around pick 100 in any format.