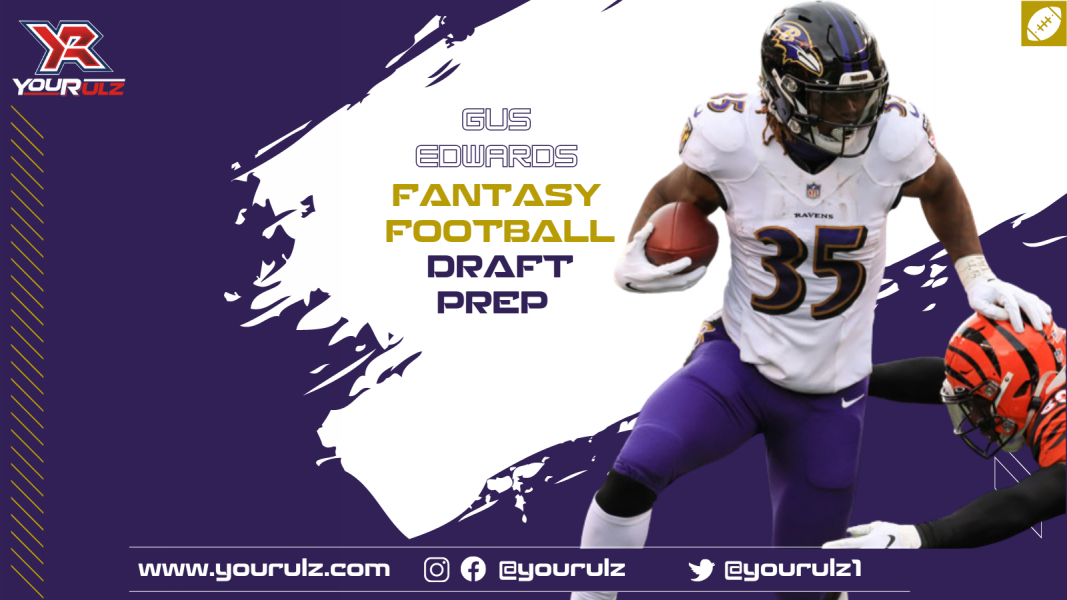 CINCINNATI, OH - JANUARY 03: Baltimore Ravens running back Gus Edwards (25) carries the ball during the game against the Baltimore Ravens and the Cincinnati Bengals on January 3, 2021, at Paul Brown Stadium in Cincinnati, OH. (Photo by Ian Johnson/Icon Sportswire)

When JK Dobbins went down in his last preseason game, he joined a sad list of running backs who had been lost in the preseason.  Players lost in games that did not count for a single fantasy point, yet after they have been drafted in many, many leagues.  One of the earliest fantasy post-draft/pre-season injuries in my history was in 1992 when Terry Allen, then of the Vikings, was drafted early and lost early. He was not the first and has not been the last.

For teams that have drafted/rostered Dobbins, now the waiver wire becomes a friend.  Maybe those teams decided to draft Dobbins’ teammate with the run-heavy Ravens, Gus Edwards. But for teams and leagues that have yet to draft, where do you now take Gus Edwards, who assumes the RB1 role with Baltimore?

Whenever a top running back goes down, there is an assumption that the RB2 automatically gets all the rights and market share that his RB1 teammate had.  But this is not always the case. Often, the roles, responsibilities, and touches get spread around the team.  Maybe 75% of the load does go to the RB2, but the RB3 gets a little more, as does the passing game, etc.

With the Ravens, Edwards does have a lot of trust with the team already.  In fact, it was he, and not Dobbins, that in 2020 led the Ravens running backs in rushing plays. Dobbins was more effective, registering a league-leading 26.1% defense-adjusted value over average (DVOA – Football Outsiders).  Therefore, Dobbins was the favorite to assume even more activity in 2021.

However, Edwards was also excellent in 2020.  The player, nicknamed The Gus Bus, turned in a 17.5% DVOA, which was good for seventh in the league.  This is a player who was highly effective in his own share of carries and has the size to continue to score at close range.

So, knowing this, do we simply place Gus into the same draft slot as we had Dobbins?  You could do that, but know that others do not value Edwards as highly as the advanced metrics do. Currently, his draft slot is only up to RB30, whereas Dobbins was a top 15 player.  Edwards is currently going after Damien Harris, Chase Edmonds, and Raheem Mostert.

Much is made about his lack of inclusion in the pass game.  Even though he has been effective, statistically he has not had many targets at all when on the field (only getting 13 such plays in 2020).  Even in PPR leagues in 2020, Edwards finished a respectable 37th.  Combined with Dobbins’ 24th place finish, the total would have been a top 10 back.

However, considering the Ravens’ league-leading 55% of plays that were running plays in 2020, the level of trust the team has in Edwards, and Edwards’ own super efficiency in the role, he is worthy of being drafted in the top 20 running backs, ahead of Darrell Henderson (RB21), Mike Davis (RB22), and Kareem Hunt (RB23).

This would give Edwards a fourth-round grade in 12 team, PPR drafts.  As shown before, given his RB30 status currently, Gus is being taken in the sixth round in such drafts.  Edwards will likely not get 100% of the Dobbins touches in 2021; some of that will likely flow to QB Lamar Jackson, backup RBs Justice Hill and Ty’Son Williams, and the passing game targets like TE Mark Andrews.  But even with that factoring in, a RB20 projection means that you will not have to use a fourth-round pick to snag Edwards, and getting him in the fifth round, or around RB25 is excellent value.