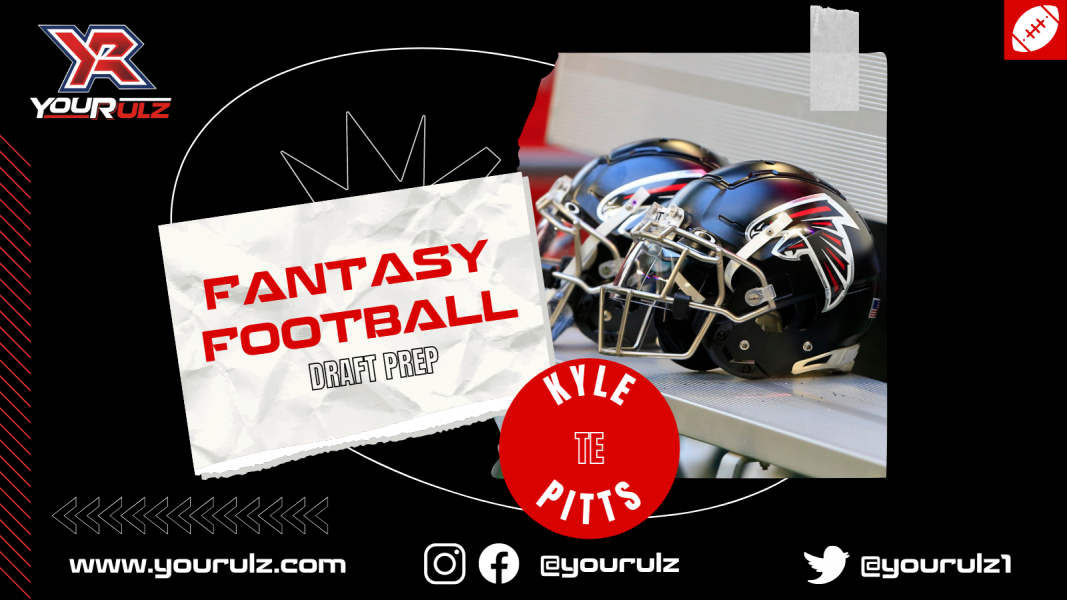 ATLANTA, GA - AUGUST 13: Falcons helmets on the sidelines during the Friday night preseason NFL game between the Atlanta Falcons and the Tennessee Titans on August 13, 2021 at Mercedes-Benz Stadium in Atlanta, Georgia. (Photo by David J. Griffin/Icon Sportswire)

To tight end or not to tight end?  That is the question that has existed ever since Ben Coates roamed the go-routes for the Drew Bledsoe led New England Patriots.  That tradition was passed down to Rob Gronkowski and then the current dominant tight ends Travis Kelce, George Kittle, and Darren Waller.

When is the best time to grab one of those guys is always a matter a roster configuration in each league. Leagues that are 2RB/2WR/1 TE are going to value the TE more than the 4RB/4WR/1TE/1 FLEX leagues will because the difference between TE4 and TE12 is going to be noticeably different than WR4 and WR 50 as replacement value gets deeper as you require more of that position.

Leagues that assign more value per catch for the TE position, in an effort to raise the value of the top tight ends and widen the replacement value gap, will also factor in here.

But wherever your league places the value on the tight end will impact where someone will take Atlanta Falcons rookie Kyle Pitts.

According to Fantasy Football Calculator, Pitts is current the TE4 in PPR drafts, behind the three TEs listed above (Kelce, Waller, Kittle) and just ahead of Mark Andrews.  Pitts dominated in the SEC and scored a truckload of touchdowns at that level, but how that translates to a different offensive scheme and the context of the Falcons in the NFL presents a wide range of outcomes to consider when drafting.

According to Football Outsiders, the Falcons were only 18th in Adjusted Sack Rate, and 26th in Adjusted Line Yards, lowering the overall production of quarterback Matt Ryan (QB14, 26TDs, 15th DVOA, 1sts 7th QBR) despite having Julio Jones and Calvin Ridley to target down the field.

There is a question, also, how much Pitts will be targeted, especially as compared to the rest of the tight end pool.  Pitts will, by virtue of his celebrity as a top pick, be on defensive preparation radar, so there is less likelihood to get a flood of early season targets provided lesser profiled tight end.

The highest targets for a rookie tight end, according to StatMuse, is 127 by Jeremy Shockley in 2002. Next is Evan Engram in 2017 with 115.  Then Jermaine Gresham with 83 for the Bengals in 2010 and so on. The fact is that tight ends simply don’t get the juice early on in terms of targets. The last rookie tight end taken in the top ten, TJ Hockenson, was targeted 59 times in 12 games in 2019.

While Pitts may certainly set rookie records for tight ends usage, it stands to reason that history hasn’t been on that side. Here are some target totals for the tight ends being drafted after Pitts’ TE4, and 42-45th overall slot:

Very flat production after the big three and most folks are drafting Pitts assuming his quick ascension to that status. Even the third best rookie tight end season would rank below TE5 last season. For context, Gresham was also a tight end from a high powered offense (Oklahoma) with a Heisman Trophy QB (Sam Bradford) lighting up the scoreboard.

Taking Pitts as high as even 45th overall means you will likely need an all-time rookie season to break even on the pick, especially considering the wide receiver talent available around that pick and the solid floor of the tight end pool afterwards.