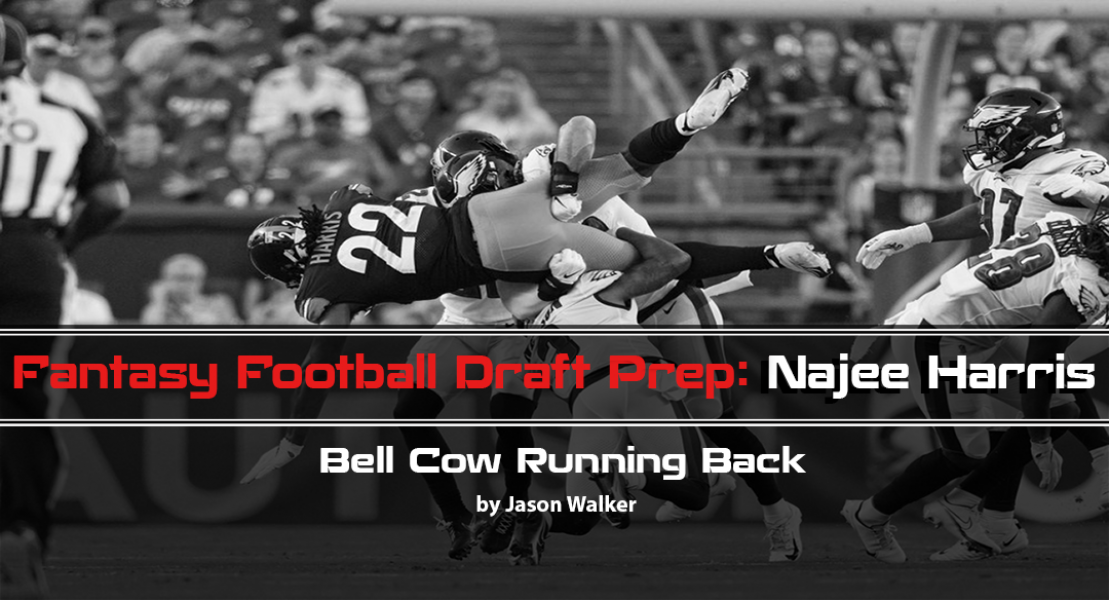 The bell-cow running back has been tied to fantasy football draft strategy dating back to the beginnings of modern Fantasy Football, where Emmitt Smith and Thurman Thomas reigned supreme.  Filling one of your running back positions with a 20 carry back who did not get pulled at the goal-line (sorry, Barry Sanders) and who didn’t come out for a pass catching back on third down (apologies, Marion Butts) was a key to fantasy success.

In the 2020s, while the game has turned to passing overall, we see running backs that can be counted on to be on the field for most plays still being drafted very highly.  Christian McCaffrey, Alvin Kamara, Dalvin Cook, and Saquan Barkley are all consensus top six picks in all formats, for example.

So maybe it should surprise when we see rookie running backs being lofted onto the same perch if they, too, bear the promise of bell-cow status.

Such as it is with Pittsburgh Steelers rookie running back Najee Harris. Harris was excellent at the University of Alabama, running with a grace and power seen in another consensus top five pick, Derrick Henry. With the deep history of Pittsburgh running backs under Mike Tomlin getting three-down status, and Harris being anointed by virtue of his first round selection by Pittsburgh, folks have lifted Harris to RB10 status and top 15 pick overall, according to Fantasy Football Calculator.

In other ADP rankings, Harris ranks between RB10 and RB12.  He ranks just behind Barkley and Austin Ekeler, and just ahead of Jonathan Taylor and Antonio Gibson.

Looking at Pittsburgh’s outlook on the season, their 2020 opponent record strength-of-schedule is the highest in the league, at a massive .574 winning percentage. Football Outsiders forecasts an 8-8 season, and the team switched offensive coaches trying to find that feeling again.

All of which means that these are not the Le’Veon Bell Steelers here, being in the lead and then blowing defensive linemen off the ball. Last season, the Steelers were elite in pass protection, but dead last in adjusted line yards in the run blocking game.

While it remains to be seen how much the change in coaching impacts play balance and line execution, the Steelers have been pretty pass happy for quite a while, finishing in the bottom ten in run play percentage and run plays per game since 2018.

All of which is to say that Harris, who looks great so far running the ball, may not have the same opportunities to rack up the fantasy points in this current climate. There is plenty of headwind, as just stated, that Harris must overcome to be a fantasy success.

And since that is the case, you must look at where he is currently being selected, RB10, top 15 overall, and ask how likely it is that he simply breaks even at that draft capital, much less has a chance to exceed.

Taylor, Gibson, Joe Mixon, Clyde Edwards-Helaire, David Montgomery, De’Andre Swift are all typically being taken after Harris, as are WRs DeAndre Hopkins, DK Metcalf, Justin Jefferson, and Calvin Ridley.  Dobbins, Montgomery, Chris Carson, and Swift are all, generally, available in the third round of 12-team drafts, making it a solid strategy to go WR ahead of Harris and take a similarly forecasted RB in the third. Darrell Henderson, Mike Davis, and Miles Sanders are borderline third-fourth round picks as well.

If you do want Harris, and you are picking on the first/second round turn, that is the time you would have to take him, even in 10-team leagues. In 12-teamers, for sure. But given the depth at the top of the position, it looks like you are picking for his 80-90th percentile outcome this season with plenty of risk compared to his wide receiver counterparts in this draft area.  Drafting for floor, rather than ceiling, with that pick.