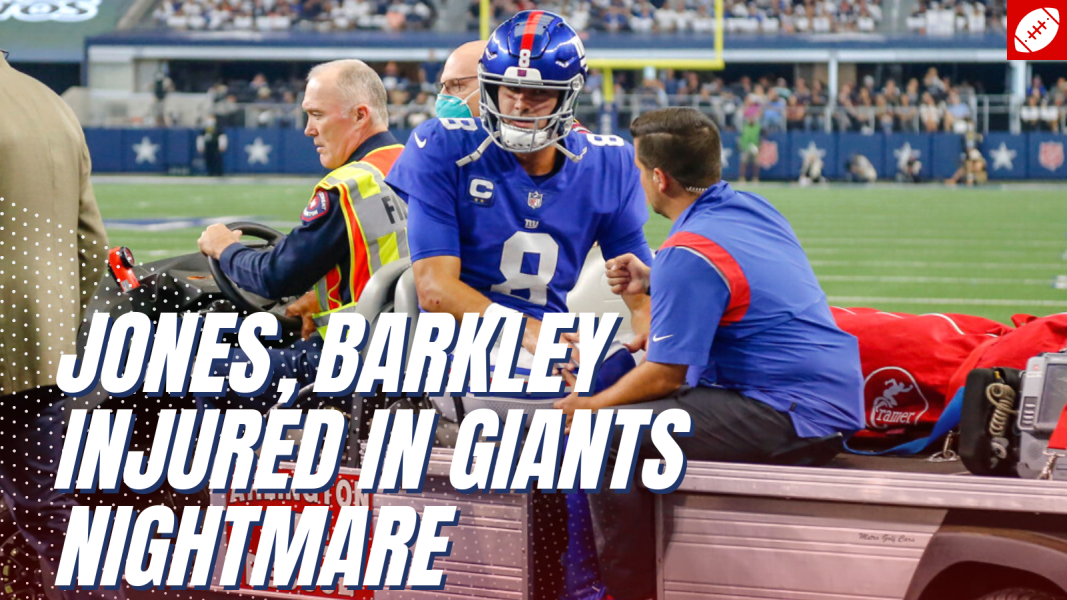 ARLINGTON, TX - OCTOBER 10: New York Giants quarterback Daniel Jones (8) gets carted off the field after he stumbles from a tackle during the game between the Dallas Cowboys and the New York Giants on October 10, 2021 at AT&T Stadium in Arlington, Texas. (Photo by Matthew Pearce/Icon Sportswire)

Fantasy football GM’s, mark your calendars because October 10th, 2021 will go down in infamy as one of the worst days to ever be a Giants fan.  Two franchise players go down to injury; one is injury prone the other is not (yet anyway).  And out of all the games to have this string of bad luck, it happens against your hated division rivals, the Dallas Cowboys.  The football Gods must hate New York.

In case you missed it, here's a recap.

RB Saquon Barkley, looking like a fantasy bust, goes down in the first quarter after rolling his ankle on the foot of Cowboys safety Jourdan Lewis.  It had to be either his cleats or his magic feet.  QB Daniel "not to be upstaged" Jones takes a helmet-to-helmet hit just short of the goal line by Cowboys linebacker Jabril Cox and has to get carted off due to concussion protocols.  All of this action took place just before halftime, and inevitably was the knife in the throat that resulted in the G-Mens 44-20 loss to the Cowboys.

It’s unclear how severe Barkley’s injury really is.  After the incident he popped up quickly, and hobbled to the sidelines without putting much weight on the injured ankle.  The Giants didn’t waste much time ruling him out for the rest of the game, which is never a good sign. He had two carries for nine yards when he went down.

The 24-year-old underwent surgery to repair a torn ACL last September, which caused him to miss nearly all of last season. He had racked up 186 rushing yards and two touchdowns on 52 carries headed into the game.

As for Jones, he was a bit uneasy getting up, and looked like he lost his balance trying to walk off the field.  He was ruled out with a concussion and was replaced by backup Mike Glennon for their final drive before halftime.

Jones had gone 5-of-13 for 98 yards when he went down. The 24-year-old had thrown for more than 1,180 yards and four touchdowns so far this season coming into Sunday’s game while completing better than 66% of his passes.

After the game, Giants coach Joe Judge said Jones should have clearance to fly home with the team despite his concussion. Barkley left AT&T Stadium in a walking boot on crutches, and underwent x-rays on his ankle.

I don't know who to feel worst for.  Saquon Barkley, who was carted off just a few games after making his triumphant return into prime time action following a gruesome ACL injury, or the fantasy football owners that took a gamble on selecting Barkley in the first round of the draft?  Barkley’s ankle looks bad and if he was your #1 fantasy RB your point totals are going to be looking bad on Monday morning.  Thank God For YouRulz’s exclusive in-game substitution feature.

Depending on the severity of Barkley’s injury, it’s looking more and more like his ship may have sailed.  I don't want to say he's a bust yet, but his vessel seems to be anchored in busted waters if you get my drift.