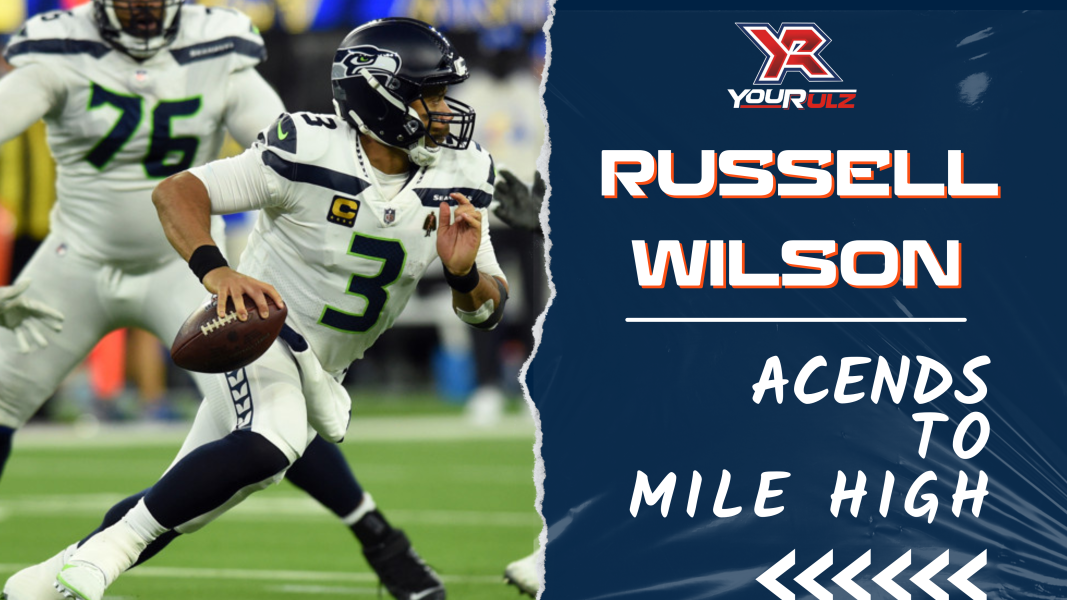 INGLEWOOD, CA - DECEMBER 21: Seattle Seahawks Quarterback Russell Wilson (3) runs out of the pocket during an NFL game between the Seattle Seahawks and the Los Angeles Rams on December 21, 2021, at SoFi Stadium in Los Angeles, CA. (Photo by Chris Williams/Icon Sportswire)

Having struggled mightily since Peyton Manning hung up his cleats six years ago, the Denver Broncos decided to go all-in on what worked the last time:  do whatever it takes to land a proven and elite quarterback.  After Aaron Rodgers took himself out of contention with an enormous contract extension with the Packers, the Broncos locked in on the disgruntled Seahawks signal-caller.  In exchange for QB Drew Lock, TE Noah Fant, DL Shelby Harris, two first-round picks (2022 and 2023), two second-round picks (2022 and 2023) and a 2022 fifth-round selection, Russell Wilson agreed to waive his no-trade clause and head to the Mile High city.

While that cost is astronomically high, Wilson has more years left in the tank than Manning did when he was signed in 2012 (33 years old vs 36) and should continue playing at a high level.  Whether or not the Broncos can surround him with the type of talent that is necessary to advance deep into the playoffs remains to be seen – gutting your next two draft classes usually isn’t the best recipe for long-term success.

Obviously, the Broncos pass catchers are over the moon with this news.  Former starting QB Teddy Bridgewater was a game-manager QB with mediocre arm strength; Wilson raises the bar significantly across the board.  Courtland Sutton and Jerry Jeudy can become the new version of DK Metcalf and Tyler Lockett, two of the most targeted WR’s in the NFL with Wilson behind center.  Massive end-zone target Tim Patrick also becomes an extremely intriguing fantasy choice.  New HC Nathaniel Hackett and OC Justin Outten are expected to run a lot of play-action passing with deep shots down the field, music to the ears of fantasy owners.  While the loss of young and talented TE Noah Fant in the trade hurts, Albert Okwuegbunam will do his best to step into the starting TE role after showing some explosiveness when given a chance in 2021.  He’s an excellent sleeper candidate.

The Broncos play in a division with great QB’s (Patrick Mahomes, Justin Herbert, and Derek Carr) that love to sling the ball around.  Wilson will have a great opportunity to put up tremendous numbers in shootouts.  In 2022, they are also looking at favorable matchups outside the division with the Jets, Colts, Jaguars, and Texans.  In Denver, Wilson has solidified his standing as a Top-5 fantasy quarterback.

Things aren’t as rosy when you’re the team that deals away your franchise QB with nothing exciting to replace him with.  Seattle has now entered full rebuilding mode – a fantasy quagmire.  While they grabbed Drew Lock in the trade, he’s been underwhelming at best so far in his career (25 TD and 20 interceptions).  With Lock only having one year left on his contract and the Seahawks now with a stockpile of #1 picks, they are expected to draft a QB in April that they hope will become the new franchise QB.  In the meantime, Lock will likely have the starting job as of Week 1 – but I would expect a short leash.

Needless to say, this craters the fantasy values of DK Metcalf and Tyler Lockett, one of the best WR duos in the NFL.  At this point, it’s very difficult to even predict any aspect of the offense, as the Seahawks don’t know what kind of QB they have in Lock and will likely be making playbook adjustments the entire offseason.  While going run-heavy is the most feasible outcome, the Seahawks even have uncertainty in the backfield.  Chris Carson missed most of 2021 with a serious neck injury, and while Rashaad Penny was a fantasy hero to end the season (714 yards in the last 6 games), he's a free agent that Seattle is likely to let walk.  It’s quite probable they will address this glaring issue in the draft – they certainly have the picks.

In short, passing over Seahawks players in your 2022 fantasy drafts may end up being the wisest outcome.