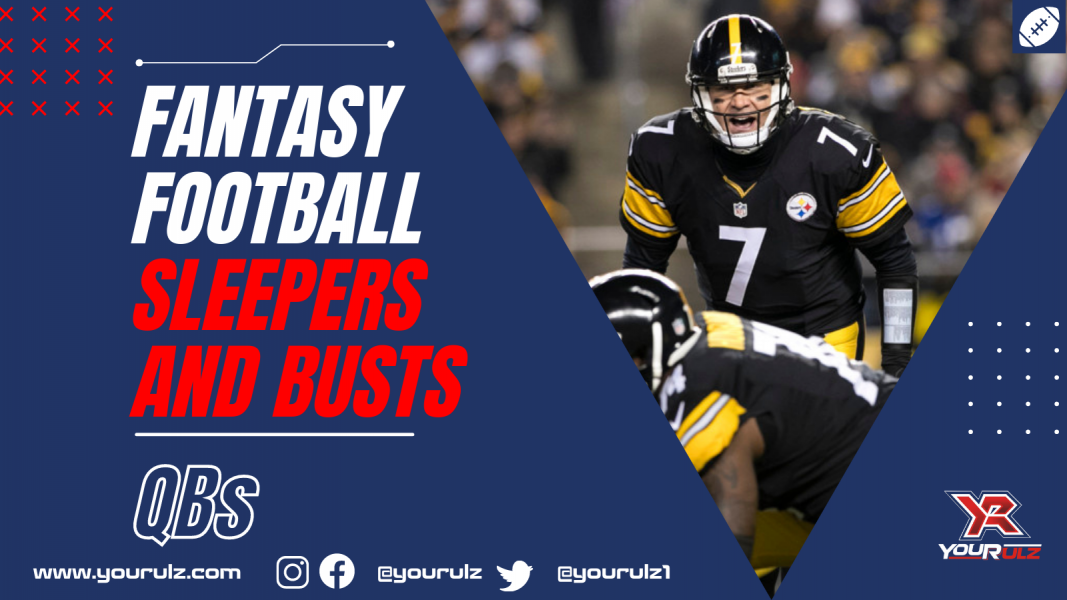 Aaron Rodgers, Packers:  I can honestly say this is the first time I’ve ever seen a reigning NFL MVP listed as a sleeper, but here we are.  In most scoring formats, Rodgers was either the top or the 2nd best fantasy QB in 2020 behind Josh Allen.  With a ridiculous 48 TD passes (and 3 rushing), Rodgers showed everyone he still has it in spades.  The offseason dragged on with Rodgers threatening to retire, but those fences have been mended for a final year in Green Bay.  So why is a top-2 QB in 2020 going between 6 and 8 among QB’s in fantasy drafts?  The coaching staff hasn’t changed, and the weapons Rodgers exploded with last season are still there.  Let someone else draft Russell Wilson or Justin Herbert ahead of him, while two rounds later you take a proven stud who is intent on an explosive rehearsal for his new team next year.

Ben Roethlisberger, Steelers:  A lot of people are ringing the funeral bell for Big Ben, who had a mediocre season coming off of major elbow surgery in 2020.  Due to decreased arm strength, the Steelers were forced to build around a short passing game, leading to a career low in yards per attempt.  However, it’s a new year, and Roethlisberger and the Steelers seem to think a lot of that missing arm strength has returned.  With a talented WR unit that includes Chase Claypool and Juju Smith-Schuster, as well as a new RB in Najee Harris to take some of the pressure off, Roethlisberger could be a sneaky pick late in drafts if those rumors are true.  In addition, with the Steelers playing the most difficult schedule in the entire NFL, Big Ben could find himself playing from behind many, many times.  That’s music to the ears of those who draft him.

Kirk Cousins, Vikings:  Cousins is a perfect example of a guy who bores fantasy players, so he inexplicably and constantly falls in drafts.  Despite finishing around 10th in QB fantasy points in 2020 (even without being a running QB), he’s being taken as a QB18 behind guys like Joe Burrow, Baker Mayfield, and Matt Ryan.  Cousins is surrounded by a huge amount of talent, both at the wideout position (Adam Thielen and Justin Jefferson) and the RB lining up behind him (Dalvin Cook).  While he won’t lead the Vikings anywhere, there’s no reason why he can’t duplicate his outstanding 2020 numbers (35 TD passes) and take your fantasy team to the playoffs – he simply has too many weapons to have a bad season.  Let some other doofus draft someone like Trevor Lawrence over him; take him late and enjoy the top-10 production.

Jalen Hurts, Eagles:  After failing in their attempt to trade up for a QB in the 2021 draft, Philadelphia has officially hitched their wagon to the Hurts star, and a lot of fantasy owners are making some big assumptions that he’s going to run (literally) with the opportunity.  I’m not so sure.  New Eagles head coach Nick Sirianni has a history of coaching classic drop-back passers (the opposite of Hurts), and he may choose to keep tight reins on his young QB.  At the very least, there are a lot of unknowns in Philly, with a brand-new coaching staff and system, and it’s impossible to know if it’s going to work.  There is also a considerable lack of playmakers on offense; Hurts may have to rely on his athletic TE’s more than he’d like.  Scrambling around also leaves him vulnerable to a lot of punishment; I’m far from certain he can make it through 17 games.  While his running potential is enticing in the draft room, there’s a lot less risk in taking safer choices like Ryan Tannehill or Matt Stafford.

Lamar Jackson, Ravens:  Coming off an MVP season in 2019, Jackson fell back to Earth in 2020, finishing 10th among fantasy QB’s.  While his rushing figures (1,005 yards and 7 TD’s) remained strong, his passing numbers crashed and burned as a lot of defenses seemed to figure him out.  Completion percentage, yards and TD passes were down, while interceptions were up.  The question is, will he bounce back or continue along this path?  His current standing as a QB4 simply does not make sense.  Running QB’s like Jackson tend to run less as time goes on; there’s no reason why it won’t happen here.  With his rushing numbers dropping into the 800-yard/7 TD region, who can reasonably expect his passing numbers to pick up the slack?  OC Greg Roman is talking a big game about more downfield passing, but I think defenses have started to catch up to Jackson.  Let another owner draft him over the likes of the much-safer Aaron Rodgers, Russell Wilson, Tom Brady, etc.

Patrick Mahomes, Chiefs:  Like millions of others, I’m a huge Mahomes fan and am constantly amazed when watching him play the position.  There’s no reason why he won’t have yet another big year.  However, this is about value, and the fact is that despite his lofty draft position, Mahomes is not significantly better than the quarterbacks behind him like he was two years ago.  Mahomes is being drafted an average of #14 overall, while the next QB (Josh Allen) doesn’t come along until pick 26.  Allen had a better year than Mahomes in 2020, along with Aaron Rodgers and Kyler Murray.  Mahomes’ yards per attempt has fallen 3 years in a row, and he seems to be getting nicked up and missing time more often each year.  While landing Mahomes is an exciting move, waiting a round or two and grabbing Josh Allen is the smarter one.