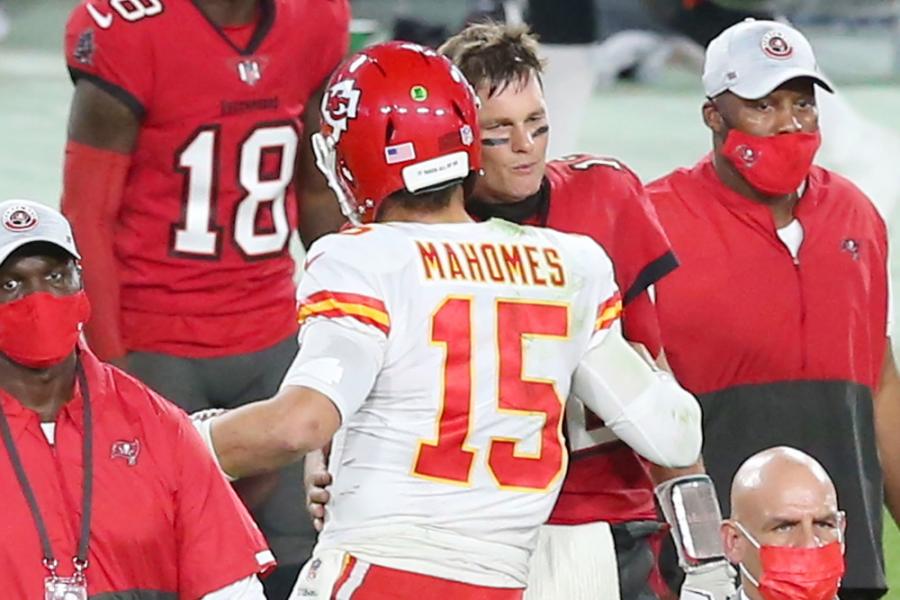 TAMPA, FL - NOVEMBER 29: Tom Brady (12) of the Buccaneers shakes hands with Patrick Mahomes (15) of the Chiefs after the regular season game between the Kansas City Chiefs and the Tampa Bay Buccaneers on November 29, 2020 at Raymond James Stadium in Tampa, Florida. (Photo by Cliff Welch/Icon Sportswire)

What’s up YouRulz fantasy football fanatics?  It’s your man about sports Terrance Freeman with my take on who has the biggest advantages in the upcoming Super Bowl and there's no sure thing in this one.

With Super Bowl LV just two weeks away, a few of my constituents have been pressing me hard to get my take on the outcome of what is being speculated as the biggest sporting event in what has been somewhat of a let-down year in sports due to COVID-19 restrictions.

I rarely find myself at loss for words or lacking at least a general opinion on a sports conversation.  I take pride in saying what I say and during a normal sports year I'm pretty much on track with whatever outcome is conjured up in most games.  But this year, like no other, has left me speechless.  This year is that one year out of 20 where the “sure thing” factor has been removed from the big game.

SURE the Bucs are hosting Super Bowl Sunday at Raymond James Stadium.  SURE the Bucs won’t have to do any traveling or temporarily adjust their practice schedule due to them being the first ever Super Bowl team that’s actually playing at home.

BUT with those Pros come the Cons.

One of those Cons for the Bucs will be media week, where Hollywood meets the NFL's modest Super Bowl participants, where players are forced to intermingle with celebrities, media, and fans.  It's unavoidable for the home team.  However, with this year’s addition of COVID-19 restrictions, teams that usually arrive in the host city a week ahead of time will now not be allowed to enter Tampa until two days prior to the game.  In short, the Kansas City Chiefs won’t be allowed to travel to Tampa until February 5th.