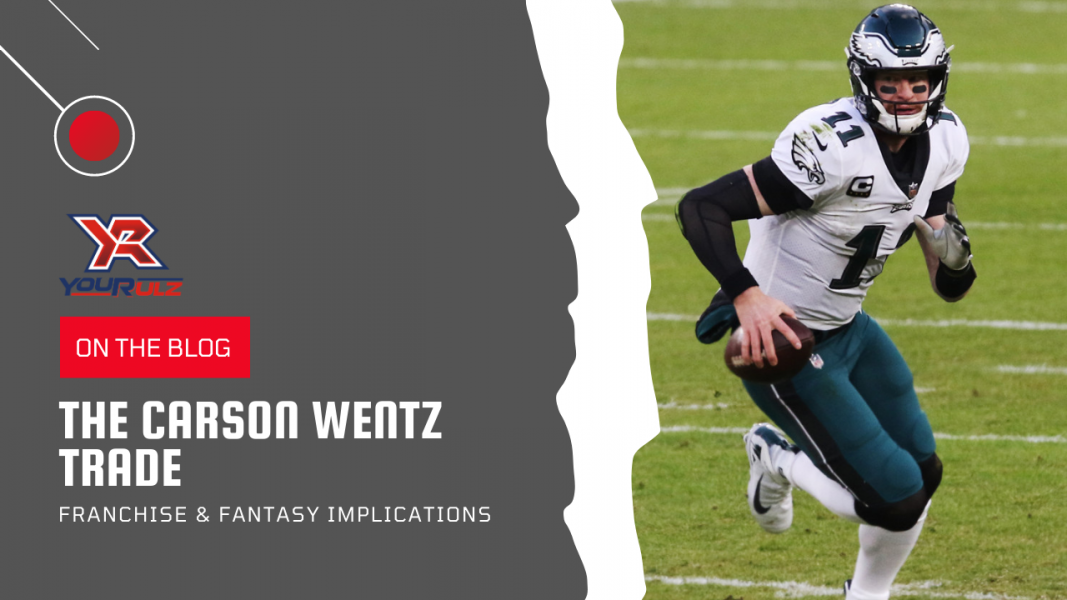 The Philadelphia Eagles drafted Carson Wentz 2nd overall in the 2016 draft, the first time they had taken a quarterback in the first round since 1999 (Donovan McNabb).  Wentz was expected to sit and learn his rookie year behind veteran starter Sam Bradford, but those plans changed quickly when Bradford was traded to the Minnesota Vikings before the start of the 2016 season.  Ready or not, Wentz was going to be thrust into action immediately.  Despite a subpar 7-9 season in 2016, Wentz completed a rookie-record 379 passes and exceeded expectations.  The Eagles felt they had found their franchise quarterback after flailing around with Michael Vick for several years in the post-McNabb era.

The 2017 season would certainly seem to confirm that, with Wentz leading the Eagles to an 11-2 record and a NFC East title before blowing his ACL in Week 14.  At that point in the season, Wentz had compiled 3,296 yards and 33 TD’s against only 7 interceptions, and was a leading MVP candidate.  At that point, it certainly appeared his unfortunate season-ending injury would end the Eagles run.  Instead, one of the most unlikely endings in NFL history took place, when backup quarterback Nick Foles carried the Eagles to their first Super Bowl win in franchise history.  Suddenly, Carson Wentz did not appear as valuable.  Could the Eagles actually consider turning to Foles?

We all know the end of the story.  Finally healthy, Wentz took over the starting job by Week 6 of the 2018 season and ended up with a 5-6 record in his 11 starts.  After winning the Super Bowl in 2017, the 2018 Eagles finished 9-7 yet did manage to make the playoffs, the first back-to-back playoff seasons since 2009-10.  However, their season was ended with a lackluster 20-14 performance against the New Orleans Saints.  People couldn’t help but wonder – could Nick Foles have taken the Eagles farther?  It was an unfortunate cloud hanging over the head of Wentz and the franchise in general.

Ultimately, Nick Foles made things easy on the Eagles, voiding the final year of his contract and signing an $88 million deal with the Jacksonville Jaguars.  Carson Wentz would no longer have to deal with those pressing questions.

The absence of Foles did not mean that the pressure did not continue to ratchet up on Wentz.  Heading in to the 2019 season, Wentz was fully healthy and entering his age-27 season, and expectations were understandably high.  So high that the Eagles rewarded those expectations with a 4-year, $128 million contract extension.  It was time for Wentz to return to MVP form.  Eagles VP Howie Roseman exclaimed at the time that Wentz would be "a great player for the Philadelphia Eagles for a long time" – famous last words in the cold and heartless NFL.

In 2019, Wentz would become the first Eagles QB to ever throw for 4,000 yards, and the only QB in NFL history to do it without a single WR having at least 500 yards.  Still, they needed to win the last 4 divisional games after a dismal 5-7 start to take the NFC East again, and Wentz’s play stumbled to end the season.  Wentz would end up leaving in the first quarter of the Wild Card game against the Seahawks with a concussion, and their season was over quickly.  He never seemed to be able to get past the injury bug, and questions about his durability and focus were starting to be made.  However, the 2019 Eagles slogged through a skill-position injury nightmare; Wentz couldn’t be asked to do it all himself, could he?  While the Eagles brass continued to say all the right things, they blindsided Wentz by taking QB Jalen Hurts in the 2nd round of the 2020 NFL draft.

The 2020 season is when things completely fell apart for Carson Wentz.  After a mere 3 games and 6 interceptions, the media started openly asking if it was time to bring in Hurts.  While HC Doug Pederson brushed off such talk, he started increasing packages for Jalen Hurts as the season wore on and the turnovers piled up, taking the ball out of Wentz’s hands.  In Week 13, he was finally benched for Jalen Hurts for good.  He was leading the entire NFL in fumbles, interceptions, and sacks taken.  Overall in 2020, Wentz became the 6th passer in NFL history whose passer rating dropped more than 24 points below his combined rate over the previous three seasons, and the only QB on that list younger than 30.  The Eagles wanted to move on, but they were faced the same problem the Los Angeles Rams had with Jared Goff – what team would take their QB with that mega contract?

The Indianapolis Colts were dealing with their own QB issues.  After franchise QB Andrew Luck abruptly retired prior to the 2019 season, the franchise was scrambling for his replacement.  In 2020, 37-year old Philip Rivers performed admirably and the Colts made the playoffs, but it was a short term arrangement; Rivers retired after one season in Indianapolis, leaving a gigantic hole behind center.

With Wentz on the trading block, the Colts were considered favorites from the outset, since HC Frank Reich was the Eagles offensive coordinator in 2016-17 and had been a big part of their Super Bowl run.    Reich was familiar with and very much a fan of Carson Wentz – the arrangement made a lot of sense.  After a flirtation with the Bears, the Eagles traded Wentz in exchange for a 2021 third-round pick and conditional 2022 second-round pick.  The conditional second-rounder becomes a first-round pick if Wentz plays 75% of the snaps or 70% and the team makes the playoffs.  It wasn’t anywhere close to the compensation Howie Roseman was looking for, but the market for Wentz simply never materialized.  Philadelphia will be taking on $33.8 million in dead cap penalties as a result of the trade, the largest in NFL history for one player.

HC Frank Reich obviously believes he can salvage Wentz, who is still only 28 years old.  Since Reich left Philadelphia, it was reported that Wentz simply didn’t respond well to the new assistant coaches, and never really gelled with his teammates.  Reich has a lot more to fix than just mechanics on his new starting QB; getting him to build up a good rapport with his teammates will be essential right off the bat.

The Colts are a playoff team with a lot of talented skill players already in place, something Wentz was often missing in Philadelphia.  Wentz will have a rising star RB in Jonathan Taylor, who rushed for 1,169 yards and 11 TD’s with an astronomical 5 yards per carry in 2020.  A running attack can help take the early pressure of Wentz if Reich wants to bring him along slowly.  The Colts use a variety of young talent at WR, with no clear-cut #1; T.J. Hilton will likely end up leaving in free agency.  23-year old Michael Pittman, who is an enormous (6’ 4”, 223) wideout with terrific speed, will likely end up taking on that role.

The 11-5 Colts lost the NFC South division to the Titans via tiebreaker in 2020, and it should again be a close battle between those teams in 2021.  The Colts also have an underrated top-10 NFL defense (332 YPG).  The rebuilding Houston Texans and Jacksonville Jaguars round out the rest of the division, and it will be interesting to see what new Jaguars HC Urban Meyer brings to the table.  His reputation for quick turnarounds of college teams isn’t questioned, but the NFL is a completely different animal.

Needless to say, the progress (or lack thereof) of Carson Wentz will be a central factor in the improvement or digression of the 2021 Colts.  It was only a couple of years ago that Wentz was considered a MVP candidate.  A return to success certainly isn’t out of the question, especially under the wing (and play calling) of creative head coach Frank Reich.

Carson Wentz wasn’t the only Eagle to move on – HC Doug Pedersen also followed him out the door by getting himself fired a mere 3 years after a Super Bowl title.  He was replaced by Colts OC Nick Sarianni, a 39-year old who moved his way up the ranks quickly over the last decade.  The Eagles also added former Colts passing game specialist Kevin Patullo as passing game coordinator, an obvious attempt to re-create the Colts success through the air under Frank Reich.  However, Reich handled (and still does) all the play-calling duties in Indianapolis; can Sarianni and Patullo replicate his success on their own?  Questions remain.

While they may disagree, it’s clear that the Eagles are rebuilding; there are a lot of holes to fill at multiple positions.  Jalen Hurts also remains an enormous question mark.  Los Angeles Chargers OC Shane Steichen was brought in as the new offensive coordinator after coaching QB Justin Herbert to one of the best rookie campaigns in history.  However, it’s not clear who the Eagles will be taking at #6 in the upcoming draft; a quarterback remains a real possibility, which would completely muddy up the waters.  Hurts brings a running dynamic to the QB position, but it’s the plays with his arm that ultimately end up winning games – there’s a lot of work to be done here.

While RB Miles Sanders remains one their most promising and talented players (5.3 YPC in 2020), he’s never had a heavy workload and it’s unclear if he could hold up for 300+ carries.  The exodus of RB coach Duce Staley to the Lions also creates additional question marks about how the running game will be implemented.

Rebuilding or not, teams in the NFC East never seem to be out of the playoff hunt, even with losing records.  In 2020, the Washington Football Team won the division (and landed a home playoff game) with an astounding 7-9 record.  While the return of Dak Prescott likely makes the Dallas Cowboys the favorites to take the division in 2021, it’s always possible Jalen Hurts creates a spark that makes this Eagles squad surprise contenders.  After all, 7 or 8 wins may be all that’s needed to do just that.

While a lot of people will scoff at Wentz’s fantasy potential in 2021, keep in mind they did the same thing with Philip Rivers, who ended finishing much stronger than predicted in Frank Reich’s pass-happy offense.  Unlike Rivers, Wentz is walking into a situation where he’s completely familiar with a coach, system, and the play-calling; an enormous advantage in which he could potentially hit the ground running.  While it would be silly to rank him in the top-12 signal-callers at this point, Wentz is a very interesting fantasy choice, an easy starter in 2-QB leagues and a sneaky sleeper choice at the end of 1-QB leagues.  Also do not forget that Wentz is underrated as a runner – he rushed for 276 yards and 5 TD’s last season in only 12 games.

As for the Eagles, Jalen Hurts becomes extremely intriguing, primarily because he runs the ball so much.  In only 4 games as a starter, he rushed for 272 yards and 3 TD’s, stats that would extrapolate out to over 1,000 yards and 12 TD’s over a full season; Lamar Jackson-type numbers.  As a result, you’re going to see some top-10 prognostications for Hurts, but I’m a bit more skeptical.  It’s an enormous risk to select Hurts as a top QB when he hasn’t even remotely shown he can be a QB at the NFL level.  He doesn’t do you any good when he’s benched by Week 8, or suffers an injury running around like Randall Cunningham.  Consider him a very high-risk, high-reward pick.

It’s remarkable how much this scenario mirrored the Jared Goff deal.  Like that deal, Wentz was considered practically untradeable due to his bloated contract.  However, and also like the Goff deal, Wentz was ultimately traded to a team with personnel that are already familiar with him, so it was seen as less risky in their eyes.  While the Rams overpaid for Matt Stafford, the Colts got a far better value and a younger QB to boot.  If Wentz ends up revitalizing his career under Reich, it may go down as one of the best trades in NFL history.