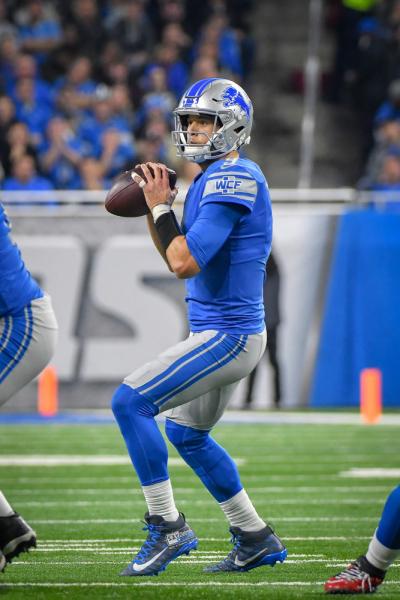 At the end of the 2018 season, Jared Goff had built up a nice list of accomplishments for a 24-year-old QB. While generally being written off as a bust under the Jeff Fisher regime, he had just passed for 4,688 yards and 32 TD’s in new head coach Sean McVay’s explosive new offense, and had led the Los Angeles Rams to Super Bowl LIII, where they came up 10 points short against New England. While they ultimately didn’t bring home the trophy, the Rams felt they had clearly found their franchise quarterback, and rewarded Goff with a 4-year contract extension worth $134 million ($110 million guaranteed).

2019 would unexpectedly show a Rams team in decline. While Goff passed for a similar amount of yards, his TD passes and completion percentage were significantly down, while his interceptions shot up. Los Angeles stumbled through a 9-7 season and completely missed the playoffs after a Super Bowl appearance the year before. Goff’s regression exposed the fact that he needed near-perfect protection to be productive, and improvising plays once they broke down was a glaring weakness. At this point, that albatross of a contract must have started weighing heavily on the minds of Rams management; could they have made a big mistake?

2020 put forth a clear answer to that question, as Goff continued his downward spiral. While completing a higher percentage of his passes, McVay preferred to lean on the run and be conservative with his QB, who he seemed to trust less and less as the year went on. Goff’s inconsistent play was capped off by a broken thumb late in the season, and McVay was so frustrated he even started lowly backup John Wolford over a healthy-enough Goff in the playoff game against the Seahawks. With the season ending in an uninspiring loss to Green Bay, Goff finished near the bottom of the NFL in yards per attempt. McVay, clearly frustrated, refused to endorse Goff as his starter, but what could they do? Who in the world would consider taking on that insane contract?

Coming off another losing season while firing yet another failed head coach, the Detroit Lions were looking at a full rebuild. After 12 seasons under center, it was decided that trading Stafford (who had two years left on his contract) for youth and/or draft picks was the best decision for both parties. Stafford was coming off another solid season despite a myriad of injuries and his top receiver (Kenny Golladay) missing nearly the entire year. Always known for having one of the strongest arms in NFL history, the Rams were drooling over the point-scoring possibilities of such an acquisition, but they would have to compete with Washington and San Francisco for Stafford’s services. Maneuvering huge salary cap implications and surprising everyone, the Rams traded Goff, a 2021 third-round pick, a 2022 first-round pick, and a 2023 first-round pick to the Lions for Matthew Stafford. Sean McVay had gotten his quarterback.

By making the trade with the Rams, Detroit evidently wanted Goff as more than just a stopgap QB. New Lions GM Brad Holmes was the Rams' director of college scouting the year they made Goff the No. 1 overall selection, and new Head Coach Dan Campbell was also on board. Goff has since expressed being happy in a place where he’s wanted, something that should have a positive mental effect. However, the Lions will need to slap top-WR Kenny Golladay with the franchise tag; he’s the key player for any real impact for Goff and the offense as a whole. Detroit also brought in Mark Brunell to serve as QB coach – perhaps he can help Goff become more productive when the pocket breaks down.

Detroit is in a rebuild and coming off a 5-11 season, so 2021 expectations are understandably low. However, there’s a lot to like about the new coaching staff. Dan Campbell was a top assistant for the New Orleans Saints for years, and he brought in Anthony Lynn as Offensive Coordinator and Aaron Glenn as Defensive Coordinator. While these are very enthusiastic and aggressive coaching choices, they’ll be challenged with glaring talent holes on both sides of the ball.

While Green Bay still dominates the NFC North, the Bears and Vikings are middle-of-the-road teams that could end up with plenty of their own struggles in 2021. If Goff turns out to be serviceable, the Lions have a chance to improve on their 5-win record, but the playoffs appear well out of reach. Fortunately for Detroit, they have stockpiled some extra high draft picks through the Stafford trade that could finally take them to the next level; it will be up to GM Brad Holmes to make every one of them count.

Unlike the Lions, the Los Angeles Rams are a long way from rebuilding. After tasting a Super Bowl appearance just two short years ago, Sean McVay is desperate to get back to the creative offensive firepower that took him there. Very few QB’s can stretch the field like Matt Stafford, something that was noticeably absent under Jared Goff. However, target-monster WR’s Robert Woods and Cooper Kupp aren’t known as field stretchers; the Rams may look to acquire more speed in the draft. They also split RB duties equally among Cam Akers and Darrell Henderson, although the explosive Akers took the baton late in the year and is expected to be the primary workhorse in 2021.

The Rams are arguably the top defense in the NFL, a fact that alone makes them playoff contenders. DT Aaron Donald won Defensive Player of the Year for the 3rd time in 4 seasons; he may be the most important and impactful non-quarterback in the entire NFL. However, the Rams are going to have some tough contract decisions to make with both Jared Goff and Todd Gurley’s dead money still counting against the salary cap, including along the offensive line.

The NFC West is a competitive division, with the other 3 teams (Seattle, Arizona, and San Francisco) all able to put competitive teams consistently on the field. Seattle, the current division champion, faded down the stretch in 2020 and exited the playoffs with a whimper. Can head coach Pete Carroll keep his Seahawks at the top? Questions remain, but the acquisition of Stafford has to make Los Angeles the 2021 favorites to knock them off their perch.

Finally, the elephant-in-the-room pertains to Matt Stafford, who only played in 3 playoff games in 12 seasons and lost all 3 of them. Will he be able to perform in the postseason and get the Rams back to the Super Bowl? The history of the NFL is littered with talented quarterbacks who wilted in do-or-die contests; McVay is hoping Stafford is a late bloomer in this regard. It isn’t until then that we will know whether this trade was worth the immense cost.

It’s difficult to see anyone ranking Jared Goff in their top-15 Fantasy QB rankings. Leagues that start only one quarterback will barely give Goff a second look. However, could Goff make some noise down the stretch and earn some bye-week or flex starts?

There’s a lot to like about new Lions OC Anthony Lynn, who was fired as the Chargers head coach after the 2020 season. Lynn put forth an offense in Los Angeles that finished in both the top-10 in passing and rushing, landing QB Justin Herbert the Rookie of the Year trophy. The Lions are desperate to get talented RB D’Andre Swift the ball more in space as a pass catcher, and Lynn is already planning to get Swift lined up at WR if necessary to make that happen. Assuming the Lions keep Kenny Golladay under the franchise tag, Goff will have some weapons to work with.

The Lions are also expected to finish in the bottom 3rd of NFL defenses, giving Goff a lot of reasons to keep slinging the football. Division foes Green Bay and Minnesota tend to get into a lot of shootouts, and lowly Atlanta and Cincinnati are also on the 2021 schedule. If Goff can clear the cobwebs out of his head, he could make some fantasy noise. He’s done it before.

Matthew Stafford becomes a much more interesting fantasy choice. Until last season, Stafford had never missed an NFL game, but he’s been dealing with injuries to his back, thumb, ankle, and ribs ever since. Now 33 years old, is it reasonable to wonder if he’ll hold up? A fair question.

Assuming he does, I think projecting Jared Goff’s 2018 statistics (4,688 yards and 32 TD’s) would be a solid estimate, which would have ranked Stafford around 10th in 2020. He doesn’t run the football, which hurts his stock, and the Rams currently are not employing a field-stretching WR. The Rams top defense also keeps shootouts to a minimum, although he will get to face Russell Wilson and Kyler Murray twice, as well as Aaron Rodgers and Tom Brady in 2021. A fantasy ranking between 9 and 12 seems the most appropriate.

The trade proved there’s no such thing as an “untradeable” contract in the NFL; if two teams want to make something happen, they will. It also exhibited once again the incredible value of NFL franchise quarterbacks. If Detroit can get a serviceable young QB and multiple first-round picks for a 33-year old injured passer who has never won a playoff game, what could the Texans get for DeShaun Watson?