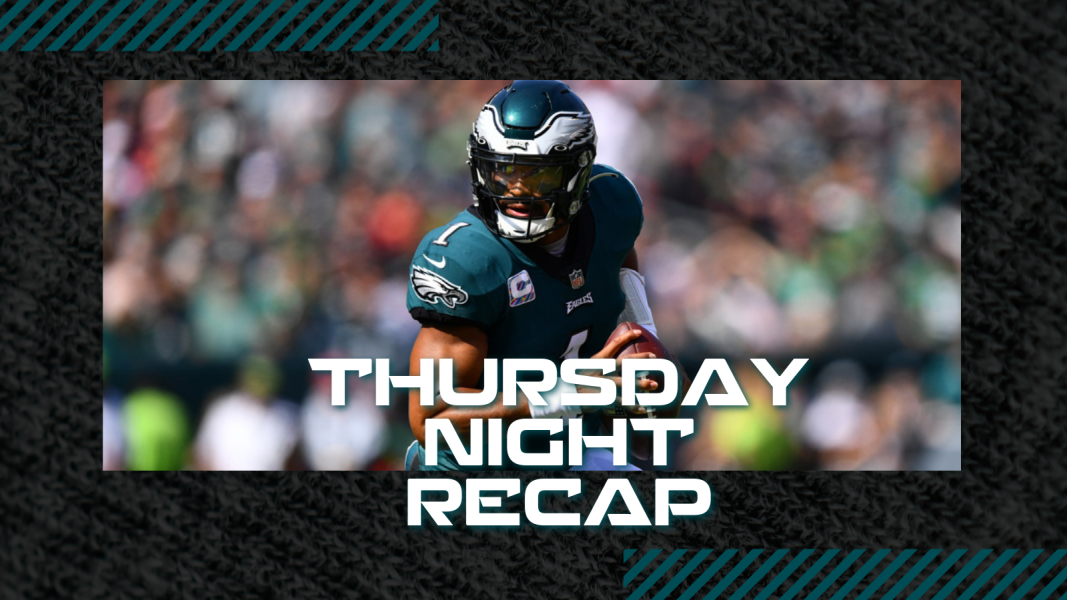 PHILADELPHIA, PA - OCTOBER 03: Philadelphia Eagles Quarterback Jalen Hurts (1) scrambles with the ball in the first half during the game between the Kansas City Chiefs and Philadelphia Eagles on October 03, 2021 at Lincoln Financial Field in Philadelphia, PA. (Photo by Kyle Ross/Icon Sportswire)

For the Bucs, Tom Brady received the kickoff and marched right down the field in a five minute, 10-play drive capped off by an O.J. Howard two-yard touchdown reception.

As for the Eagles, they responded with Hurts using his feet and his arm to drive down the field.  The big play of the scoring drive was a 45-yard pass interference call against the Bucs, which put the Eagles on the five-yard line.  From there, Jalen Hurts found Zach Ertz for the touchdown pass.

However, it was downhill from there for Philadelphia.  With Brady connecting with Antonio Brown on a 23-yard pitch and catch for a touchdown, and RB back Leonard Fournette finishing off an 11-play drive for a TD just before halftime, the Bucs went into the break up 21-7.

Philadelphia struggled offensively after the explosive opening drive, putting up just one first down and going into the half with a dismal 73 yards of total offense.

Fast forwarding to the 4th quarter, the Eagles finally made it interesting in getting the game within 6 points after capitalizing on a Buccaneers failed fourth-down attempt, with a two-yard touchdown run by Jalen Hurts and a successful two-point conversion attempt on a pass to Quez Watkins.

Unfortunately for Philadelphia, on the Bucs next possession, a taunting call against Eagles defensive end Genard Avery on Leonard Fournette advanced the Bucs to nearly midfield.  A 27-yard completion from Brady to Brown on third down was enough to seal the deal and shut the door on the Eagles comeback attempt.

Final score, Tampa Bay 28, Philadelphia 22.  Kudos to the Eagles for showing signs of life and not throwing in the towel late in the second half.  Ultimately it was to no avail - Brady and the Bucs survive.