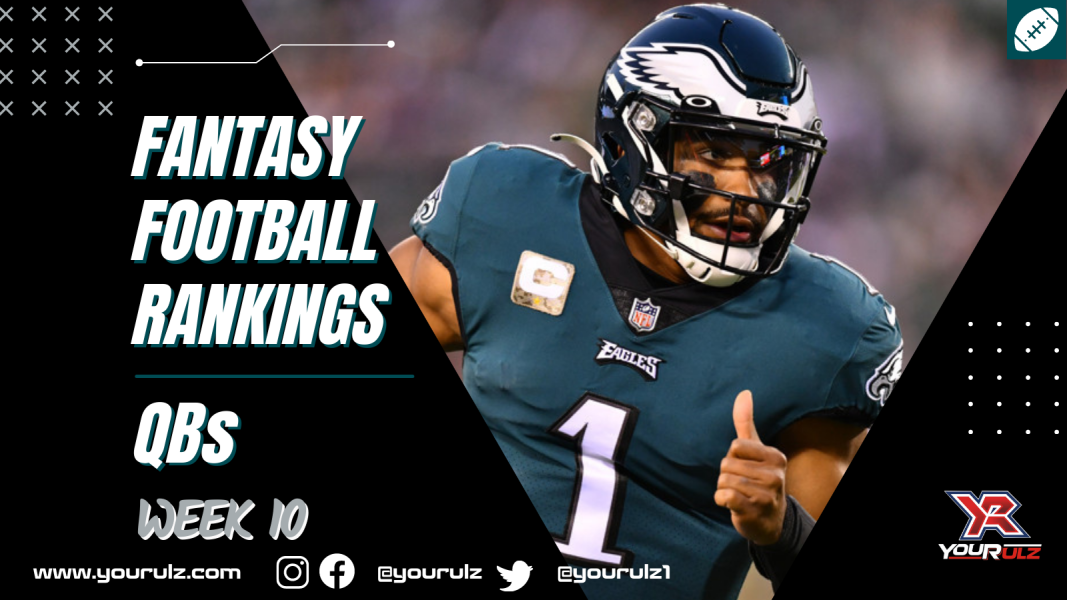 PHILADELPHIA, PA - NOVEMBER 07: Philadelphia Eagles Quarterback Jalen Hurts (1) carries the ball in the first half during the game between the Los Angeles Chargers and Philadelphia Eagles on November 07, 2021 at Lincoln Financial Field in Philadelphia, PA. (Photo by Kyle Ross/Icon Sportswire)

Lamar Jackson has proven to be the most consistent fantasy producer and there has not been a single matchup where I thought maybe he should be benched. The Ravens have a team total of 27 points and the Ravens will likely depend on Jackson to deliver the 3+ TDs and rushing for the team once again.

Washington has the 31st ranked pass defense. Tampa Bay has the 1st ranked pass offense. Should be a deck of a day for Mr. Brady once again. In case you might overthink things and think the Bucs will be too far ahead and cap Brady’s day, know that Washington has a 10th ranked run defense so if the Bucs do blow them out, it should be on the production of the passing game.

On the flip side, because of this negative game flow, Taylor Heinicke will have to throw, a lot. The Bucs are also the #1 run defense in case Washington might think they can run the ball to keep Brady off the field. Volume of attempts, not efficiency pushes Heinicke into streaming starter territory.

Minnesota and the Los Angeles Chargers matchup but both defenses welcome the run as their pass defenses are much better. This should lower the ceiling of this game at least until one team falls far enough behind to have to throw.

Matt Ryan has been on a roll lately, but comes across a Dallas defense that is top ten against the pass and merely middle of the pack against the run.

Mac Jones goes against the Cleveland defense that is ranked fifth against the run, so expect Bill Belichick to exploit the obvious advantage there and make Jones another QB bye week streaming option.

The Browns really want to run the ball, with the third highest rushing play percentage in 2021. New England is sixth ranked against the pass, but 17th against the run.  Hence, the Browns should be able to run the ball and limit Baker Mayfield’s attempts again, limiting his ceiling as a possible streaming option.

Jaylen Hurts has rushed for 144 yards over the past two weeks with a new emphasis on running the football in Philadelphia.  Look for that to continue in Denver.