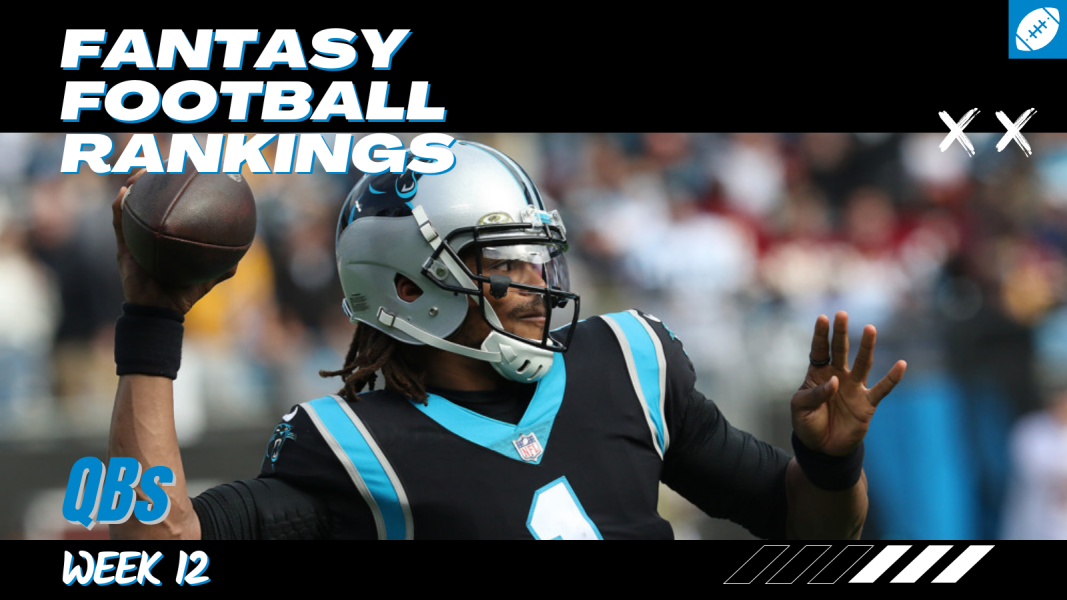 HARLOTTE, NC - NOVEMBER 21: Cam Newton (1) quarterback of Carolina throws a pass during an NFL football game between the Washington Football Team and the Carolina Panthers on November 21, 2021, at Bank of America Stadium in Charlotte, N.C. (Photo by John Byrum/Icon Sportswire)

Josh Allen takes on the New Orleans Saints, who are the #5 defense according to defense-adjusted value over average (DVOA). However, they are #1 against the run and 14th against the pass, meaning that Josh Allen, as he does weekly, will likely be tasked with being responsible for every single one of the 26 points Vegas figures the Bills to score.

Cam Newton is back in the saddle and has utilized a deadly combination with the now-healthy Christian McCaffrey.  The lowly Dolphins offer up a terrific start opportunity.

Tis the season for thanks, and we can be thankful that Tom Brady will continue to throw against a Colts defense that is 2nd against the run but 20th against the pass. Vegas has this game as the highest game total for the entirety of Week 12, at 51.5 points.

Russell Wilson Is on the road against the Washington team that is 30th against the pass. So, despite the Seahawks loving to run the football, it will likely be a day where they let Russ cook.

Washington, themselves, find a Seattle pass defense that is ranked 25th and a run defense that ranked ninth, funneling Taylor Heinicke into a solid pass situation and a potential streaming start.

Sneaky shootout potential in Cincinatti, where both the Steelers (26th) and Bengals (19th) are subpar against the pass. Joe Burrow should find greater success than his Steeler counterpart, Ben Roethlisberger, due to Burrow ranking 9th in average depth of target (ADOT) and Roethlisberger a poor 34th.