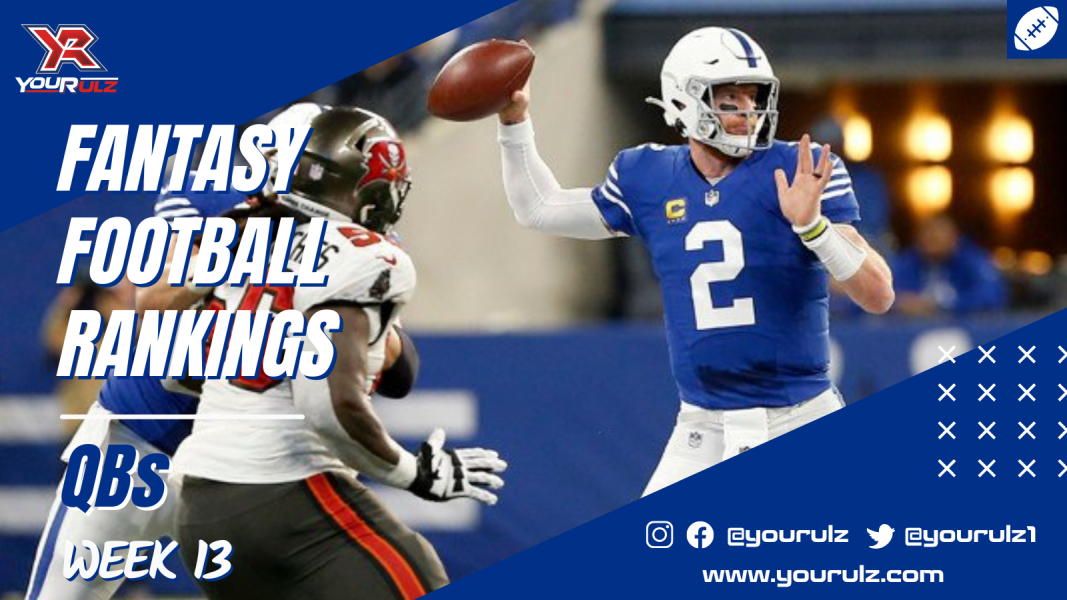 INDIANAPOLIS, IN - NOVEMBER 28: Indianapolis Colts Quarterback Carson Wentz (2) looks to make a pass down field during a NFL game between the Tampa Bay Buccaneers and the Indianapolis Colts on November 28, 2021, at Lucas Oil Stadium in Indianapolis, IN. (Photo by Jeffrey Brown/Icon Sportswire)

Jalen Hurts takes the top spot this week against the Jets defense that is dead last in defense this season. With the Eagles running attack still third in the league this year, and Hurts being a large part of that, all the scoring should be flowing through Hurts.

One of the things to watch in matchups in December are teams playing divisional opponents for the second time, as it renders offense a little lower the second time around, when the defense has more on film to counter-act the offense. Hurts fits the description of a matchup that is outside that divisional paradigm, as does Kyler Murray, who takes on the Bears. With the Cardinals excellent defense (3rd in the league), Murray should have plenty of chances to score.

Divisional or otherwise, it’s hard to see Tom Brady not having success against the 29th ranked Atlanta Falcons. The Falcons are a bit easier to pass than run on, so Brady could see more TD passes this week than last.

Unlike last week when the Los Angeles Chargers took on the run funnel defense of the Denver Broncos, this week they find themselves in Cincinnati, who has a pass funnel defense for Justin Herbert to go against.

Taysom Hill is always a threat to run touchdowns when he is in the game, and with Alvin Kamara banged up, Hill has one less mouth to feed besides his own.

Derek Carr goes against the Washington defense that is still ranked 30th against the pass, versus seventh against the run. This is another one of those non-divisional games, and Las Vegas has the 25th ranked pass defense to this is a game that both QBs are excellent streaming options.

If there was any time for Ben Roethlisberger to turn back the clock, it is against the 24th ranked passing defense of the Baltimore Ravens. The Ravens have the fifth ranked run defense and the Steelers the 29th ranked run blocking unit, so passing should be on Big Ben’s agenda this week.

Carson Wentz is coming off a 306 yard, 3 TD effort against the Bucs.  With more teams selling out to stop Jonathan Taylor, Wentz may be forced to pass more for the remainder of the season.