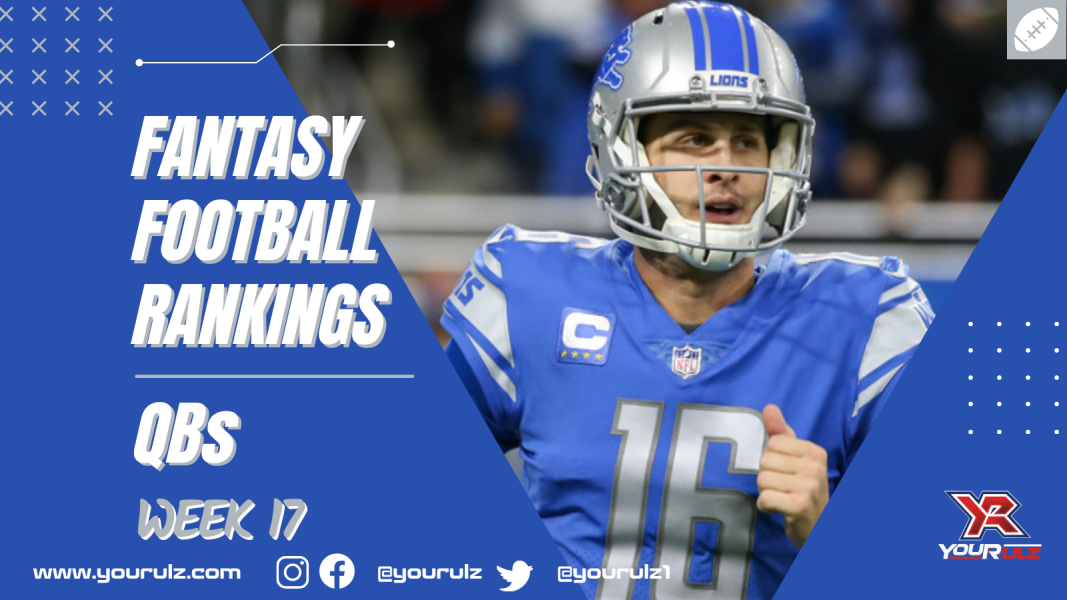 DETROIT, MI - DECEMBER 19: Detroit Lions quarterback Jared Goff (16) runs to the sideline after throwing a touchdown pass during a regular season NFL football game between the Arizona Cardinals and the Detroit Lions on December 19, 2021 at Ford Field in Detroit, Michigan. (Photo by Scott W. Grau/Icon Sportswire)

Josh Allen is back on top after drawing the 29th ranked passing defense of the Atlanta Falcons. Allen gets to play at home and take advantage of a Falcons defense that struggles to defend the pass against every part of the field.

Patrick Mahomes and the Chiefs have gotten more friendly with the run recently, but the loss of Clyde Edwards-Helaire and the Bengals becoming somewhat of a pass-funnel defense (7th vs. Run, 22nd vs. Pass), we should see more Mahomes passing in Week 17.

Joe Burrow just boat-raced the Ravens for over 500 yards and the Bengals are the 22nd ranked pass offense in the league this year.  Now here comes Matthew Stafford and the Los Angeles Rams offense, who is fifth ranked and ready to roll. The Ravens are 30th ranked against the pass now, slipping further every week as they deal with injuries and unavailability versus 6th ranked against the run, giving Stafford even more reason to score through the air.

Davis Mills may look very surprising as a QB2 this week, but the game flow and matchup favor a pass-happy week from Houston. The San Francisco 49ers are second best against the run, but only 20th against the pass. Mills has shown he can have some relevant passing games this season, having four games over 300 yards. Given the double digit point spread against the Texans this week, they will likely be playing from behind most of the game.

Jared Goff is another surprising potential streamer or QB2 this week. Goff heads up against a Seattle Seahawks defense that is ninth against the run but an incredible vulnerable 28th against the pass. The Lions are a seven point underdog in Seattle, so there should be enough reason to force the Lions into a pass heavy mode in the second half.

Mac Jones could be sneaky this week, as his New England Patriots host the woeful Jacksonville Jaguars. However, as bad as the Jags have been, they’ve been alright against the run this season, ranking 16th in the league. Their pass defense, however, has been brutal, ranking 31st overall. Given the Patriots' tendency to exploit the advantages, Mac could have some scoring throws this week versus leaning on the run game to grind things out.