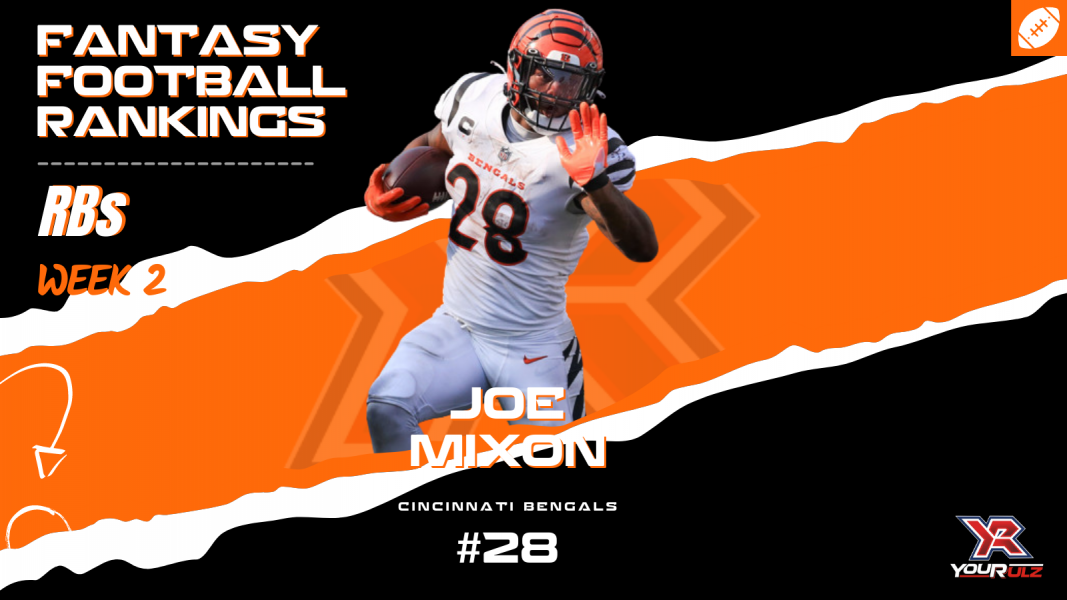 CINCINNATI, OH - SEPTEMBER 12: Cincinnati Bengals running back Joe Mixon (28) carries the ball during the game against the Minnesota Vikings and the Cincinnati Bengals on September 12, 2021, at Paul Brown Stadium in Cincinnati, OH. (Photo by Ian Johnson/Icon Sportswire)

Mixon takes on Chicago, who finished last week against Darrell Henderson giving up 4.96 adjusted line yards on the ground. Meanwhile, against the Vikings, the Bengals managed to get 4.76 adjusted line yards on the ground. When you consider the Chicago pass rush will tax the still sub-par Bengals pass protection, Joe Mixon should be in for a lot of successful work on Sunday.

Jones had the roughest of rough weeks against the Saints in Week 1. However, the Pack is back at home, and playing the Lions, who were gashed for 5.08 adjusted line yards in Week 1. The Packers are massive home favorites, despite their Week One woes, opening at a –10 pt favorite and now up to –12, making for a very favorable game flow for Jones.

Not this week: Mark Ingram, Texans

Last week, Ingram turned back the clock to his college days and racked up 26 carries in Houston’s surprisingly dominant win at home against Jacksonville. This week will be different, as the Texans trek to Cleveland to play a rushing game that was excellent last year and picked up where they left off, finishing as the top rushing unit against in Week 1, with a whopping 5.76 adjusted line yards. How does that impact Ingram? Because of Cleveland’s looming dominance on the ground, the Texans will be forced to throw to keep up, which would take away the grind away the clock game script that Ingram used in Week 1.