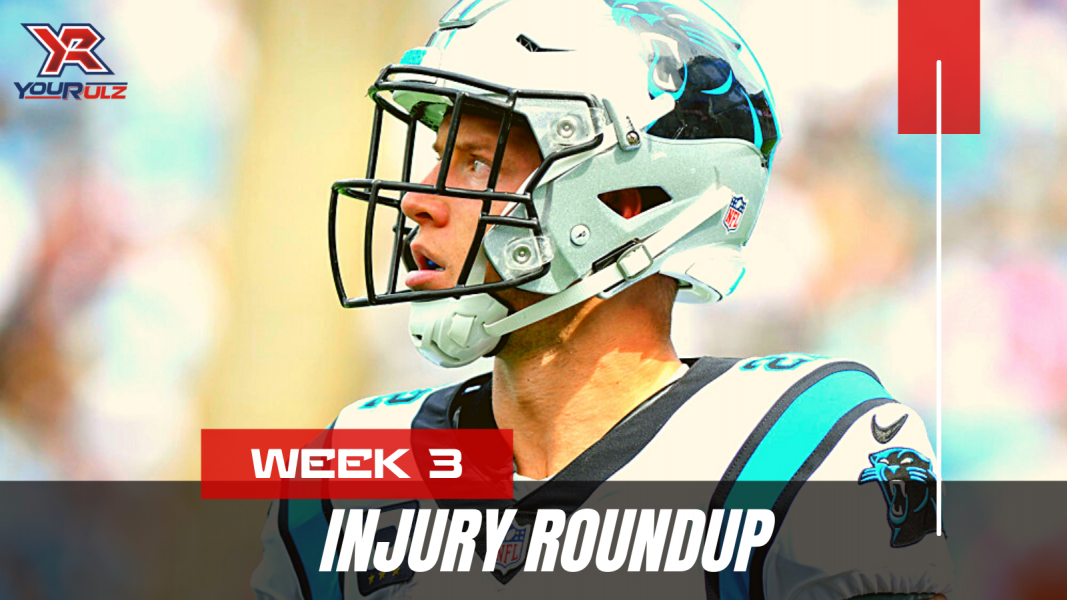 CHARLOTTE, NC - SEPTEMBER 19: Carolina Panthers running back Christian McCaffrey (22) during the game between the New Orleans Saints and the Carolina Panthers on September 19, 2021 at Bank of America Stadium in Charlotte,NC. (Photo by Dannie Walls/Icon Sportswire)

Justin Herbert, Chargers:  Herbert jammed his throwing hand in Week 3, but ended up not missing any plays and is fully expected to be fine for Week 4.

James White, Patriots:  White hurt his hip severely enough that the entire season could be in jeopardy.  Brandon Bolden should become the primary pass-catching back for now.

Giovani Bernard, Bucs:  Hurt his MCL in the final minutes of the Week 3 loss in Los Angeles.  Week 4 is currently uncertain; Leonard Fournette gets a bump if Bernard is out.

Darrell Henderson, Rams:  Missed Week 3 due to bruised ribs, leaving Sony Michel to carry the load.  May return in Week 4 but would likely be limited even if he does.

Christian McCaffrey, Panthers:  Left Week 3 with a hamstring injury and is expected to miss a few weeks.  Chuba Hubbard becomes the workhorse with McCaffrey not around.

AJ Brown, Titans:  Brown tweaked his hamstring in what could turn into a 2-4 week injury.  Chester Rogers and/or Josh Reynold could benefit in Brown’s absence.

Julio Jones, Titans:  Missed much of the second half of Week 3 in what was later determined to be a leg injury, something Jones is no stranger to.  With AJ Brown also out, the Titans may look to sign someone off the street.

JuJu Smith-Schuster, Steelers:  Left Week 3 with rib bruising, in which X-Rays were negative.  Status for Week 4 is up in the air; Chase Claypool would be the biggest beneficiary if Smith-Schuster misses time.

Sterling Shepard/Darius Slayton, Giants:  Both left Week 3 with a hamstring injuries.  Status for Week 4 is unknown.  Kadarius Toney will be forced into a bigger workload if one or both miss the game.

KJ Hamler, Broncos:  Hamler tore his ACL and is lost for the season.  Broncos will look to pick up the slack with Tim Patrick getting a large boost.

Elijah Moore, Jets:  Left Week 3 with a concussion; status for Week 4 is unknown.

Tyler Croft, Jets:  Croft left Week 3 with a chest injury, and his status is currently unknown.  Ryan Griffin would be the target benefit if Croft remains out.