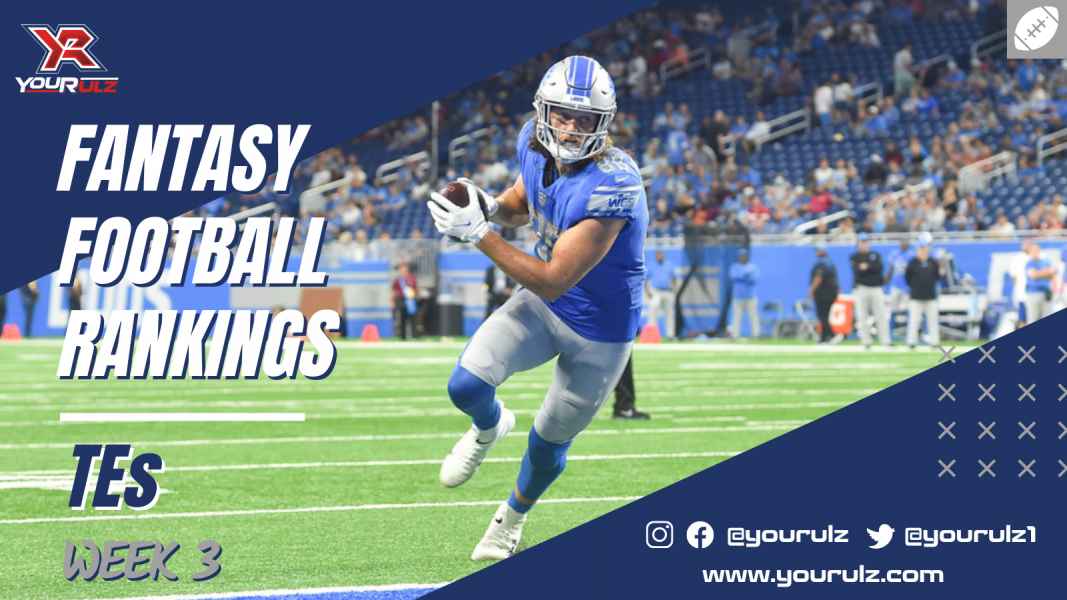 It is likely no surprise that one of the GOAT tight ends is numero uno again this week, but Travis Kelce has a sweet matchup, at home, against the Chargers, a team with enough firepower to keep the Chiefs pumping the passes Kelce’s way.

What might be a surprise is the ranking of Lions TE TJ Hockenson in the second slot. The Lions are 0-2, but have been feisty in both games, playing enough solid offense to make Week 1 and close game and to give the Packers a sweat deep into the third quarter in Week 2. Against the Ravens, the Lions will be playing behind again, most likely, and Hockenson sets up as the prime target for Jared Goff, both in the routes the big tight end is likely to run and the depleted Lions’ wide receiver corps. Hockenson has double digit targets-per-game so far, and his average should probably rise after this game.

Jon Gruden’s offenses usually scheme very well. This week, with Josh Jacobs out against and QB Derek Carr likely to have to throw quite a bit, by design, Darren Waller is a strong TE3 this week.

George Kittle has the draft pedigree and highest of ceilings, Mark Andrews the solid floor and chemistry with his QB, and Rob Gronkowski the ultimate of love connections with his QB, registering 2-TDs in both Weeks 1 and 2. But Kyle Pitts is the pick for TE4 because the Falcons should be even more target-concentrated this week with WR Russell Gage out and Atlanta has already shown a strong willingness to move Pitts around to get the targets.

Don’t forget Jared Cook this week in the Chargers/Chiefs game. Cook is just the kind of pass catcher Chargers QB Justin Herbert is going to need to stay dynamic enough to stay with the home Chiefs this week.