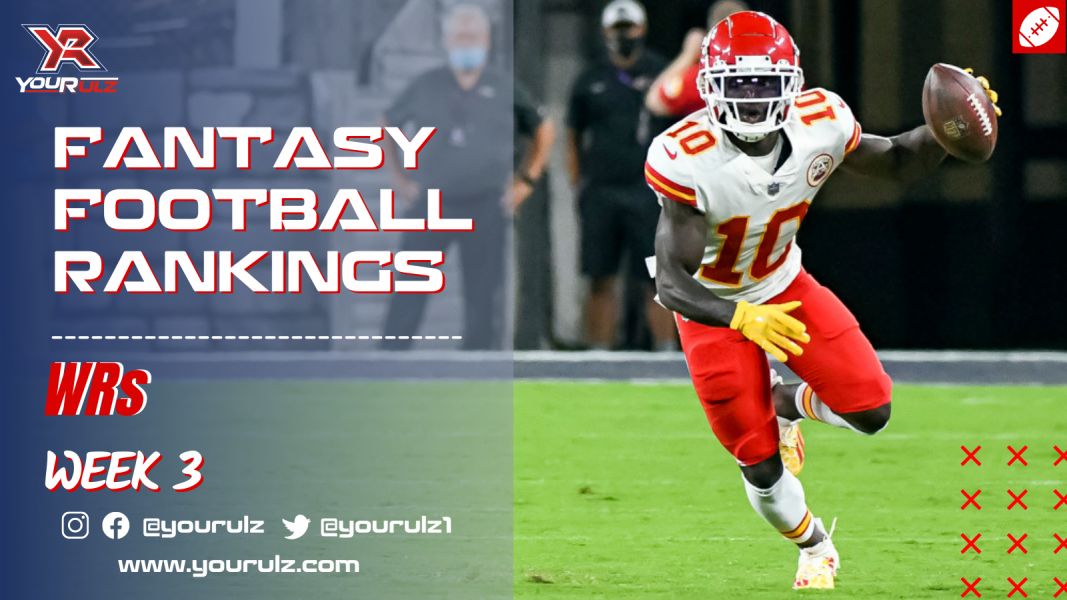 The game environment of the Chiefs and Chargers has the chance to be the biggest of the week. So why not have dynamic Chief pass catcher Tyreek Hill #1? The presence of Travis Kelce, especially around the scoring zone, versus the dominance of Devante Adams versus the other Packers pass catchers gives the Green Bay wideout the slight nod here.

Seattle and Minnesota has a game total of nearly 56 points, meaning there is anticipating to be a bunch of possessions that end in a score. Seattle does like to run, but do it in order to set up the long, impactful, pass plays. We have seen Tyler Lockett already get the benefit of it this season, and both he and teammate DK Metcalf are top plays this week.

On the other side of that game, the Vikings are likely to be without workhorse RB Dalvin Cook, hence the rising game total. Justin Jefferson and Adam Thielen are both excellent plays this week in what looks to be a shootout.

If Tyreek Hill and Travis Kelce are such threats this week, and Patrick Mahomes is in line for a big game, then it stands to reason that the Chargers will have to be scoring to keep the heat on, as expected. Mike Williams has stepped into the Michael Thomas role in OC Joe Lombardi's new offense and has a solid floor, if even a lower ceiling than we have expected in seasons past. Keenan Allen is still getting gobs of targets as well and both are solid plays this week.

The other big game environment is the Tampa Bay at Los Angeles Rams game. Both defenses are tough to run against, and both offenses will be likely to throw-throw-throw this week. The Buccaneers main pass catchers, Mike Evans and Chris Godwin, will likely soak up some additional targets this week due to this game environment but also the absence of Antonio Brown. For the Rams, Cooper Kupp, once again, sets up as a prime target against the soft spot in the Bucs defense, the slot. Robert Woods should also be solid this week as he, too, runs quite a few routes out of the slot and may grab some additional rushes this week with RB Darrell Henderson’s rib injury.

Marvin Jones, Jr may seem like a surprise entry here, but with the Jags passing so much this season (highest situation-nuetral passing rate in the league, Tom Brady’s Bucs are second), Jones leads the team in targets. This game against the fast paced Cardinals should provide many more pass attempts for the Jags, and Jones is a high volume rank here.