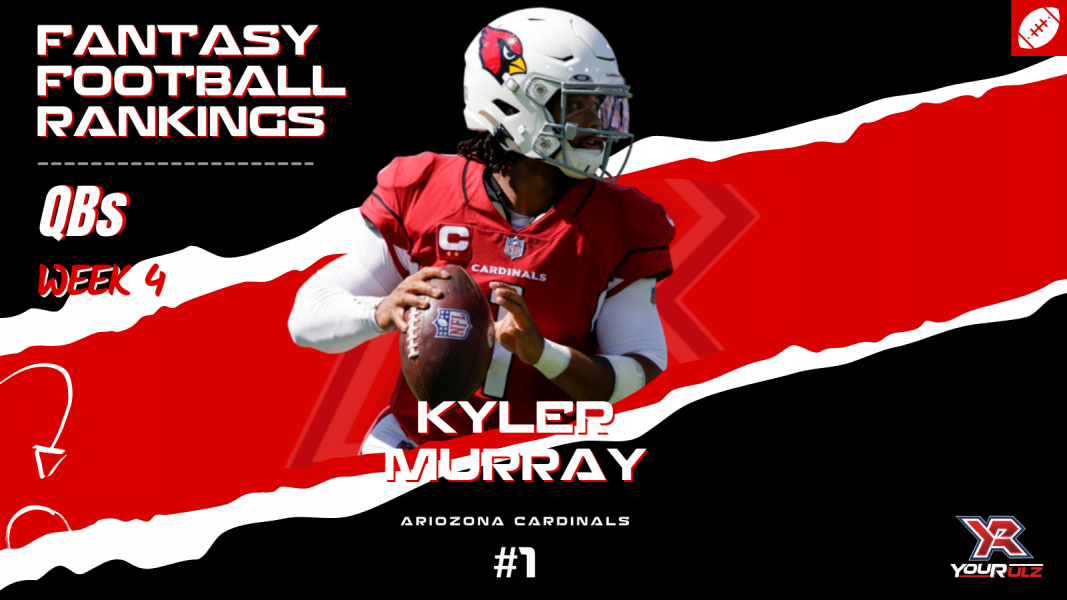 JACKSONVILLE, FL - SEPTEMBER 26: Arizona Cardinals quarterback Kyler Murray (1) during the game between the Arizona Cardinals and the Jaguars on September 26, 2021 at TIAA Bank Field in Jacksonville, Fl. (Photo by David Rosenblum/Icon Sportswire)

On paper, the Kansas City / Philadelphia Eagles game does not look like it would be maybe the top game environment for fantasy.  However, we have a situation where the Chiefs are coming off a home loss, hitting the road, and looking to prove themselves against an overmatched yet talented Eagles offense. Bettors agree, lifting this game total which starting with an opening 50-point game total and the Chiefs as an eight-point favorite, to a tasty 54.5 total and the Eagles now a seven-point underdog. This means that the expectation is that the Chiefs will score, a lot, and the Eagles have what it takes to keep the game close and the fantasy goodness flowing. All of this to say: Patrick Mahomes is the top QB and Jalen Hurts pulls in at 11.

Another sneaky place for passing could be the Vikings hosting the Browns. Kirk Cousins has already shown passing prowess and now Baker Mayfield, despite a fairly low passing attempt total per week, should have an efficiently good game in a down week overall for QB play.

Pittsburgh has a rough run defense, forcing teams to try to beat them through the air with deeper coverage. This should allow Aaron Rodgers to play to his favorite target, Devante Adams, and move the ball efficiently.

The weirdest potential shootout might end up in Atlanta, where the “what are you doing” Atlanta Falcons have to eventually figure out how to better use both Calvin Ridley and Kyle Pitts. If they can’t against the soft-tissue Washington pass defense, it may be time to say goodbye to Matt Ryan forever.

Finally, the big game this week is likely to be in Los Angeles, where the Arizona Cardinals and all of their east-west passing efficiency, led by Kyler Murray, take on the frisky Rams, who have come alive with Matthew Stafford running things behind center. This is the highest game total of the week, and will be driven by the passing games, making faster scores more possible, more snaps, and more fantasy goodness. Both Murray and Stafford are high on the list again this week.