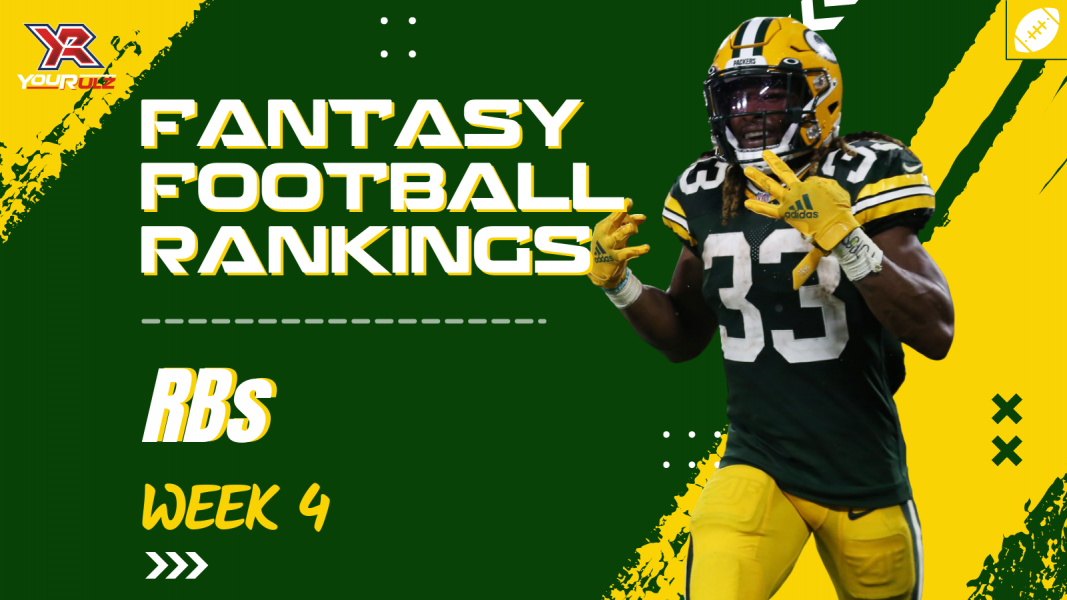 GREEN BAY, WI - SEPTEMBER 20: Green Bay Packers running back Aaron Jones (33) flashes his number during a game between the Green Bay Packers and the Detroit Lions at Lambeau Field on September 20, 2021 in Green Bay, WI. (Photo by Larry Radloff/Icon Sportswire)

Another tough week for running backs, so the rankings reflect the following: 1. Opportunity 2. Game Environment 3. Potential for ceiling game.

Easy enough to start with Derrick Henry, who is as close to a 1980’s backfield workhorse as there is in the league right now. The only inhibitor for Henry having a huge game might be if he is effective enough early on and allows the Titans to blend in some backup carries.  If the Jets somehow keep this close early, or limit Henry’s effectiveness, then it may lead to more Henry carries overall in the game.

Looking at how I looked at the rankings this week, it was clear Jonathan Taylor was finally going to at least have the potential for a ceiling game for himself this week. This game flow will likely see a very conservative game plan for both teams, as the Colts have a hobbled QB and the Dolphins are already on their own backup this week. This will allow Taylor to get the majority share of the carries action and post a good score.

Keep an eye on Pittsburgh’s injury report, because if Juju Smith-Schuster and Chase Claypool miss, then this #3 ranking for Najee Harris will make more sense. We saw Harris targeted an obscene 18 times in Week 3 and if those two WR’s are indeed out, Harris will be asked to carry a heavy load again in Week 4.

Chuba Hubbard saw the majority of touches after Christian McCaffrey went down and, while Royce Freeman is still a danger to vulture goal-line work, Hubbard looked dynamic enough to assume he will be used much in the same way Mike Davis was used last season in McCaffrey’s absence.

Tony Pollard continues to grab my attention every week. If anything should happen to Ezekiel Elliott, Pollard becomes a weekly Top 10 back; his advanced metrics have been league leading so far. Elliott played fine in Week 3, but Pollard continues to excel and create more dynamic plays. In a potentially sneaky scoring game this week (hosting the Panthers), Pollard would be an intriguing RB3.

Kareem Hunt saw a solid workload in Week 3 and, along with Nick Chubb, has a great matchup this week against the Vikings. If you took Hunt with the idea that he would excel if something happened to Chubb, I think you could clearly play them both in most matchups this season.

Two guys who just need their teams to commit to them and they could have top scoring weeks this week are Washington’s Antonio Gibson and Philadelphia’s Miles Sanders. Both matchups this week (Gibson at ATL, Sanders vs. PHI) are potential top scoring game environments and they are the top talents to have a multiple-TD day.