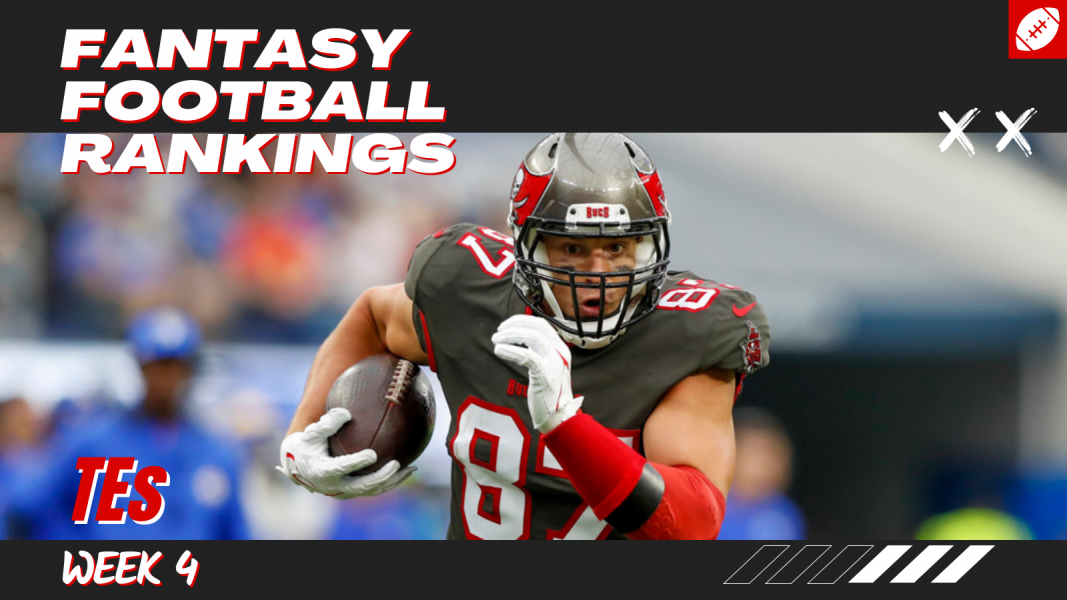 INGLEWOOD, CA - SEPTEMBER 26: Tampa Bay Buccaneers tight end Rob Gronkowski (87) catches the ball for a gain during a game between the Tampa Bay Buccaneers and the Los Angeles Rams at SoFi Stadium on September 26, 2021 in Inglewood, California. (Photo by Jordon Kelly/Icon Sportswire)

Another week, another Travis Kelce top ranking. The matchups continue to be pristine, and the Eagles play defense to try to eliminate the deep ball, bringing more targets underneath and to Kelce.

Watch the injury report for George Kittle, as this matchup and the desire for the 49ers to control the ball makes Kittle a solid play this week.

TJ Hockenson let you down last week, but should still get good run as the Lions top pass catcher as the team caught a lot of heat after the Week 3 game plan that only saw TJ get two targets despite the strong matchup.

Kyle Pitts, on a pivotal series in the red zone was wide open twice and Matt Ryan threw the ball miles over his head both times. He is open. The talent is on film. This is a great matchup for Ryan and Pitts to get on the same page, so I am going to ride it. However, if Ryan blows this game, I will have to drop Pitts down until a new QB emerges in Atlanta.

Hard to turn away Rob Gronkowski, back in New England, with Tom Brady, in a prime-time game. However, Antonio Brown is back and ready to re-assume his target share, and Curtis Godwin and Mike Evans are ready to roll as well against a Patriots defense that forces team to run more than pass.

Logan Thomas plays every snap and has a great matchup against the rudderless Falcons – do not overthink things here.

Mike Gesicki was running routes as a WR last week and the Dolphins started to go more up tempo and out of the shotgun with Jacoby Brissett, meaning you are going to roster a WR in a TE space in a good matchup for that role.