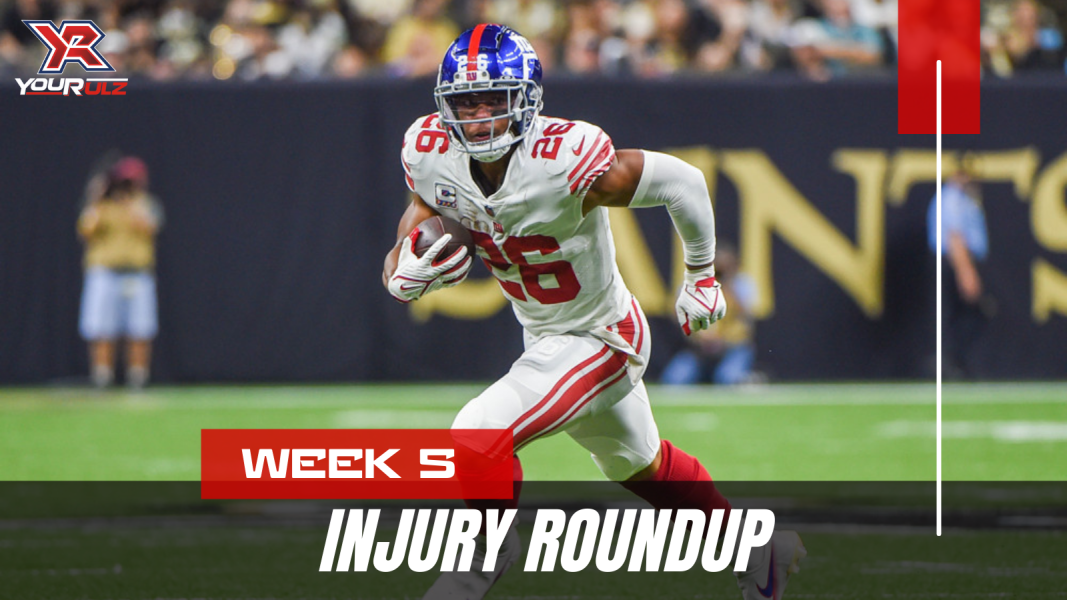 Russell Wilson, Seahawks:  Wilson suffered a finger injury on his throwing hand which required surgery, keeping him out for the next 4 to 6 weeks.  Geno Smith will be handling QB duties in the meantime.

Daniel Jones, Giants:  Left with a concussion.  Has not been formally cleared to play, but will likely be behind center in Week 6.  Mike Glennon would fill in if Jones remains out.

Clyde Edwards-Helaire, Chiefs:  Suffered a knee injury and was placed on IR, so he’ll be out at least six weeks.  Darrel Williams will be the biggest beneficiary.

Saquon Barkley, Giants:  Left with a low ankle sprain.  While not as severe as originally feared, he will still likely miss Week 6.  Devontae Booker will carry the load in his place.

Damien Harris, Patriots:  Left with a rib injury, but nothing serious was revealed and he’ll likely be ready for Week 6.

Tyreek Hill, Chiefs:  Suffered a quad injury and is questionable for Week 6.  All KC receivers would get a bump in his absence.

Kenny Golladay, Giants:  Left with a knee injury, and is not expected to play in Week 6.  Both Darius Slayton and Sterling Shepard are expected to return this week, so they will pick up the slack.

JuJu Smith-Schuster, Steelers:  Left with a shoulder injury and will receive season-ending surgery as a result.  It’s a bigger workload for Chase Claypool and Diontae Johnson from here out.

Maxx Williams, Cardinals:  Suffered what is believed to be a season-ending knee injury.  Darrell Daniels will be the #1 TE for Arizona the rest of the season.

Dallas Goedert, Eagles:  Tested positive for COVID – expected to miss Week 6.  Zach Ertz gets a bump with this news.