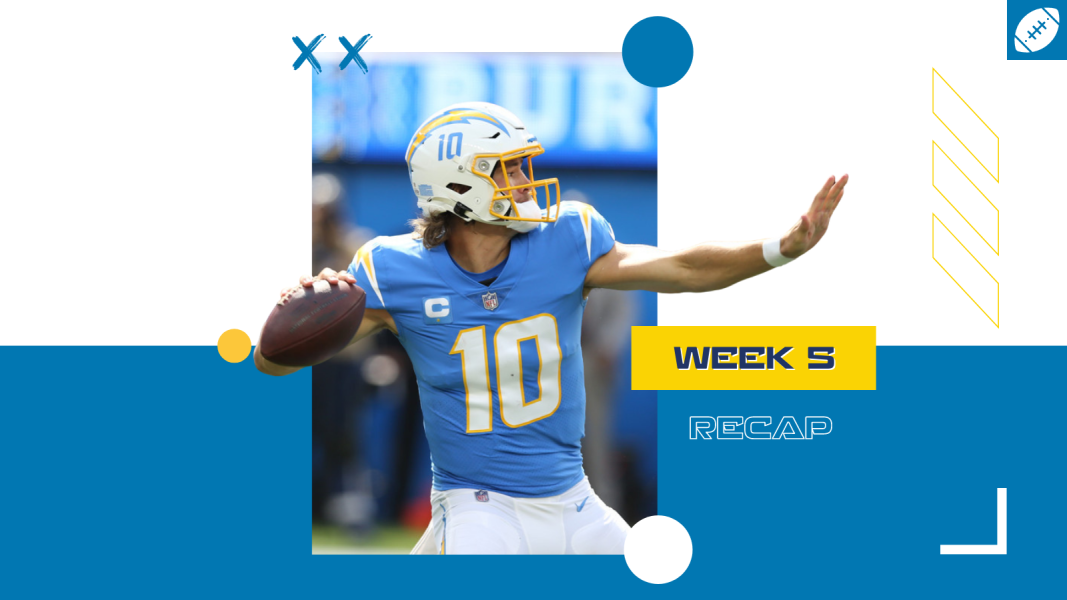 Jameis Winston, NO vs. WAS

Two of Jason’s projected top 5 ended up in the actual top 5, so he didn’t do too bad there.  As for his other three, Mahomes finished #14, Murray finished #22, and Jalen Hurts a respectable #8.

Surprising week 5 finishers – NONE were in Jason Walker’s projected Top 20:

Notes:  Daniel Jones, projected #16, left the game early in Dallas with a concussion.  With this being a late game, available options would have been limited, but making a switch to Baker Mayfield (305 yards, 2 TD’s) in a shootout vs. the Chargers would have earned you a pile of points.

Jason landed Derrick Henry here.  As for his others, McCaffrey and Cook did not play, Barkley left with an ankle injury, and Elliott finished a solid #8.

Notes:  The importance of handcuffs for injuries with RB’s can be extremely critical as was shown in Week 5.  Injury replacements that shined included #6 Alexander Mattison (for Cook), #15 Devontae Booker (for Barkley), and #16 Chuba Hubbard (for McCaffrey).  While Mattison and Hubbard started, Booker came in early for an injured Barkley and put up terrific numbers (2 TD’s); this is where the YouRulz in-game substitution feature can save your week.

Jason was right on the money on Davante Adams.  As for his others, Hill finished #26, Diggs finished #48, Jefferson finished #17, and Samuel finished #21.

#11 Marquez Calloway, NO vs WAS

Notes:  Ju Ju Smith-Schuster (PIT) was carted off early and would have made a great substitution play for teammate Chase Claypool, who finished strong at #12.

Jason got Kyle Pitts on his list, who had the best day of his young career so far.  As for his others, Kelce  finished #6, Kittle did not play, Waller finished #15, and Hockenson finished a very disappointing #34.

Notes:  Logan Thomas was out for WAS, but Ricky Seals-Jones filled in respectably at #14.