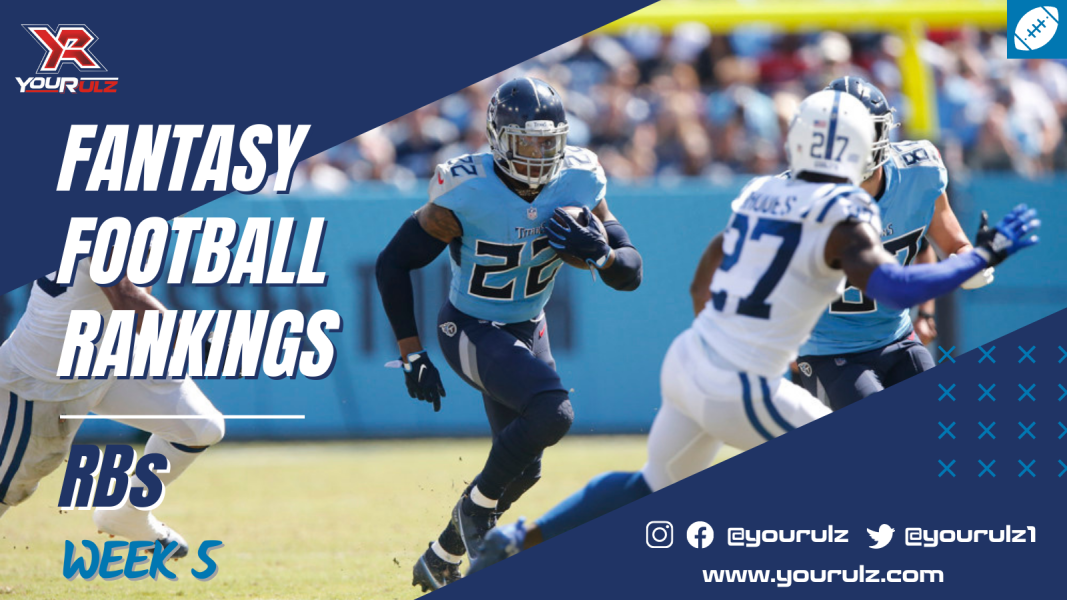 NASHVILLE, TN - SEPTEMBER 26: Tennessee Titans Running Back Derrick Henry (22) looks to cut up field during and NFL Game between the Indianapolis Colts and Tennessee Titans on September 26, 2021 at Nissan Stadium in Nashville, TN. (Photo by Jeffrey Brown/Icon Sportswire)

It is a thin week overall, with few games carrying a high game total in Vegas, indicating a lack of intriguing matchups that would drive fantasy scores sky-high.  And it is another tough week for running backs, so the rankings reflect the following:  1. Opportunity 2. Game Environment 3. Potential for ceiling game.

Easy enough to start with Derrick Henry, who is as close to an 80s backfield workhorse as there is in the league right now. Wait, didn’t this space say the exact same thing last week? Yes. Yes, it did. And why not repeat the sentiment, with Henry showing no signs of slowing down and adding some pass catching into the fray this week. Despite Jacksonville’s porous pass defense (dead last in DVOA, per Football Outsiders), Tennessee is still going to have a steady diet of Henry to feed the Jaguars, and the Titans defense is bad enough to let Trevor Lawrence and company score and keep Henry in the game.

As of this writing, it looks like Christian McCaffrey will play in Week 5, carrying the load against an Eagles team that is keen to let their opponents catch the short stuff and dare them to make a play. Philadelphia has been uncharacteristically bad against the run, too, meaning that only Derrick Henry’s current awesomeness is the only thing keep CMC from the top spot.

Ezekiel Elliott may look like a surprise back in the top 5 in the rankings, but his recent usage has gone up, especially around the goal line, and the Cowboys have a good matchup against the defensively woeful Giants, in Dallas. Additionally, the rest of the running backs at this level all have significant game environment warts that lifts Elliott’s relatively clean game flow this week above the rest.

And what would be those warts for the likes of Alvin Kamara, Austin Ekeler, Najee Harris, Aaron Jones, and Nick Chubb? Well, Kamara has been made a between the 20’s grinder so far this year, with even his passing game impact limited by the Saints’ unwillingness to have Jameis Winston throw even 25 times. Also, Taysom Hill has continued his red zone prowess, to further limit the talented Kamara.

Austin Ekeler has a deep commitment from the Chargers this season, but a tough matchup against the top rushing defense in the league in the Cleveland Browns.  In the same game, Chubb has been severely limited in game flow, stuck at 18 touches a game while teammate Kareem Hunt has averaged a close 14 per game.

Aaron Jones also gets the kid glove treatment, but his wart is that the Bengals are very susceptible to getting beat in man-defense, and the Packers have one of the best man-defense receivers in Devante Adams to get a lot of targets in this game. The Bengals are also the second-best run defense in the league right now, meaning Aaron Rodgers will have the green light to throw, throw, throw.

Finally, Najee Harris, as expected, has been a touches beast, averaging over 20 a game, and fourth most overall. However, as also expected, the Steelers run blocking has been atrocious, ranking dead last in the league. Their matchup this week against the seventh-ranked defense of the Denver Broncos means a lot of largely ineffective touches.