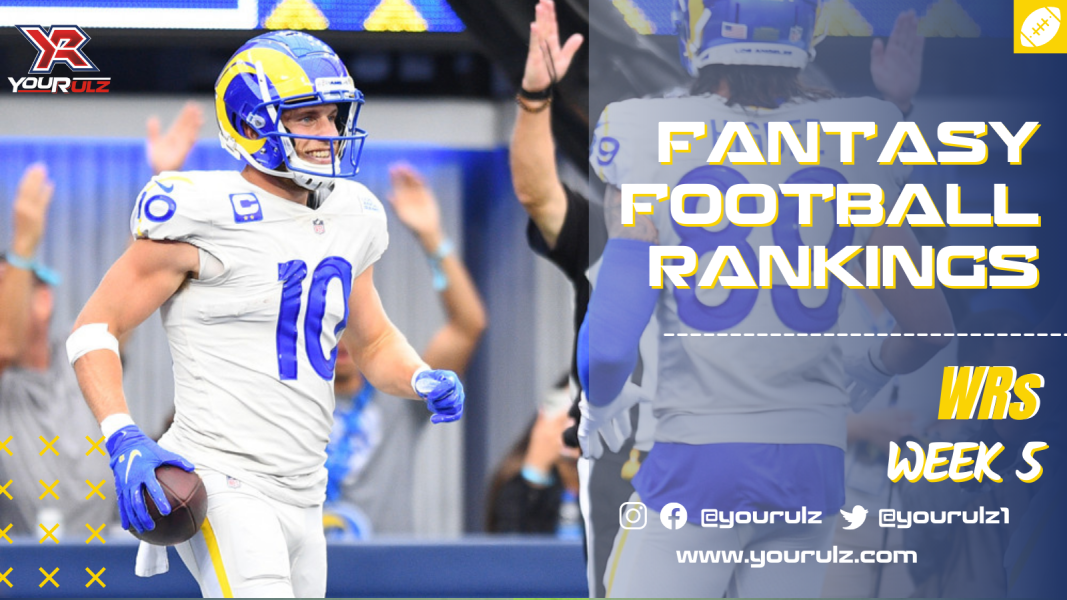 It is a thin week overall, with few games carrying a high game total in Vegas, indicating a lack of intriguing matchups that would drive fantasy scores sky high.

Davante Adams is once again our top WR. But why this week? The Bengals are very susceptible to getting beat in man-defense, and the Packers have one of the best man-defense receivers in Mr. Adams, meaning he should get a lot of targets in this game. The Bengals are also the second-best run defense in the league right now, meaning Aaron Rodgers will have the green light to throw, throw, throw.

Otherwise, it is a dead heat between Stefon Diggs and Tyreek Hill for the top spot. Hill showed off his elite spike score last week and that can happen every week, especially against good teams where the Chiefs must lean on their playmakers to beat the best. This week certainly qualifies.

That is what gives Hill the edge over Diggs, as the Kansas City defense is so bad (last in the league) that while Diggs can go off, so can Emmanuel Sanders or Cole Beasley. Diggs has volume on his side, landing in the top five for targets, but has not been as effective, yet, but the Chiefs give him the best chance to turn that target volume into a big day.

Deebo Samuel is ranked this high based on game environment (having to keep up with the Cardinals) and the assumption that Jimmy Garoppolo is going to start for San Francisco and not the very passing-game limited Trey Lance.  Samuel has been targeted more than Tyreek Hill, DK Metcalf, Terry McLaurin and Justin Jefferson, tying with Keenan Allen, DJ Moore, and Calvin Ridley coming into week 5.

With the Browns severely limiting the running game (#1 in the NFL), it will largely fall to Kennan Allen and Mike Williams to move the chains in a high-for-this-week 47.5 point game total.

Miami and Tampa have the makings for a high passing attempt extravaganza. While it is possible that Tampa adjusts to Miami’s defensive weaknesses and runs the ball more, Tom Brady and all those weapons won’t take the week off and the Dolphins have passed often with Jacoby Brissett at the helm, landing as fourth highest passing play percentage over the last three weeks.

With Joe Mixon expected to miss the game against the 23rd ranked defense of the Packers, it will likely fall on Joe Burrow and his receivers to pick up the considerable slack for Mixon. And since it looks like it will be a passing game from the Packers and it figures to be successful, you can see the Bengals passing attack needing to be humming to keep up.

A.J. Brown is healthy and Julio Jones is not, meaning that it should be Brown who is in line to greatly benefit from the Jaguars potentially overplaying Derrick Henry and be the target for a highly efficient passing effort from Ryan Tannehill.