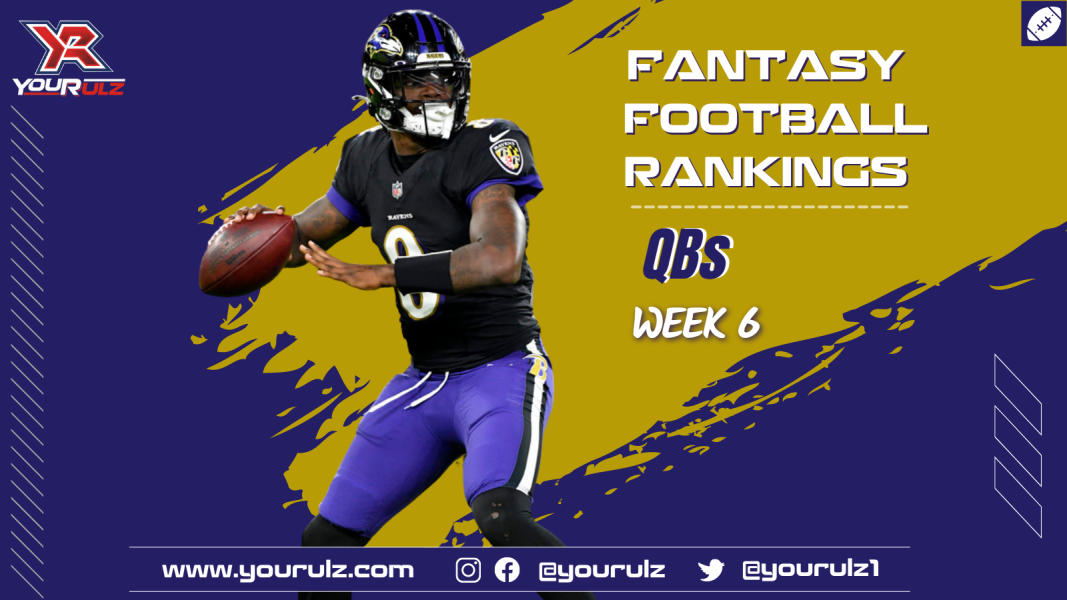 Tough week for QBs this week, in that there are few matchups which really beg the mid-tier of QBs to throw, meaning that everyone from Goff at 17 through Wentz at 22 are about the same in terms of teams that may want to run the ball to win and have a matchup that allows them to do so.

Of course, this doesn’t apply to Patrick Mahomes, who gets an easier matchup than he has had by taking on the Washington Football Team, ranked ninth in defense-adjusted value over average (DVOA) by Football Outsiders against the run, but 29th against the pass, including brutal numbers against deep passes. Washington may try to play the two-high safeties game that teams have been peppering the Chiefs with, but that stats show they are bad at it.

Thursday Night, Tom Brady and Jalen Hurts should matchup to pass a lot, as the Bucs are impossible to run on this season and these two teams are in the top 10 in passing play percentage. Vegas agrees, making this game a top three game total for the week.

Lamar Jackson, last Monday night, showed why you cannot bench him. Even after a low scoring first half, Jackson still rocked the scoreboard and led all QBs by the time Week 5 ended. Jackson will have to carry the Ravens against the Chargers as well, and don’t get an itchy substitution finger even if Jackson struggles early. Nobody puts up points faster when he is rolling.

Ryan Tannehill has the best running back in the league behind him in Derrick Henry, but playing against the Buffalo Bills has not been conducive to running the football. Buffalo faces the fifth highest pass play percentage in the league this season, due to their strong offense and being ahead in games, meaning we will likely see the Titans try to run Henry until the Bills get ahead, and then Tannehill will have to throw.

Taylor Heinicke may surprise you here, but the game environment against Kansas City, where they will likely be down quick, portends to the pass in this game. Heinicke has been a solid QB so far this season, ranking 14th in DVOA and DYAR (defensive adjusted yards above replacement).