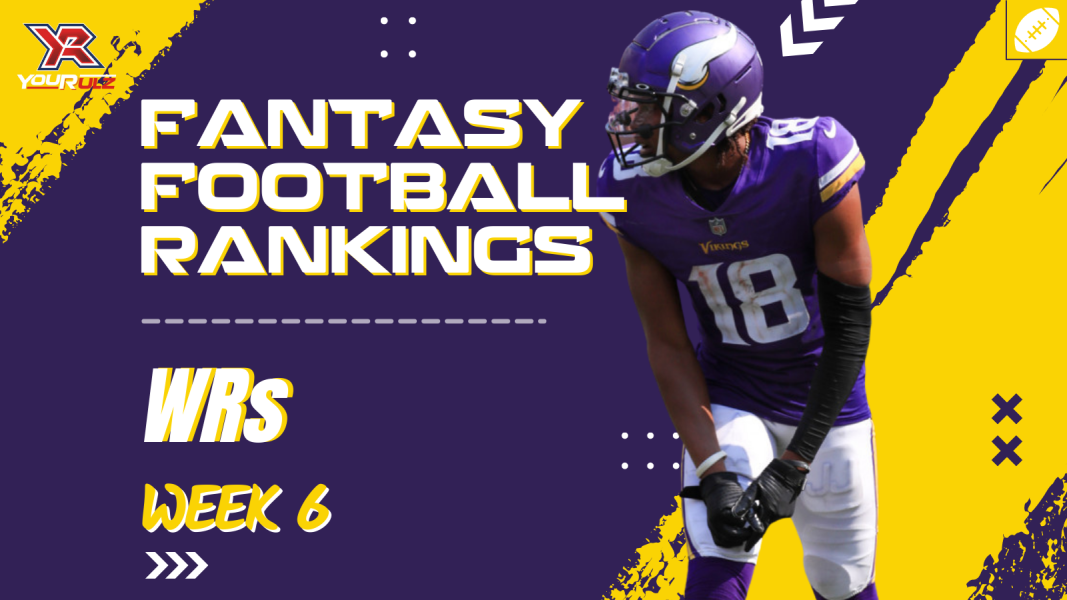 CINCINNATI, OH - SEPTEMBER 12: Minnesota Vikings wide receiver Justin Jefferson (18) lines up for a play during the game against the Minnesota Vikings and the Cincinnati Bengals on September 12, 2021, at Paul Brown Stadium in Cincinnati, OH. (Photo by Ian Johnson/Icon Sportswire)

Who could knock Devante Adams off the top spot in the WR rankings? Only the TyFreek himself, Tyreek Hill. The Chiefs forecast to throw against the pass funnel defense of Washington, WFT gets beat deep often, and the Washington offense should be able to score on the Chiefs to keep the pressure on for the Chiefs to score even more.

Meanwhile, Adams finds himself in a more negative game environment, where the Chicago Bears should be able to run the ball against the Packers and keep Adams out of a shootout. He will still win more than an average share, but the game flow may end up working against having a top week type of workload. Vegas seems to agree, as the opening line of 47 total points has already worked its way down to 44.

Justin Jefferson has shown he can score against anyone this season, and is Football Outsiders’ #1 wide receiver in defense-adjusted yards over average (DYAR) this season. His matchup against the Panthers is not elite, and the game environment is neutral, at best, but this is an example of never sitting a top WR in any matchup. Elite.

Great passing environment for the Rams this week, against the Giants. The Giants are 30th against opposing slot receivers, a place where both Cooper Kupp and Robert Woods share a lot of snaps. The Rams have also shown they are pouring on the points this season, and Vegas has them at nearly 30 points for this week.

Seattle is without Russell Wilson this week, but the matchup against the Steelers should still mean plenty of passing. Why is that when you figure the Seahawks will try to run to shorten the game and protect Geno Smith? Because the Steelers should have an easy time throwing the ball to Dionte Johnson, Najee Harris, and Chase Claypool, meaning Seattle will not be able to play conservative too long. The Steelers struggle against opposing slot receivers, so Tyler Lockett should be the primary target for Geno Smith.

Ja’Marr Chase has emerged as the Alpha for the Cincinnati Bengals, and he ranks seventh in DYAR and sixth in defense-adjusted value over average (DVOA) among wide receivers as well. The Bengals will have success on the ground against the woeful defensive Detroit Lions, but Chase will have an easy time as well.