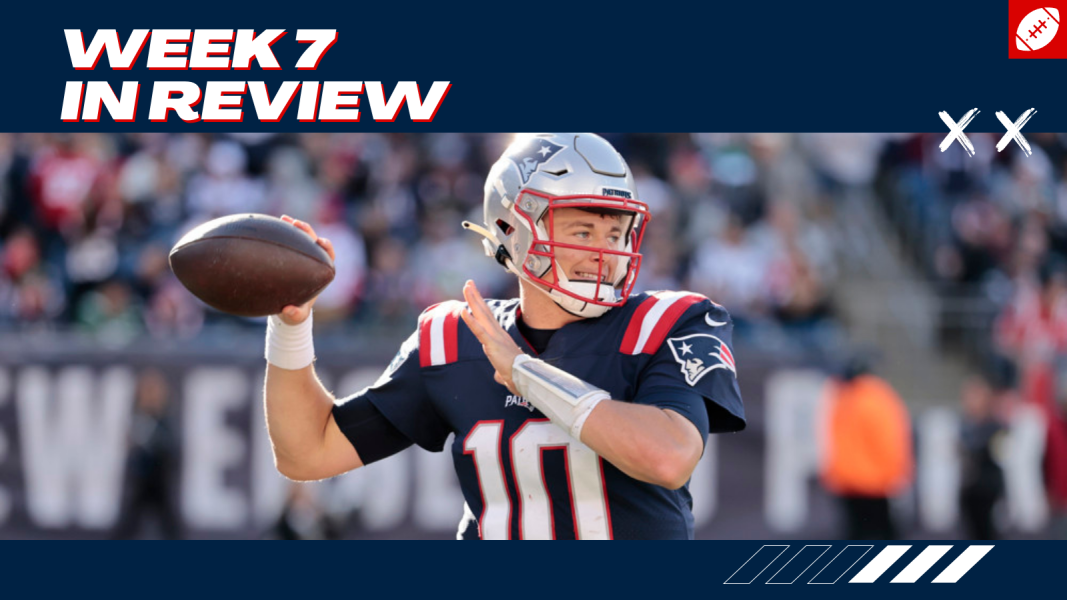 FOXBOROUGH, MA - OCTOBER 24: New England Patriots quarterback Mac Jones (10) rears back to pass during a game between the New England Patriots and the New York Jets on October 24, 2021, at Gillette Stadium in Foxborough, Massachusetts. (Photo by Fred Kfoury III/Icon Sportswire)

With Week 7 of the 2021 NFL season officially in the rear, I'm speechless.  Why, you ask?  Because I pride myself on being “in the know” when it comes to professional football, and this 2021 season has shown that maybe I'm not as knowledgeable as I perceive myself to be.  Then again, I never said I was a soothsayer, so maybe I'm being hard on myself as it’s only the midway mark of the NFL's first 17 game season.  But come on, Week 7!  The Giants upset the Panthers, the Titans annihilate the Chiefs, and the Colts manhandle the 49ers - and this was just a fraction of the Week 7 action.

What did we learn about each of the 32 teams after another week of matchups? As Week 8 draws near, lets point out what can be taken from each individual team performance and try and get a gage of where these teams are at and where they are going as of Week 7.

They were already one of the NFL’s best, and the acquisition of TE Zach Ertz was brilliant.  Ertz was in good form and he played well in his Arizona debut, looking really comfortable with QB Kyler Murray right off the bat.  It’s yet another weapon to add to Murray’s arsenal. Both of these fellas are what you would call fantasy football HOT right now.

He started the season on a quieter note, but rookie TE Kyle Pitts is the real deal.  Matt Ryan had a ball throwing his way against the Dolphins, including in crunch time to set up a last-second win.  Expect this to continue to be a trend going forward – Pitts is too talented to ignore.

They will still be in the hunt as long as Lamar Jackson is playing, but they’ve probably underestimated the shakiness of their O-line, which recently lost Ronnie Stanley (again).  The line couldn't withstand Cincinnati's front in a key AFC North loss, and it going to remain an issue.

No disrespect to the Bengals, who are now officially the No. 1 seed (!) in the AFC, but with Baltimore and Kansas City going down Sunday, Buffalo looks like the surest bet to make a Super Bowl run in the AFC.

Sam Darnold might already be on the clock as Carolinas long-term QB.  After a solid 3-0 start, his stock has dwindled after he was benched this past Sunday.  The rumor mill has linked Carolina to Deshaun Watson, which to me seems like a move out of desperation.

Justin Fields and Chicago’s offense looked horrible against the Bucs defense, but that's nothing new for Matt Nagy's squad.  However, Chicago RB Khalil Herbert has come into his own, a true playmaker that looked explosive running the ball.  Kudos to any fantasy owners who may have stashed him.

The Bengals are playoff contenders, that alone should be a huge win for their battered fans.  Between Joe Burrow, Ja'Marr Chase and an underrated defense, they've stumbled onto a 5-2 record and seem too talented for it to be yet another mirage.

Playoffs?  Cleveland’s postseason hopes are in trouble.  However, the Browns have plenty of time to turn things around, even with Baker Mayfield having a busted wing.  They have to get focused, as the Bengals and Ravens are both looking like locks to make s mid season run.

The NFC East is theirs to lose. Yes, the Giants upset Carolina, but they're still 2-5 along with the Eagles and Washington Football Team.  Throw away the conference and all these teams have major issues across the board.

Vic Fangio may be on thin ice.  That 3-0 start was truly a mirage, and neither Fangio's offense nor defense looks very inspired right now. Things may get worse before they get better here.

The Lions roster is pretty weak, which explains their 0-7 record.  Coach Dan Campbell just can't get a win despite the Lions showing up to fight every week.

Even with all the injuries they've suffered on defense, their linebackers are stepping up in a big way, with Rashan Gary and De'Vondre Campbell both executing several big plays to put down Washington in the Packers sixth straight win.

Outside of their lowly production on the field, they're desperate to trade Deshaun Watson. Why else has there been such a sudden increase in reports surrounding the QB's availability ahead of the Nov. 2 deadline? They're ready to move on.

Carson Wentz overcame an off-target start in bad weather in San Francisco, utilizing both his arm and legs.  A physical Colts defense forced a few takeaways late to seal the win.

Well, they’re better than the Texans, but that’s not saying much.

Another day, another costly string of Patrick Mahomes mistakes.  Not even Andy Reid seems to know how to fix this.  It's certainly not all on Mahomes, who's pressing for big plays to make up for a shoddy line and awful defense, but they need No. 15 to clean it up.

We already know Derek Carr is playing great football from the pocket, but how about that front four?  Their pass rush is underrated, with both Maxx Crosby and Yannick Ngakoue doing damage against the stumbling Eagles in a statement win.

There's light at the end of the tunnel; their road to the playoffs looks crystal clear.  While the Raiders won this Sunday, the Chiefs look bad and the Broncos might as well be dead.  Whether it's a division title or wild card, it looks like smooth sailing towards the postseason for the Chargers.

We're taking Matthew Stafford for granted.  Seriously, aside from his slip up against Arizona, he's operated dominantly and with ease for Sean McVay. On Sunday, he had no problem overcoming an early hole against his old friends in Detroit.

Now 1-6 through seven games, Brian Flores coaching has now been brought into questioning.  Not because QB remains a question mark, but because his defense continually fails to impress.

A Wild Card berth is their only shot at the playoffs.  The Vikings were once within reach of the Packers, but now with Green Bay at 6-1, they have a lot of catching up to do.

Mac Jones had a big hand in the Pats' shredding of the Jets, but they should run the ball more.  Just look what happens when you feed the trio of Damien Harris, Brandon Bolden and J.J. Taylor, who rolled all over New York.

All the focus is on Jameis Winston, who didn't get a ton of help from his receivers in a big Monday night win, but their defense is making plays when it needs to. Credit Demario Davis and Malcolm Jenkins for clutch stops in the fourth against Seattle.

Patrick Graham's defense still has life, or maybe Sam Darnold and the Panthers are just that bad.  Either way, New York's "D" set the tone for their Week 7 upset, taking some of the burden off Daniel Jones and an injury-ravaged offense.

With Zach Wilson now banged up and set to miss up to a month with a knee injury, they're bound to get worse before they get better.  Jets fans, at least you can look forward to the offseason, right?

Nick Sirianni and Jalen Hurts aren't the only core pieces failing to get the job done.  Jonathan Gannon's defense is losing locker room veterans like Fletcher Cox, who's fed up with Philly’s passive approach which allows opponents to dictate the momentum and lastly the outcome of there games.

With the Browns and Chiefs banged up and struggling, the Steelers have a real shot at making noise in the Wild Card race.  However, they'll likely need three straight wins against Cleveland, Chicago and Detroit to stay alive.  I like those odds.

Whether it's Jimmy Garoppolo or Trey Lance at QB moving forward, Kyle Shanahan deserves all the heat for their struggles.  He's now 31-39 running the show for his career, and his offense has had no steady rhythm for the entire year.

When is Russell Wilson coming back? Chris Carson would help, too.  Unfortunately, Geno Smith's offense was limited by bad play-calling and Geno’s own greenhorn abilities.  Their loss to New Orleans was close.

Todd Bowles' defense is rounding into form. After demolishing Justin Fields and the Bears in the first half on Sunday, Tom Brady basically coasted through the second half.

After smacking the Chiefs in what should've been a really tough matchup, you have to take the Titans seriously in the AFC.  A.J. Brown was back in full force, and Ryan Tannehill looked as comfortable as he's been all year.

They need Ryan Fitzpatrick back.  More realistically, they need the 2022 offseason, so they can reset the position. QB Taylor Heinicke stayed mobile and played hard, but his crucial mistakes on key downs cost the Football team a win.  Another exceptional performance from Washington’s defensive line was wasted.