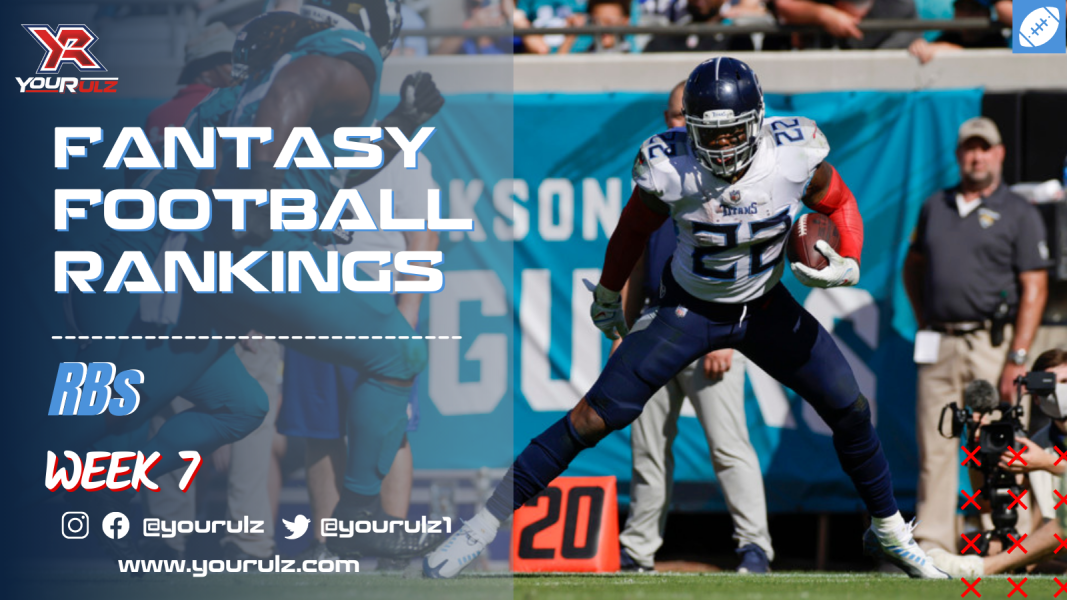 JACKSONVILLE, FL - OCTOBER 10: Tennessee Titans running back Derrick Henry (22) runs with the ball during the game between the Tennessee Titans and the Jacksonville Jaguars on October 10, 2021 at TIAA Bank Field in Jacksonville, Fl. (Photo by David Rosenblum/Icon Sportswire)

Derrick Henry is having a great year, even by his own lofty standards. The Chiefs can be thrown on, but they can be run on as well, and the Titans will try to keep Patrick Mahomes off the field as long as they can with Henry, but Henry has shown he can be valuable this year even in a shootout, so he is back on top.

Alvin Kamara sneaks back near the top as the Seahawks have a terrible defense and are fifth worst in pass defense to opposing running backs. And, while Washington has a great run defense, they are also bad against opposing running backs through the air, ranking third-worst, meaning Aaron Jones is still a top play here.

Leonard Fournette has seemingly grabbed complete control of the running back duties in Tampa, and has against a Chicago defense that tends to funnel to the run. That does not mean Tom Brady will stop throwing, but it does mean when Fournette gets his chances, he will be able to capitalize, just like in the recent, similar matchup against Philadelphia.

Darrel Williams showed he is able to take up the running back mantle in Kansas City and will have another soft-ish type matchup against the Titans. With the passing game looking like it will have success, it could mean more possessions for Williams to be able to accrue stats.

Joe Mixon has been getting the opportunities, but the matchup against Baltimore is harder than Mixon’s fellow fantasy running back peers, so he slips a little this week, but is still a great matchup. Alex Collins, however, has a much tougher matchup against New Orleans this week, and it a borderline sit this week in 10-team leagues.

With Nick Chubb and Kareem Hunt hurting, D’Ernest Johnson should pick up the start for the Browns this week. The Browns like to run, and will have Case Keenum as their QB this week, so we might see 20+ carries for Johnson against an overrated Denver defense, ranked 24th overall and 20th against the run this season.